BCS Realpolitik: Blood On the Tracks

In a perfect world, the Bowl Championship Series would not exist, and it can't go away fast enough. Until it does, though, we still live in the world we live in. So each Sunday night we'll examine what the new BCS numbers mean for the rest of the season. Rooting interest: Chaos. Always chaos.

Share All sharing options for: BCS Realpolitik: Blood On the Tracks 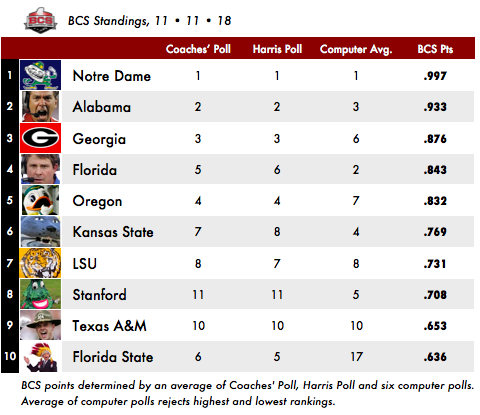 As chaotic and bloody as Saturday was at the top of the polls – as chaotic and bloody as the last three Saturdays have been, in fact, bringing us four losses by teams ranked in the top five, and very nearly a fifth – it's important to point out that the new status quo is just as clear as the one that was just overthrown: With two weeks to go, the golden tickets to the BCS Championship Game in Miami are now reserved for 11-0 Notre Dame and the winner of the de facto play-in game between 10-1 Alabama and 10-1 Georgia in the SEC Championship. No alarms, no surprises, no ambiguity. For those three teams (and those three teams only), it's win and you're in.

But after weeks of arguing over which undefeated team(s) were being set up for a snub, this is the last coherent contingency plan capable of earning anything like a consensus. If the Fighting Irish fail to close the deal next weekend at USC, all hell will reign.

• REALPOLITIK TOP TEN. My best guess at the championship pecking order – and we are grasping at straws here – goes a little something like this: 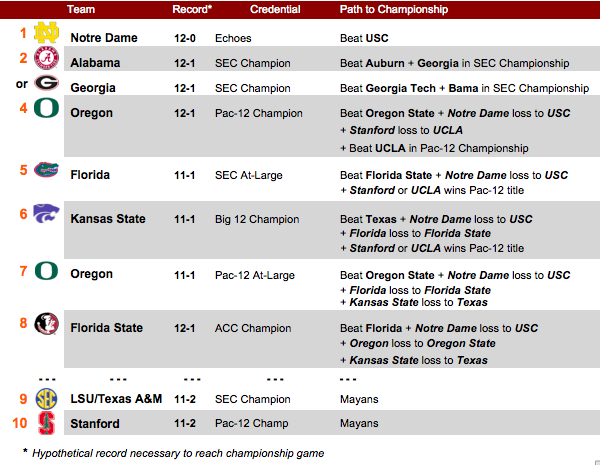 One scenario you'll notice I've avoided: An upset this weekend by Auburn or Georgia Tech over Alabama or Georgia, which could potentially throw the switch that ignites the whole thing. Because it's a conference game, an upset in the Iron Bowl would be especially chaotic, thereby knocking Alabama into a three-way tie for the West crown with LSU and Texas A&M, which is one of those A > B > C > A scenarios that defy all attempts at rational deduction. At any rate, the odds of Auburn actually springing the most outrageous trap in the history of the rivalry are too low to justify the new hoops we'd be creating for ourselves if we took them seriously. Which we do not.

Georgia Tech is not nearly as far behind Georgia, but the gap does appear wider than it's been at any point in the last decade, at least – a decade dominated by Georgia already – and the Yellow Jackets cannot knock UGA out of the SEC title game. If the inexplicable does go down (and a sentence that begins with that sort of sentiment can only mean that it will), just check off the latest victim and move on down to the next candidate on the list. 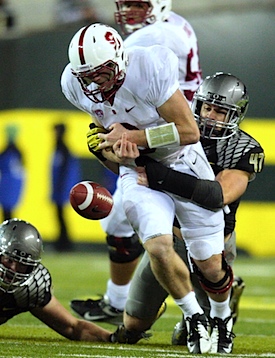 For our purposes, I think that team is Oregon – if the Ducks rebound from Saturday's overtime shocker against Stanford to win their four consecutive conference championship, anyway. At the moment, the question is out of their hands: With the head-to-head tiebreaker under its belt, Stanford can lock up the Pac-12 North Saturday against the freshly minted champion from the South, UCLA, thereby setting up a rematch with the Bruins in the Pac-12 Championship Game that is irrelevant for BCS Championship purposes because it doesn't include Oregon. The only way it still can include the Ducks is if a) UCLA beats Stanford on Saturday, clearing the path for Oregon at the top of the North, and b) Oregon beats Oregon State in its own finale, giving them a shot at claiming back-to-back, top-20 victims on the rebound. If they also claim another conference title in the process, it's going to be very hard for Florida – idle on championship weekend, regardless of what happens next week at Florida State – to hold the Ducks off.

If Oregon somehow loses in Corvallis, it might set off an interesting chain of events in the Pac-12 standings and/or bowl scenarios, but it will only affect the BCS title race in that Oregon will be eliminated.

• As for the Florida-FSU showdown: Although there is some inevitable speculation that the winner of Gators-Noles is only a big break or two away from punching its ticket to Miami, in FSU's case, we are talking about a big break. Several of them, actually, beginning with making a dent on its huge, ongoing deficit in the computer polls. Again this week, the Seminoles are languishing at 17th on average, more than ten spots below their rank according to the human polls, which both see the Noles as a ludicrously talented outfit finally making good on the hype. Their highest standing among the computers is 15th; one of the polls, Kenneth Massey's, fails to rank FSU in its top 25 at all. This is the same dynamic that's relegated them to the fringes of the top ten all season.

That has nothing to do with Florida State, necessarily, and everything to do with the computers' collective indifference toward the ACC, in general, and the back-to-back FCS cupcakes at the front of the schedule in particular. (That's not all Florida State's fault, either, but somehow the nuances of assembling a schedule in the midst of conference realignment are lost on an algorithm.) Beating a computer favorite like Florida will obviously hep to some extent, but at this point bridging the divide between man and machine looks like attempting to jump the Grand Canyon.

• The only other team that might still be holding out some quasi-plausible hope for dominoes to fall in its favor is maybe Kansas State, which crashed and burned in spectacular fashion Saturday at Baylor but can still clinch the Big 12 title by finishing off Texas in two weeks. In the meantime, three results this weekend could put the Wildcats back in the picture without their lifting a finger: USC > Notre Dame, Florida State > Florida and Stanford > UCLA. (In the latter case, Oregon State > Oregon would also do the trick, though it seems less likely.) Any of those games goes the other way, and that's all she wrote for K-State as a viable national contender in 2012, and for who knows how long to come.

• For chaos' sake. Again, a failure by Notre Dame to finish the drill at USC is the key to Pandora's box, which in these case looks like at least four equally viable one-loss teams at each other's throats for two tickets to the title game. If the Irish take care of business, it's all over but the shouting, most of it coming once again from the general direction of the ess-ee-cee.