Share All sharing options for: Stanford 17, Oregon 14: Don't call it a comeback

Stanford 17, Oregon 14 (Overtime).
- - -
1. The way this usually works is, we all stand agape and bow to the gods of chaos, whose erratic displays of mischief inevitably turn the month of November into a kind of serial allegory about life and death and hubris, or something, slowly panning back, week by week, to reveal a battlefield full of highly decorated casualties. In the case of Alabama succumbing to an ambush by Texas A&M, or Kansas State falling on its face at Baylor – a random land mine of a loss that follows no particular pattern, rhyme or reason – that may be entirely appropriate. In Oregon's case, though, perhaps the gods are simply telling Chip Kelly they don't like his kicker.

That may not be entirely fair to poor Alejandro Maldonado, who's not even a full-timer (he shares field goal and PAT duties with senior Rob Beard) but now is forced to bear the burden of sending Oregon's national championship ambitions wide left two years in a row: First in last November's earth-shaking loss to USC, where a win would have vaulted the Ducks into the top two in the BCS standings with two games to go, and again here in overtime, where a win would have entrenched them at No. 1. Same stakes, same spot on the field, same season-shattering result. And kicker notwithstanding, it comes back to the same root cause: Oregon's ongoing issues on the line of scrimmage against physical, overpowering defensive fronts.

2. Such a thorough exhibition of Duck wrangling demands a thorough accounting. Fourteen points is the fewest by a Chip Kelly offense since the 2009 opener at Boise State, Kelly's first game as head coach. It broke a 23-game streak in which they'd scored at least thirty. In terms of total yards, the output (405) was the lowest since the last time they saw Stanford, last November; yards per play (5.3) was the worst since last year's opener against LSU. It was the Ducks' worst night of the year for both converting on third down and scoring in the red zone. They tied a season high with eight punts. Individually, Kenjon Barner was held below four yards per carry for the second week in a row. De'Anthony Thomas managed just three yards receiving and 74 all-purpose, his worst effort the year on both counts. Fresh from a pair of near-perfect, breakout performances against USC and Cal, Marcus Mariota was pressured into season/career lows for completion percentage and efficiency.

Altogether, the Ducks failed on two fourth down tries in the first half, missed another crucial field goal in the second and finished with a 14-minute deficit in time of possession. Only then does it come down to the kicker.

3. So just how good is the Stanford defense? The numbers say "pretty damn good," especially against the run, where the Cardinal still rank No. 2 natiBnlly after shutting down arguably the most feared ground game in the country. But I'll go even a step beyond that and say I think it deserves a place right alongside Alabama, LSU, Florida State, Notre Dame and whoever else you got as one of the best in the country, hands down.

Consider: One year after losing four offensive mainstays who were taken among the first 50 picks of the NFL Draft – one of whom happened to be the top pick, and a two-time runner-up for the Heisman Trophy – the Cardinal have seized control of their destiny in the Pac-12 by beating offensively oriented teams ranked No. 1 (Oregon), No. 2 (USC) and No. 13 (Oregon State) nationally, while averaging just 20.7 points in those three games. 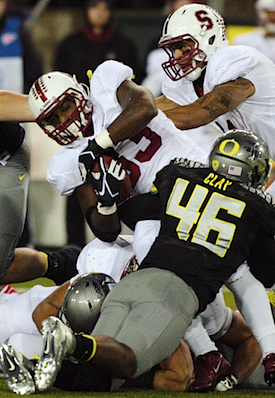 They also took the No. 7 team in the nation at the time, Notre Dame, into overtime in a game decided inches (or less) in terrible conditions on the road. Barely a month later, the Irish are the new No. 1, and still count Stanford (along with Pitt, of course) as its toughest test of the season.

4. Importantly, that's all with an offense that has continued to look very much like an offense replacement four high draft picks: Even after grinding out 411 yards against the Ducks, Stanford ranks 85th nationally in yards per game and 69th in scoring – which doesn't even account for the fact that it was actually the defense that accounted for both of the Cardinal's touchdowns in their only two losses. The starting quarterback at Oregon, Kevin Hogan, was a redshirt freshman making just his second career start in place of Andrew Luck's original heir apparent, the newly benched Josh Nunes, and did well enough to get out with only one turnover.

True, Stanford can still grind the ball with senior workhorse Stepfan Taylor, a consistent strength that's carried over from the Harbaugh years. (Taylor had 161 yards on 33 carries against the Ducks, making him the main factor in Stanford's huge advantage in time of possession – although he also lost a fumble, as well) But there is no reliable deep threat and no consistency in the passing game whatsoever. Meanwhile, the Cardinal are on track for the Rose Bowl with wins over Oregon and USC in which the Ducks and Trojans were held to 14 points apiece. That is the definition of a successful transition from a program-defining player.

5. There are circumstances under which Oregon can still win the conference – if it takes care of business next week at Oregon state and Stanford loses its regular season finale to the newly crowned South Division champ, UCLA, which is beyond "plausible" – and even climb back into the BCS championship picture if USC upsets Notre Dame. But this is unmistakably an opportunity missed: Unlike last year, when their late opportunity came with the asterisk of an opening night loss to LSU, these Ducks really were the most dominant outfit in college football over the first eleven weeks of the season. They were not backing into anything.

After the game, Chip Kelly was visibly stunned, as if he'd just seen his "inevitable" NFL future ripped away from him for at least another year. Assuming the drive for the only goal his emerging Death Star of a program has yet to meet on the college level is enough for Kelly to resist the siren lure of the League this winter, the only solace is that the proverbial "next year" remains a very real possibility for this team as long as Kelly is on campus.