UCLA 38, USC 28.
- - -
1. The lesson of last year's blowout in the Coliseum was that UCLA missed its chance. Prior to that, the window was open. After a decade on the wrong side of the rivalry – or the "L.A. Football Monopoly," as UCLA conceded in its notoriously failed prediction that balance would be restored under the Rick Neuheisel administration – the Bruins had made significant inroads in local recruiting, and the Trojans' status as West Coast overlords had evaporated with departure of Pete Carroll and the arrival of NCAA sanctions. There was an opening. Then USC dropped a 50-0 bomb on the Bruins, confirmed its resurgence among the national elite, doubled down on the "monopoly" and sent Neuheisel packing with four consecutive losses. And that was the end of that.

2. The fact that it was not the end of that, that it will be UCLA returning to the Pac-12 Championship Game instead of USC, that when the new polls are released on Sunday morning the Trojans will be absent, that they have all but sealed the worst finish by a preseason favorite in six decades, represents a historic failure by Lane Kiffin. This was his year, and he knew it. Even the peers who considered Kiffin an immature, unqualified climber – they knew it, too. Before Saturday's debacle, on the heels of back-to-back defensive debacles against Arizona and Oregon that obliterated all remaining national ambitions, opposing coaches looked at USC's descent and wondered how anyone who was shrewd enough to put himself in position to fall ass-backwards into one of the largest pools of raw talent in America could accomplish so little with so much at his disposal. After Saturday, a 180-degree turnaround explicable only in context of the coaching change on the opposite sideline, Kiffin's boss must be wondering, too. 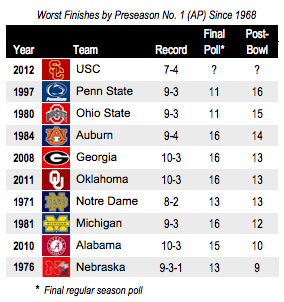 In Kiffin's defense, he didn't skip out on the media after the loss (not entirely, anyway), as tacitly suggested elsewhere. And he owned up to his responsibility for the chasm between potential and reality, albeit in that rote, quoting-from-the-manual sort of way that lends his media appearances the air of a teenager delivering a book report. For now, his boss says Kiffin's job is safe. This is still a team coming off two years of probation, in the midst of heavy scholarship reductions. The vast majority of the lineup will be playing in a bowl game in December for the first time, and then will be back in 2013, including the most outrageously productive, spectacular player in college football this season, Marqise Lee. (Ah, poor Marqise, how your efforts have been wasted.) Before that, they can still relish the idea of spoiling Notre Dame's bid for a perfect regular season and a ticket to the BCS title game next weekend. But that's only if they can forget that it was supposed to be the other way around.

3. Just like that, it's the city's other second-generation scion, Jim Mora, who assumes the mantle of conquering hero, toast of the town, etc., which is a testament to the redemptive glow of victory: At times, Mora has come across every bit as petulant and glib as his counterpart. (In retrospect, it's almost tempting to call Mora the "Lane Kiffin of the NFL" for his disappointing trajectory as up-and-coming head coach of the Atlanta Falcons and Seattle Seahawks, if Kiffin himself hadn't already claimed the title in his brief, disastrous tenure with the Raiders.) When you're a winner, it's all just part of the process. And Mora – for now – is the first unmistakable winner on UCLA's sideline in more than a decade.

Locally, the Bruins have bragging rights over USC for the first time since 2006 and are plausibly ahead of the Trojans on the program level for the first time since Carroll took over in 2001. Regionally, they'll be playing on Dec. 1 for their first conference championship since 1998. When the national polls come out on Sunday morning, UCLA will move into its highest position in five years, since the opening weeks of 2007, within sight of its first top-ten finish in 15 years. With wins in two of their final three, in any combination, the Bruins can claim eleven wins for the first time in school history. That's Year One. 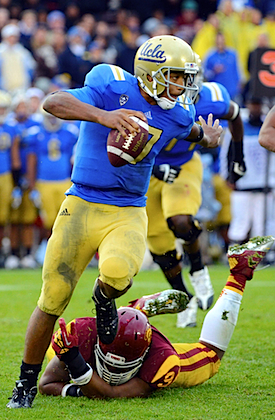 4. Frighteningly, it's still just Year One too for the Bruins' redshirt freshman quarterback, Brett Hundley, who joined Arizona's Matt Scott and Oregon's Marcus Mariota as the latest loping, dual-threat type to leave the Trojans' heads spinning in the last month. But he's done that to everyone: Eleven games into his career, Hundley has completed at least 63 percent of his passes, racked up at least 240 yards of total offense and accounted for multiple touchdowns in all eleven. Aside from a midseason lapse at Cal, where he served up four of his nine interceptions, Hundley's pass efficiency rating hasn't dipped below a respectable 135 in any game, and hasn't dipped below 150 since the stumble in Berkeley.

Over the course of UCLA's ongoing, five-game winning streak, he's completing 75 percent with a touchdown-to-interception ratio of 12-to-2 and an efficiency rating above 183, which is the kind of number that breaks records if sustained for much longer. But of course, those are only footnotes in the larger story, in which the underdog walked off the field as the best quarterback in Los Angeles.

5. Matt Barkley limped off the field with his right arm in a sling, the depressing symbolism of the lowest point in his career at least rivaling the pain of a separated shoulder. He was knocked out of the game on a blindside hit by Anthony Barr with a little over two minutes to play, on UCLA's only recorded sack, by which point the game and the fate of the Trojans' season was effectively in the books. Whether he's back in the lineup against Notre Dame or in a bowl game, Barkley's legacy as the blue-chip heir to the Trojan empire can be written, too. In four years, Barkley has overseen as many losses (14) as his four most recent predecessors (Carson Palmer, Matt Leinart, John David Booty and Mark Sanchez) endured in eight years, combined. When he arrived in 2009 as the most coveted QB recruit in the country, USC was on a streak of seven consecutive Pac-10 championships and accompanying BCS bowl bids, and took both for granted; Barkley will leave with no championships and no major bowl games. It may not be his fault, but as it turns out, his tenure will always be associated with the end of all that.

He won't be at the Heisman Trophy ceremony in New York, won't top any All-America teams and likely won't appear on the All-Pac-12 team. At this point, he almost certainly will not be the top pick in April's draft, as widely assumed when he passed up a certain top-10 slot last winter, and could conceivably fall out of the first round. As brilliant as he looked against UCLA in 2011, with the opportunity to ride into the sunset, he was every bit as dull Saturday in the first half, and unable to make up for it in the second. His final snap may have cost him millions.

Through all of that – the freshman spotlight, the coaching change, the sanctions, the sudden triumph of one November and the abrupt collapse of the next – Barkley has maintained a steady demeanor that consistently belied the chaos roiling around him. At times he seemed more levelheaded than either of his head coaches. He'll always be remembered as a quintessential nice guy who set a few records and remained loyal to USC at significant personal expense. But he'll never be one of the greats.