Michigan 42, Iowa 17: Ferentz at the Gates of Stale

No one has ever expected fireworks from Iowa, but even in the Ferentz era there's never been such a glaring lack of viable talent

Share All sharing options for: Michigan 42, Iowa 17: Ferentz at the Gates of Stale

Michigan 42, Iowa 17
- - -
1. Given Denard Robinson's track record at the position, I don't think it's productive to play "what if," but goodness, Michigan's offense looks like the complete package with the passing game outsourced to the arm of Devin Gardner. Robinson has always been typecast as a glorified tailback in the shotgun, anyway – that's what he was recruited to be by Rich Rodriguez – and seemed to be drifting even more inexorably in that direction before suffering the arm injury against Nebraska that's prevented him from throwing a ball over the last three weeks. Simply removing the pretense has opened up the last frontier of the offense downfield: Gardner connected on five passes covering at least 20 yards, Robinson got his with 122 as a rusher/receiver and the Wolverines went for 300 passing/200 rushing for the first time in two years under offensive coordinator Al Borges. They also scored touchdowns on each of their first six possessions, all on drives covering at least 60 yards. 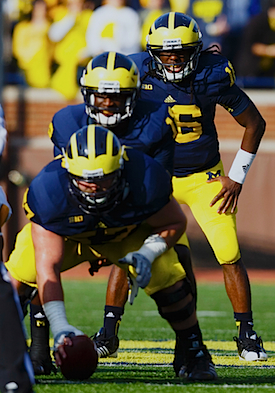 2. There's plenty to be written over the next six months re: Gardner's chances of beating out hot shot recruit Shane Morris as the heir apparent next spring (oh, and it will be), but as always, the only relevant question in November is what the new dynamic means for the Ohio State game. Last year, Robinson delivered the all-purpose game of his life against the Buckeyes, hitting 14-of-17 with three touchdown passes on top of 170 yards and two more scores on the ground in one of the most emotional wins in Michigan history. This year, before the injury, his track record as a passer against competent defenses – Alabama, Notre Dame, Michigan State, Nebraska – has been abysmal.

I don't think that changes the fact that if he can throw against Ohio State, he will, and not necessarily as a gimmick. But with Gardner's emergence over the last three weeks, and especially with the void left by the injury to top tailback Fitzgerald Touissant (see below), the line of demarcation between the quarterback and the "change of pace" should be clear.

3. This was my first extended look this season at Iowa, and for a program that's had 25 players drafted by the NFL over the last five years, the Hawkeyes look alarmingly like some random MAC team. (Which shouldn't come as a surprise, considering they actually lost to a random MAC team in September.) On both sides of the ball, the lack of viable talent is kind of shocking. The defense is Indiana-slow; on a couple of occasions you could almost see Gardner stifling laughter as he toyed with contain men in the open field. Of the 25 passes that left James Vandenberg's hand, exactly one ended up in the hands of a wide receiver, for a five-yard gain in the fourth quarter. Sixth-string running back Mark Weisman was a great story back in September, when there was no god in the Hawkeye backfield before AIRBHG, but since the start of B1G play Iowa's ground game has been arguably the worst in the league. Nothing happened today to contradict that. 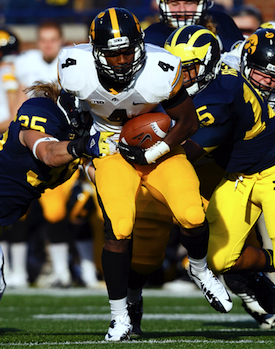 Not that anyone has ever expected fireworks from Iowa, but even in the Ferentz era there's never been such a glaring lack of ammunition as there is on this team. Inevitably, most of the blame has fallen on the offensive coordinator, Greg Davis, who is both a) The Hawkeyes' first new offensive coordinator since Ferentz arrived in 1999, and b) Obviously terrible. Davis is such a notoriously milquetoast play-caller he was widely despised and finally hounded out of Texas even after coaching both Vince Young and Colt McCoy to multiple BCS games. Surprise: He has not found renewed inspiration in the challenge of molding James Vandenberg.

4. This loss guarantees Iowa's first losing record since 2006, and its first with fewer than six wins since 2000. In the former case, the Hawkeyes were only a year removed from back-to-back-to-back Big Ten championships from 2002-04; in the second, they were still at the beginning of a seemingly hopeless rebuilding job. This time, the disappointment is a logical extension of the disappointment of unranked seasons in 2010-11 that both ended in the Insight Bowl. Already, Ferentz is doomed to spend 2013 under the same guillotine that's about to drop on Jeff Tedford at Cal. If he insists on sticking with Davis, the only head that will appease the mob will be his own.

5. Fair warning: As a human, you should not view the following video under any circumstances, ever.

Since you did, anyway, yes, your amateur diagnosis is correct: Toussaint was immediately taken into surgery and will not play again this season. (Gardner called the injury "heartbreaking.") Fortunately, Toussaint has another season of eligibility left next year as a fifth-year senior, and a couple hundred thousand people rooting for him to back to make good on it.