••Anthony Barr, LB, UCLA.
The Bruin defense played the pivotal role last year in Matt Barkley's rapid ascent to the top of mock drafts and preseason Heisman lists, agreeing to sit still while Barkley and his blue-chip receivers took turns lighting various members of the secondary on fire in a 50-0 debacle that immediately set free the specter of Trojan juggernauts past. One year on, that narrative has been turned on its head by UCLA's resurrection under first-year coach Jim Mora and USC's sobering descent from the top of the polls. But at least one part of the 2011 equation is still true: Left to its own devices, the UCLA secondary still cannot handle Robert Woods and especially Marqise Lee, who burned the Bruin for 224 yards and two touchdowns last year as a true freshman and is currently in the midst of one of the most prolific all-purpose tears in NCAA history.

What UCLA can do, however, is make Barkley's afternoon so miserable as to make his top targets irrelevant – or at least at least keep them quiet enough for the very capable UCLA offense to keep pace. Easier said than done, of course, but it has been done, by Stanford, which sacked Barkley four times and hit him on almost every play in a 21-14 upset back in September. Neither Woods nor Lee caught a touchdown pass in that game, or any pass longer than 24 yards, and Barkley was so disoriented he served up two interceptions in the second half that coach Lane Kiffin called "probably two of his worst decisions in our three years together." Barr comes into today's game with more sacks than any other pass rusher in the conference and a clear target for getting his team back to the Pac-12 Championship Game.

••Michael Clay and Kiko Alonso, LBs, Oregon
While the rest of the defense around them has been converted into an emergency M.A.S.H. unit for the home stretch, the Ducks' leading tacklers are both a) Healthy, and b) Squarely in the line of fire of Stanford's straight-ahead, power-oriented ground game. Oregon hopes to have most of last week's causalities back in the fold tonight, including defensive tackles Issac Remington and Ricky Heimuli, who will be key to occupying Cardinal blockers and giving Clay and Alonso a clean path to the ball. 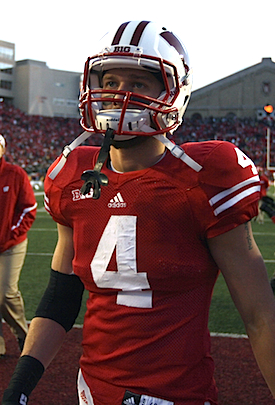 The better the Badgers are playing, the less it occurs to them to put the ball in the air, which has made their best receiver something of a forgotten man as a more familiar Wisconsin ground game has begun to emerge from an uncharacteristically meek start. Over the first half of the season, Abbrederis picked up some of that slack, bringing down 27 receptions with five touchdowns in five games, including three straight games over 100 yards. He also had five catches covering at least 50 yards. In the last four games: Eleven receptions, zero touchdowns, zero catches covering 50 yards, and only one (a 42-yarder against Minnesota) that went for at least thirty.

Last week, Abbrederis had one catch for 14 yards, which is just fine when the rest of the offense is busy setting a new school rushing record against Indiana. That won't do against Ohio State, where the demand for a big strike or two to keep the Buckeye safeties from creeping up against the run – or to make them pay for it – will be higher than at any other point this season. So far, aside from Abbrederis, literally no one else on the roster has proven himself capable of delivering it.

••Andrew Buie, RB, West Virginia
In the last game the Mountaineers won – if you can remember that far back – Buie went for 207 yards on 31 carries in a surprisingly ground-oriented, 48-41 win at Texas. In the meantime, Buie has averaged just 14 carries per game and the ground game has been increasingly nonexistent during WVU's four-game losing streak.

Some of that, of course, has to do with the fact that the offense has had to keep the ball in the air to have any chance of offsetting an astonishingly porous defense. Dana Holgorsen has never been as pass-happy as his one-dimension, mad-bomber reputation suggests, and his team has virtually no chance of ending the skid against Oklahoma without some semblance of ball control.

••Nigel Malone and Allen Chapman, CBs, Kansas State
As a threat to K-State's perfect record, Baylor has one thing going for it: The nation's most up-tempo, balls-to-the-wall passing game, in particular its leading receiver, Terrance Williams, who comes in averaging more yards per game (159) than any other FBS receiver and more yards per catch (18.6) than anyone with at least 50 receptions. Kansas State is more than willing to play tortoise to Baylor's hare. But with free safety Ty Zimmerman likely out with an injury, the burden falls even more heavily on its senior corners to keep the offense from being drawn into an honest-to-god shootout for the first time this season. Which is the only plausible circumstance in which the Wildcats' season gets away from them.