Farewell Tours: On Jeff Tedford, on his way out

Barring a miracle at Oregon State, or cold feet over Tedford's massive buyout , the next facelift at Cal will begin in earnest with the head coach

Share All sharing options for: Farewell Tours: On Jeff Tedford, on his way out

1. By any relevant measure, Jeff Tedford's first decade at Cal was the best in Berkeley since the post-World War II heyday of Lynn "Pappy" Waldorf, culminating last year in the completion of a massive, multiyear renovation of on-campus facilities and Tedford's passing Waldorf as the winningest coach in school history. Tedford rebuilt a crumbling program quite literally from the fault line up. By the end of the weekend – barring a miracle in Saturday's season finale at Oregon State, or cold feet over Tedford's massive buyout – the next facelift will begin in earnest on the sideline.

Given the heights of the first half of the Tedford era, the tremors on the verge of toppling it began before anyone was in any position to recognize them as such, and they've continued to radiate outward with increasing intensity. Coming into this season – the worst under Tedford, by far – the Bears hadn't beaten a team that finished in the top 25 in three years and hadn't landed in the final polls themselves in five. In the same span, they've been lapped in the Pac-12 pecking order by Oregon, Oregon State and Stanford, and now Oregon State again. They've ceded the mantle of upward mobility on the West Coast to Washington, which drove the point home further in January, when it swiped one of the remaining pillars of the Tedford regime by luring ace recruiter Tosh Lupoi at the expense of what was shaping up as a blockbuster class for Cal. (The most hyped recruit in the state, Sacramento safety Shaq Thompson, followed Lupoi to Seattle; fellow blue-chips Ellis McCarthy and Jordan Payton subsequently defected from Cal to UCLA.) Of the other eleven head coaches in the conference, nine of them have been in their current jobs less than four years; fully half are in their first or second years. Surrounded by younger, hungrier blood, the inertia in Berkeley has drifted well past the point of no return.

2. Locals with a better vantage point for making out the trees for the forest have a long list of grievances and explanations for the decline, including volatility on the coaching staff (the offensive coordinator position alone has changed hands six times in eight years) and a corresponding failure to develop a recognizable identity on offense. Tedford has been too much of a hands-on technician, incessantly tweaking and expanding the playbook at the expense of execution. Around the program, team chemistry has been a recurring issue for years.

But regardless of the why, there can be little doubt about the when: Oct. 13, 2007, in Berkeley, against a nondescript edition of Oregon State. The Golden Bears began the day ranked No. 2 in the polls, their highest standing in 56 years, and needed only a late touchdown to take over the top spot in the wake of Kentucky's upset over No. 1 LSU earlier the same day – or, failing that, a short field goal to force overtime. They got neither.

Before Kevin Riley's ill-fated scramble, Cal had won 38 of its previous 48 games, spent 50 of the previous 55 weeks in the top 25 and claimed a share of the conference championship in 2006 for the first time since 1975. After the loss to OSU, the Bears dropped five of their next six to close the regular season, and haven't come within three games of a conference or division title in any of the subsequent five seasons. They've lost nine straight to USC, four straight to Oregon, four straight to Washington and three straight to Stanford. Since rising to No. 19 over Thanksgiving weekend, 2009, the Bears haven't appeared in the polls at any point in the last three years. 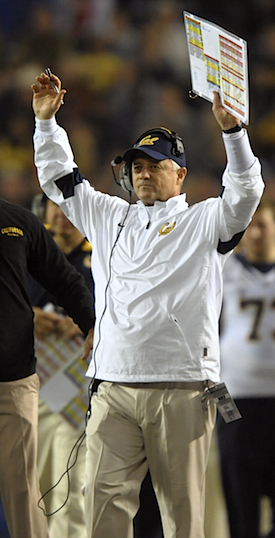 3. Ironically enough, given Tedford's career-defining track record as a quarterback guru par excellence, the reliable succession of first-rate passers was the first pillar to fall. His first two starters in Berkeley, Kyle Boller and Aaron Rodgers, both made the leap from obscurities to first-round draft picks, with the records to show for it. None of the subsequent four starters since 2005 – Nate Longshore, Kevin Riley, Brock Mansion or Zach Maynard – has earned so much as a second glance from pro scouts, or the all-conference teams. Worse, they haven't developed over the course of their careers: Longshore and Riley were both better as sophomores than they were as seniors, and Maynard has spent too much time on his back the last two years to tell the difference. Injuries forced all three to spend large chunks of their final seasons on the bench, by which point the fans had already begun to align behind the next guy in line.

4. But the fact is, from 2004 on, there always seemed to be one less guy the offense could hang its hat on than there was the year before. The dominant '04 team was loaded with prolific all-conference talent at quarterback (Rodgers), running back (J.J. Arrington and Marshawn Lynch) and receiver (Geoff MacArthur). The 2005-06 teams, while missing the headliner at quarterback, boasted future first-rounders in Lynch and wide receiver DeSean Jackson. When the passing game took a pedestrian turn in 2008-09, there was still Jahvid Best to supply the big-play spark out of the backfield.

The last two years, that guy has ostensibly been Keenan Allen, who is both the most hyped and (on paper, anyway) the most productive receiver Tedford has recruited. But if that has meant anything to the bottom line, it's only to drive home just how pathetically punchless the Bears would be – and have been for the last two weeks – without him. Through eleven games, Cal ranks in the bottom half of the Pac-12 in both yards and points allowed for the third year in a row, and has been blown out by at least 17 points on four different occasions. From 2002-08, Cal lost exactly two games by that wide a margin, one of them against USC's unstoppable 2005 juggernaut. From 2009-12, Cal has lost 15 games by that wide a margin, with one more to go.

5. Respect for Tedford's tenure as a whole and his role in resurrecting Cal football from decades of perpetual irrelevance remains high, but even the loyalists realize at this point there is probably no realistic scenario in Corvallis that can turn the tide of five years of stagnation. The Bears cannot go to a bowl game, cannot crack .500 and cannot change the fact that they finished 2-5 in their expensively refurbished stadium. Cal fans are resigned enough to Tedford's fate that much of the past month has been spent vetting potential replacements. Recruits can read the writing on the wall along with everyone else. Whatever the result of Tedford's postseason meeting with his boss on Sunday, it has almost certainly already been decided. Win or lose, if Tedford is back in his office on Monday, it will be a staggering upset for his buyout.