Around the Scorn: The last days of Denard

Michigan sends off the face of the program, Oregon counts the walking wounded and UCLA students display a healthy attitude toward their cross-town rivals, all in today's roundup.

Share All sharing options for: Around the Scorn: The last days of Denard

• . Saturday's visit from Iowa will be Denard Robinson's final home game at Michigan Stadium, and it's looking increasingly likely that the most exciting player in Wolverine history will be spending it on the sideline:

Michigan is not making Robinson, the face of its program the past three seasons as he confounded opponents, wowed crowds and became a marketer’s dream, available to the media this week to discuss his Michigan experience before his final home game.

He might not play, either. Hoke would only say Robinson is "day-to-day" when asking about his availability, whether he'd be used at a role other than running back [sic] and also what he thought about whether or not fans would be disappointed not to hear from Robinson before his final home contest.
[…] "Any time a guy can't finish the way that they'd like to, because of injury or whatever, you're disappointed," Hoke said. "They are all our sons."

Brady Hoke: Still randomly emo when you least expect it. 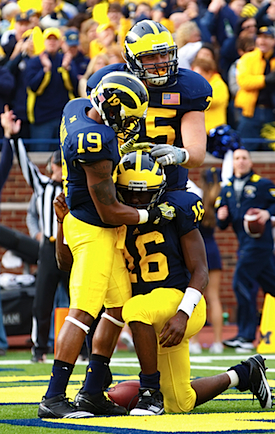 There's still time after this weekend for one final blaze of dreadlocked glory against Ohio State or (more likely) in the bowl game – which could still conceivably be the Rose Bowl, if a giant meteor lands on Nebraska quarterback Taylor Martinez at some point in the next ten days – but there's no denying the disappointment in watching Robinson's career go out with a whimper. It's not only the injury: Before he was hurt against the Cornhuskers, Denard was already limping through his worst season as a passer, a byproduct of his awkward marriage to an offensive coordinator, Al Borges, who either refuses or simply doesn't know how to exploit fear of a running quarterback in the passing game. Devin Gardner has looked like a much better fit in his first two starts since moving back to quarterback from wide receiver, wins over Minnesota and Northwestern that stand as arguably Michigan's best offensive outings of the season. At the very least, Gardner has been the more efficient passer, and there doesn't seem to be any particular hurry to rush Robinson back.

If Denard does play against the Hawkeyes, it will probably be limited to a handful of token snaps, possibly as a running back or receiver, for the sake of getting him on the field/in front of the crowd one last time. (And of course, for giving the Buckeyes a little extra something to prepare for next week.) It almost certainly will not be a fitting culmination to the last three years, unless you see them mainly as occasional flashes of brilliance amid a slow, steady decline from his initial, impossibly prolific burst in 2010. Michigan is a much better team and program now than it was then, mainly because Hoke and defensive coordinator Greg Mattison – unlike their predecessors – still grasp the basic concept of preventing opposing teams from scoring. But the thought of Denard Robinson going out with three years under his belt in the "Spread 'n Shred" still makes for one hell of a vision.

• ACHES LIKE A DUCK. Oregon tends to be pretty tight-lipped about everything, especially injuries, so we don't have an official body count on the plague of injuries that has ravaged the Duck defense this season, but the casualty list for last Saturday's 59-17 romp over Cal included at least nine regulars, including the entire starting defensive line:

The front four was so decimated that it was forced to turn to three true freshmen, Arik Armstead, DeForest Buckner and Alex Balducci (who burned a redshirt), and newly converted tight end Koa Ka'ini, who spent the first two months of the season on offense. The secondary is desperate enough to at least consider commandeering do-it-all offensive star De'Anthony Thomas for the defense Saturday with the Pac-12 North on the line against Stanford. The good news (or not so good, if you're Stanford) is that the Ducks should be getting a few of those bodies back by the weekend.

The Ducks' pregame two-deep for Saturday's game against Stanford includes a starting defensive line of Taylor Hart, Ricky Heimuli, Isaac Remington and Dion Jordan. Hart was injured in the first half at Cal and wasn't in pads after halftime, and the other three dressed but didn't play due to injury.
[…]
Also, sophomore cornerback Dior Mathis said he should be available against Stanford, after not making the trip to the Cal game. Kelly declined to comment on reports that running back De'Anthony Thomas is being prepared for possible emergency duty at corner, but Mathis said Thomas has looked "good" and that, "He's De'Anthony; he can do anything he wants to."

That may be the case – as a recruit, Thomas was apparently planning to play cornerback at USC before he flipped his commitment to Oregon – but from Stanford's perspective, if given the choice, I think I'd prefer to see Mamba on defense for as many snaps as possible, if only because it increases the odds of seeing a little bit less of him with the ball in his hands on offense or in the return game. Only a little bit, probably, but you know: Every little bit helps.

• EDITED BY DBG. Dorial Green-Beckham isn't having a banner season, statistically, but the most hyped freshman in the 2012 recruiting class did prove in Missouri's quadruple overtime win at Tennessee that he's getting more comfortable in the crucial aspect of making shit up on the fly:

With the Tigers down a touchdown and facing fourth-and-12 with less than a minute to play, Dorial Green-Beckham, the freshman wideout who hadn't caught a pass all day, took what might be remembered as his first step toward becoming a seasoned star receiver. Lined up in the left slot, Green-Beckham was supposed to run a 5-yard pivot route, a last resort for quarterback James Franklin, whose first read was [wide receiver T.J.] Moe cutting into the middle of the field from the right side.

But just before the ball was snapped, Green-Beckham shouted to Franklin and started scribbling on his palm. That much Franklin explained after the Tigers' 51-48 quadruple-overtime victory, but after digesting the play on video the last couple days, teammates and coaches had a chance [on Monday] to marvel at Green-Beckham's improbable improvisation.

"He told James, 'In case you don't throw it to me right away, I'm going to go down the sideline,' " [wide receivers coach Andy] Hill said.

Sure enough, Tennessee's defense clogged up the routes to Franklin's right and the quarterback started scrambling. Green-Beckham was on the move, too, far away from the spot where he was supposed to stop his pattern.

"He did his 5-yard outlet, didn't even turn and look for the ball, ran up the sideline and stood there wide open," Moe said.

If When Derek Dooley loses his job, at least he can take some solace in the fact that the dagger was delivered by a true freshman who immediately spotted the weakness in the defense before the biggest play of the game. They grow up so fast!

• PROTECT THE DISRESPECT. You know who really gets the whole "cross-town rivalry" thing in L.A.? UCLA students, man: 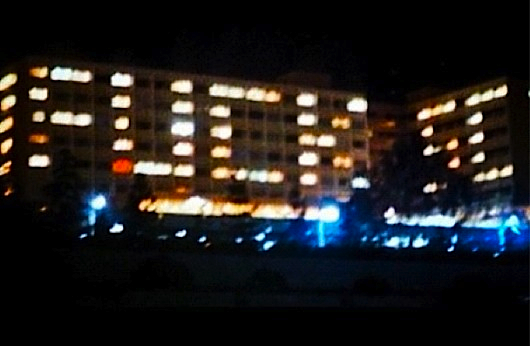 You know who doesn't get it? A bunch of "responsible adults" in charge worried about some bullshit like "cooperation" and "mutual respect":

In the spirit of cooperation and sportsmanship and at the request of the UCLA Athletic Department, the USC Trojan Marching Band drum major will not stab the field before the game Saturday.

It was decided by Trojan Marching Band Director Dr. Arthur C. Bartner after meeting with UCLA game management that it was in the best interest of both universities to suspend this tradition at this game.

"It is important to protect a great rivalry and to conduct it in the most mutually respectful way possible," said Dr. Bartner.

Like, gag me with a spoon. What is actually important in a rivalry is forging a fun, productive outlet for two of our most destructive human instincts, tribalism and arbitrary hatred, without the actual destruction. Everywhere else you have to play nice like good boys and girls in a modern civilization that has evolved past such primitive imperatives as tribes and hair; here, once a year, simulated territorial warfare and campy mock-violence is the entire point. Thank god for the students, who will always remain true barbarians at heart.

QUICKLY…
• A detailed examination of where it all went wrong for Jeff Tedford.
• Holly Anderson has some helpful mnemonics for remembering the new divisional breakdown in the Big East.
• Bruce Feldman examines the lure of MAC-tion.
• Kirk Ferentz gets a little testy.
• For some ill-advised reason, Robert Nkemdiche's mother reads comments about her son on the Internet.
• Another Grayson High prospect, David Kamara, follows Nkemdiche in decommitting from Clemson following a weekend visit to Ole Miss.
• Tajh Boyd says his future at Clemson is "up in the air."
• The Big 12 tells Tommy Tuberville to play nice with his assistant coaches.
• "That's what the SEC likes to call 'getting paid.'"
• Even people who could care less about college football are suddenly interested in Johnny Manziel.
• Heisman voters may be a little too enamored with Collin Klein.
• And you just know Bill Snyder is sitting calmly at his desk like Michael Corleone right now while newsstands across the state of Kansas are methodically pillaged and burned.