Last week, one of my colleagues at CBS, Tom Fornelli, worked up a sort of "blind taste test" that allowed readers to judge five of the six remaining undefeated teams at that time (excluding Ohio State) based on five relevant criteria measuring strength of schedule, margin of victory, and so forth, etc. More than 61,000 people cast votes in that poll, and without knowing the identity of the teams they were voting for, a huge majority of them – more than two-thirds – chose Notre Dame as one of the two teams that deserved to play for the national championship based on those criteria. (More than half of the voters thought the Irish should be matched against Kansas State.) The top two teams in the mainstream polls, Alabama and Oregon, didn't come close to that level of support combined.

Looking at the numbers in that exercise, my initial instinct was to opt for Notre Dame, too, which you might think would make me more inclined to give them the benefit of the doubt in this space, especially with the inevitable reassessment at the top following Alabama's loss to Texas A&M. But the effect was the exact opposite: Rather than opening my eyes to the Irish's unsung virtues against a difficult schedule, it only sharpened my focus on the caveats that have relegated them to the on-deck circle re: the BCS Championship Game and will keep them there barring an Oregon or K-State stumble – this, in a system that has often been assumed to be somehow rigged in the Irish's favor over such un-pedigreed nouveau riche. Since when have pollsters under-valued Notre Dame?

It's telling that the Fighting Irish look better on paper (and in computer polls) than they do to people who have actually seen them play. More to the point, we've seen them struggle, in ways that the "margin of victory" column doesn't quite communicate: First against Stanford, a game decided on a controversial call in overtime, then against Pittsburgh, a rank mediocrity that took the Irish to triple overtime, in South Bend, and repeatedly failed to put them away when it had the chance. Initially, my idea for this post was to make a case for Notre Dame as Oregon and K-State's equal, which surely would have resonated a few weeks ago, after the Irish's convincing, season-making upset at Oklahoma. But I keep coming back to this…

…and that's pretty much the end of that line of thought. Another CBS colleague, Dennis Dodd, has a forthcoming column on why the Irish seem to be such unanimous afterthoughts in the championship discussion despite the perfect record – and despite being, you know, Notre Dame, finally back to where it belongs after two decades in the wilderness – and I think there really is nothing more to it than the fact that they probably should have lost to Pitt.

Just as importantly, we've also seen the Ducks and Wildcats consistently avoid such a borderline existence. Oregon hasn't played a game decided by single digits, and neither of K-State's closest calls – 24-19 over Oklahoma and 27-21 over Iowa State, both on the road – were nearly as harrowing as the scores suggest; the Wildcats led both games by double digits in the fourth quarter, and neither Sooners nor Cyclones really had a chance to make it interesting following their final, ultimately cosmetic scores.

I'm certain that plenty of Notre Dame fans and at least two mainstream pollsters who voted Notre Dame No. 1 this week – one in the Coaches' poll, one in the Associated Press – would accuse me of falling under the lure of "style points," or whatever, which is probably true to an extent. Once you're resigned to the necessity of splitting hairs among three good, worthy teams, though, what else is there? 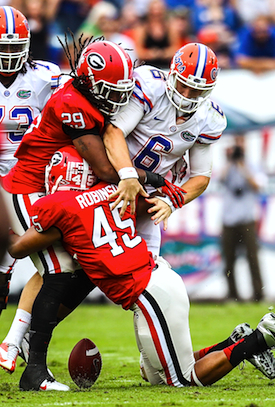 • COCKTAIL CONUNDRUM. I certainly can't be accused of falling for the prettier scoreboard in my decision to keep Georgia, a 38-0 winner over Auburn to wrap up the SEC East, behind Florida, which turned in its worst game of the season Saturday in a skin-of-the-teeth, 27-20 escape against Louisiana-Lafayette. Understandably, it's a lonely club these days: I'm still pretty much the only person doing this on a weekly basis who continues to insist on rewarding Florida's wins over LSU, Texas A&M and South Carolina over Georgia's head-to-head win over the Gators, even as the teams appear to be drifting in opposite directions over the past month. As well as UGA has played en route to the division crown – I think this is a much better team than the one that took the East last year – I can't get past a schedule that conveniently omits Alabama, LSU and Texas A&M in the cross-division exchange.

The fact that Florida has wins over two of those teams carries a lot of weight with me, as does the fact (if you really want to get into the head-to-head business) that the Gators crushed South Carolina just a couple weeks after South Carolina crushed Georgia. But all of that notwithstanding, it will be the Bulldogs with another chance to silence the skeptics in Atlanta, and if they hoist the giant "SEC" sign there you can rest assured, they will get their due here.

• COLUMBUS DAY. More on Ohio State's unusual position to come later this week, I hope, but for now I'll only say this: A convincing win this weekend at surging Wisconsin, and the Buckeyes will be due for a short but very significant leap. Overdue.

• GOT THOSE STUCK IN THE ACC ATLANTIC BLUES. Although I still have Clemson several spots below the consensus, I still feel like I'm being soft on the Tigers' mincing schedule by moving them into the top 15, however grudgingly. Considering their best win is still over Duke, at least the Tigers are cruising with reassuring authority since getting TKO'd at Florida State in September. But I'll believe they're a top-10 outfit when they show it against South Carolina. 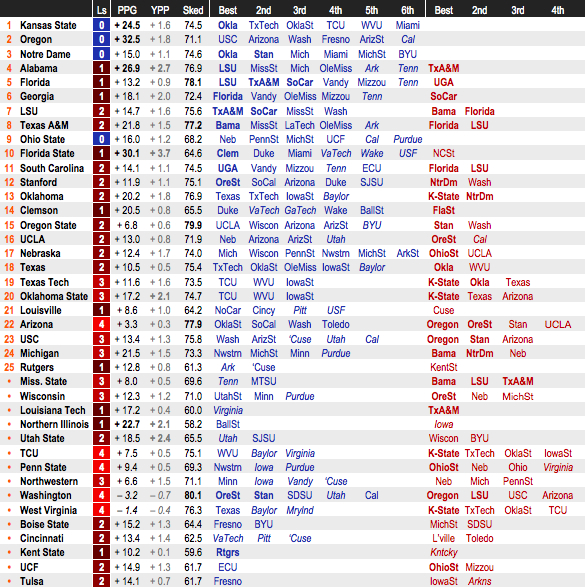