BCS Realpolitik: A good compromise leaves everyone looking up at Kansas State

Share All sharing options for: BCS Realpolitik: A good compromise leaves everyone looking up at Kansas State 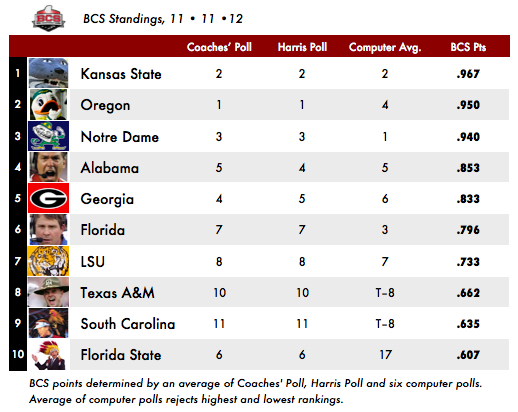 In his classic book on the Kennedy Administration, The Best and the Brightest, David Halberstam explained the decision to appoint Dean Rusk as secretary of state by describing Rusk as "everybody's number two" – the most acceptable compromise among colliding factions. So it is with Kansas State, newly installed at the top of the BCS standings for the first time in school this week despite its second-place standing in both relevant human polls (as well as the Associated Press poll, for that matter) and the consensus of the computer polls. In the void left by the untimely demise of everybody's number one, Alabama, the human voters overwhelmingly nominate Oregon, owner of the nation's widest margin of victory at 32.5 points per game; the computers, still barred from considering margin of victory, are united behind Notre Dame's rough-and-tumble schedule instead. For now, anyway, they meet in the middle in Manhattan, Kansas. Let's hope it works out better for Bill Snyder than it did for Dean Rusk.

Unfortunately for Realpolitik purposes, that doesn't leave much room for debate: If K-State and Oregon win out over the next three weeks, it's a foregone conclusion that the only two invitations to the championship ball in Miami will be theirs. Barring some kind of mathematical miracle – the Immaculate Calculation? – the numbers for a late Notre Dame surge just aren't there. Even if the Irish sew up a 12-0 finish by putting USC out of its misery in two weeks, the Wildcats and Ducks both have games left themselves against at least one team currently ranked higher than USC, negating any significant strength-of-schedule gains. (Here's guessing a few coaches getting the sniffles thinking about Tony Rice and the "Bush Push" won't be enough to close the gap in the human polls.) Already there is nowhere for the Irish to go in the computer polls but down; with Oregon ramping up for dates with Stanford, Oregon State and the USC/UCLA winner in the Pac-12 Championship Game, the Ducks' computer average only stands to improve, and their edge on the second golden ticket right along with it.

On the bright side for Irish fans, with one piece of the puzzle unexpectedly falling into place in Tuscaloosa, there's always some realistic hope that the other piece will drop in the form of an Oregon or K-State loss down the stretch. This time of year, random spasms are par for the course. But Notre Dame can't take the final, crucial step without one, and time is beginning to run out.

• REALPOLITIK TOP TEN. With that, taking into account all possible scenarios at the end of the season, here's the most likely pecking order for tickets to the BCS Championship Game, with a dividing line separating sheer fantasy from plausible reality: 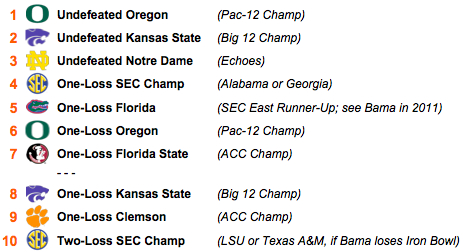 Between them, the Big Three at the moment have seven more opportunities to lose, all of them (save maybe Notre Dame's date with Wake Forest this weekend) realistic opportunities. If two of them come true, the winner of the Alabama/Georgia affair in the SEC Championship Game is back in the driver's seat. 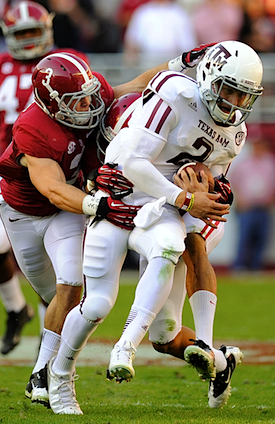 • RUMORS OF OUR DEMISE HAVE BEEN GREATLY EXAGGERATED. Chasing a slightly more farfetched thread on the same note, it's not difficult to see how late losses by all three of the top contenders at this point could set us down the path toward another all-SEC rematch: After those three, the next six contenders in line are all SEC teams. The "cleanest" scenario – once we've cleaned up the blood from the carnage at the top necessary to make this happen – would pit Florida against the Bama/UGA winner in Atlanta. If Florida is bumped from the queue by Florida State in its finale, the baton could conceivably keep falling down the line, to LSU or surging Texas A&M… or it could wind up back in the hands of one of the fallen frontrunners on top at the moment, particularly Oregon, which has the best chance of redemption in the Pac-12 Championship Game if it goes down in the next two weeks against Stanford or Oregon State – assuming, that is, that the stumble doesn't send the Ducks tumbling out of first place in the North Division, which a loss this weekend against Stanford most definitely would.

If it came to that, Oregon's only chance would be a subsequent UCLA win over Stanford on Nov. 24, to ensure the Cardinal's second conference loss and move the Ducks back into the title game. But that scenario is so far down the rabbit hole, it would almost certainly have to include…

• DOES NOT COMPUTE. The main reason I haven't floated Florida State among the other contenders at the top of the SEC ticket is that the computers continue to hate Florida State. Despise it: Of the six computer polls, none ranks FSU higher than 14th, and two of them (Kenneth Massey's and Jeff Sagarin's) omit the Noles from their top 25 altogether. Florida State's average computer score is .290, tied with USC for 17th-best nationally, just a hair below Michigan and above Washington. Finishing the drill with a win over Florida and over Miami or whoever in the ACC Championship Game would change that equation pretty significantly, but the Noles may be too deep into the quicksand that is the ACC schedule to get out if things above them start to go haywire.

• FOR CHAOS' SAKE. Real mischief requires either all three frontrunners remain unbeaten, thereby screwing Notre Dame – Notre Dame, of all teams – out of a title shot it obviously deserves, or all three lose, leaving the voters and mainframes to ward through a swamp of one-loss outfits, from which another SEC rematch could very well emerge. On one hand, the clearer it becomes that Notre Dame is on the outside of the championship game looking in, the more confused and incensed casual fans are going to be. On the other, any hint of reflexive, arbitrary favoritism toward the SEC if there's an opening at the top will drive the skeptics insane. It's increasingly an all-or-nothing proposition.