Reaction Time: Stanford makes its stand, between Ducks and the promised land

Reflections on Saturday's games, from Sunday

Share All sharing options for: Reaction Time: Stanford makes its stand, between Ducks and the promised land

1. Oregon 59, Cal 17
Oregon's ascension under Chip Kelly is awe-inspiring in many ways, but the part that always leaves me shaking my head is just how quickly the Ducks can turn a legitimately tight, competitive game into a laugher, as a matter of routine. On Saturday night, for example, Oregon led the Golden Bears just 24-17 midway through the third quarter, with half its starting defense sidelined by injury and the home crowd beginning to sense a little wind at their team's back following a touchdown on Cal's first possession of the second half. 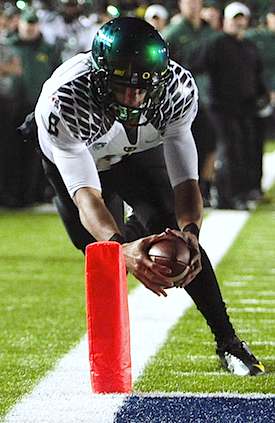 Then the Bears made a mistake, an interception from the arm of backup quarterback Allan Bridgford, and the Ducks swarmed like a pack of sharks getting a whiff of fresh blood: In a span of ten minutes, Oregon ripped off four consecutive touchdowns, extended the lead from seven points to thirty-five and retired the rest of its starters to a leisurely vacation on the bench for the bulk of the fourth quarter. In that window alone, redshirt freshman Marcus Mariota was 8-of-9 passing for 152 yards and four touchdowns, and ended the night as the most efficient passer in the nation.

They do this all the time. It's like entering some kind of vortex and coming out on the other side to find both of your legs missing.

2. Stanford 27, Oregon State 23
That said: Stanford strikes me as exactly the kind of defense that can give Oregon trouble next week with the Pac-12 North on the line, because it's exactly the kind of defense that's given Oregon trouble in the past. For all intents and purposes, the Cardinal are an SEC-caliber front seven: Besides leading the conference in total and scoring defense, they also lead the nation in rushing defense, sacks and tackles for loss for the second week in a row. Of the six games Oregon has lost since Kelly took over as head coach, five of them – vs. Boise State in 2009, Ohio State in the 2010 Rose Bowl, Auburn in the 2011 BCS title game, LSU in last year's season opener and USC last November – have come against teams with deep, disruptive defensive lines featuring future draft picks. Stanford has that kind of front, and the kind that can make Mariota's life miserable in the pocket if the Ducks become too one-dimensional, as Matt Barkley can attest.

Obviously, the question from there is whether the Cardinal can do enough on offense to take advantage of that, which is still a dicy proposition: Although redshirt freshman Kevin Hogan connected on three touchdown passes Saturday in his first career start, he was also picked twice, and the offense stalled for most of the last three quarters after a pair of quick scores in the first. If not for a late Oregon State fumble that set up a short field for the winning touchdown, we might be having this conversation about the Beavers right now. Aside from an obligatory blowout at Colorado a couple weeks back, Stanford's best offensive effort on the road came in a 21-3 win in Berkeley, in which all 21 points came in the first half, and the last seven were set up by a turnover deep in Cal territory.

3. Kansas State 23, TCU 10
Once the Collin Klein question had been settled, this was a routine, by-the-book snoozer of a game, i.e. the platonic manifestation of a the perfect Bill Snyder game plan. Klein looked ordinary, K-State fell well short of 300 yards of total offense for the first time this season, and the outcome was never in doubt after the first quarter. TCU's only points came on a pair of meaningless drives in the fourth, the touchdown coming with 47 seconds left – not that there's anything wrong with that, because winning by 20 points is just a little too… I don't know, loud.

At this point, of course, it's also entirely unnecessary. With Alabama's tumble from the top of the polls at the hands of Texas A&M, margins of victory and "style points" could not be less relevant to Kansas State's fate: The Wildcats are rolling, they're relatively healthy, a with two more wins over Baylor (in Waco) and Texas (in Manhattan), they're on their way to the BCS title game. Nothing much to add. 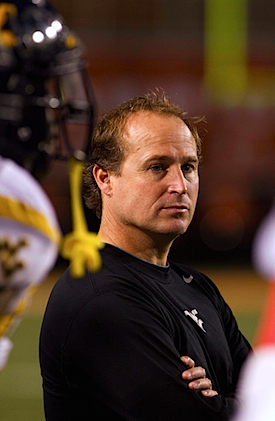 If you're keeping track at home, this makes four consecutive losses for the Mountaineers since they rose to No. 5 in the polls in early October, this one coming at the hands of Oklahoma State's third different starting quarterback of the season, Clint Chelf, who bombed WVU's beleaguered secondary for 292 yards and four touchdowns – actually one of the best performances against the pass by West Virginia's defense all season, all things considered.

How far has Geno Smith fallen from his brief reign as the undisputed winner of the September Heisman? Saturday was his first game over 300 yards passing since the 656-yard, 8-touchdown bomb he dropped on Baylor on Sept. 29, which still accounts for a full 20 percent of his total yards for the season and more than 25 percent of his touchdown passes. Then again, when the defense is giving up 51 points per game in conference games, there's only so much one can do.

5. Texas 33, Iowa State 7
Texas outgained Iowa State in this game by 332 yards – 609 to 277 – which is all I need to see to proclaim the Longhorns back to their surging September form after a borderline collapse in October. Seriously, this team looks it hit the 'Refresh' button at Halloween: You only have to go back three weeks to find a defense buckling under the strain of injuries and facing the up-tempo spread passing attacks of West Virginia, Oklahoma and Baylor, and just two weeks to find quarterback David Ash watching from the bench as backup Case McCoy led a fourth quarter comeback at Kansas. At that point, UT was beat up, unranked and hemorrhaging points, having just given up 178 in its previous four games alone. Both Mack Brown and defensive coordinator Manny Diaz were in the crosshairs.

It's amazing how reassuring a couple of comfortable conference wins can be. Ash, in particular, has hit his stride since the debacle at Kansas, lighting up Texas Tech and Iowa State the last two weeks for five touchdowns, zero picks and well over 17 yards per completion; his pass efficiency rating came in above 200 in both games. Freshman tailback Johnathan Gray scored twice against the Cyclones and has gone over 100 yards on the ground in two of the last three games; junior Mike Davis has gone over 100 yards receiving in three of the last four. The secondary seems to be finding its footing. A bye next weekend is a chance to get a few more guys healthy before TCU limps in on Thanksgiving.

Get past the Frogs, and Texas is serious spoiler bait at Kansas State on the final Saturday of the season – quite possibly with a BCS game at stake. Whether you're going back a month or a year, that's a step forward.