Texas A&M 29, Alabama 24.
- - -
1. This will not be the first time I've pointed this out, and given the future Johnny Manziel appears to have at Texas A&M, I doubt it's going to be the last. But of the many footnotes accompanying Manziel's emergence as one of a very small handful of must-watch players in college football, begin with the fact that almost no one watching the Aggies' spring practices expected him to be the starting quarterback. No, by all accounts at the time, that job was Jameill Showers' to lose. It was Showers, the reports said, who possessed the strongest arm and the most poise. Manziel? Talented kid, sure, good athlete, but much too green. Too erratic on the field and off. Didn't separate himself from the pack.

Maybe I read too much of that, or into his thoroughly middling recruiting rankings out of high school, or into that preseason arrest. Because despite the considerable evidence to the contrary over the first two-thirds of the season, my general impression of Manziel before today cast him as more or less the second coming of Taylor Martinez, another slippery, exciting "athlete" type who emerged from a quarterback competition he wasn't supposed to win, broke nationally with a handful of outrageous games as a redshirt freshman, then hit a wall in November and gradually settled into a reliable pattern of good-not-great for the rest of his career. (See also: Jacory Harris and Denard Robinson.) For Martinez, the bandwagon began to sputter, ironically enough, in a costly loss to Texas A&M in late 2010. For Manziel hit the wall came three weeks ago in a three-interception meltdown against LSU.

The Tigers made him look ordinary, on his own field. The Crimson Tide would make him look much worse. 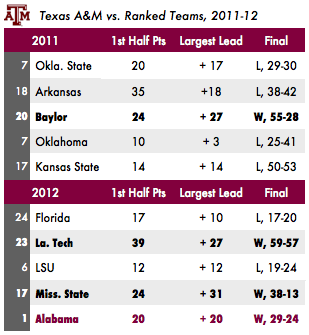 2. Given that set of assumptions, the language strains to accommodate the superlatives due Manziel and his young coaches for their confidence, execution and – yes, here it comes – poise in the face of the best defense in the sport, in arguably the most hostile environment in the sport. The Aggies roared out of the gate, didn't turn the ball over and never trailed against a team that, prior to its dramatic, season-saving, fourth quarter comeback at LSU, had trailed for a grand total of twelve seconds all year. Effectively borrowing a page from Utah's book in the 2009 Sugar Bowl, A&M stunned Bama for three quick touchdowns on its first three possessions of the game, and Bama spent the rest o the afternoon attempting to slug its way out of a very unfamiliar corner. The Aggies put up more points in the first quarter (20) than the Tide had allowed to any opposing offense in an entire game since the infamous Cam Newton Iron Bowl two years ago.

And it's not even the initial punch that deserves the most rousing hosannas, if only because it's so familiar, and so synonymous with Texas A&M's persistent . The Aggies always have a strong initial punch: Since the start of last season (2011), A&M has led by double digits at some point in seven of its eight losses, including a 17-7 edge over Florida in the season opener and a 12-0 run against LSU. In those games, A&M scored on its first three offensive possessions against the Gators, its first two against LSU, and subsequently fell head-first into a well for the rest of the game.

What really put the Aggies over the top was their all-too-rare counter-punch in the fourth quarter, particularly on a two-play, 66-yard "drive" following a critical fumble by last week's hero, T.J. Yeldon, that hit like a left hook that sends the champ staggering backward into the ropes. On top of everything else he's done all season, it was on those two throws, specifically, that Manziel graduate from up-and-coming dervish to elite bomber. The first: A 42-yard drop in the bucket to Ryan Swope on a well-covered wheel route into Alabama territory. The second, one play later: A 24-yard strike to Malcome Kennedy on a well-covered corner route that instantly ranks among the biggest plays in A&M history:

Both calls were aggressive, go-for-broke gambles in a situation that would have demanded reflexive conservatism from literally every other offense in America, and both throws were perfectly placed strikes that Alabama was helpless to do anything about in spite of the coverage. There is no defense for a perfect throw, and Manziel is beginning to make them look routine.

3. His counterpart, A.J. McCarron, was unexpectedly outplayed for the second week in a row – even more glaringly this time than in Baton Rouge – and like last week did everything in his power to bury that fact beneath the shower of Rammer Jammers and laurel leaves that would have followed another dramatic, season-saving comeback. He even got the obligatory Big Break on the desperate drive following Manziel's touchdown pass to Kennedy, when an apparent interception by A&M's Deshazor Everett was ruled incomplete because Everett's left heel landed out of bounds. Two plays later, McCarron hit Amari Cooper on a 54-yard bomb that pulled Bama within five and set the stage for another thrilling episode of A.J. McCarron's So You Think You Can Rally? 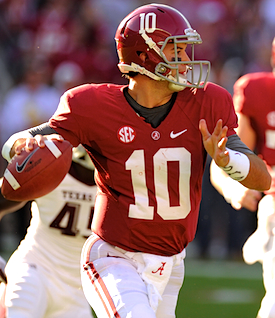 Instead, McCarron will wake up Sunday on the opposite side of last week's emotional triumph on the biggest stage of the season, this time as the guy who couldn't cover the last two yards on Alabama's final possession, whose last throw – his second interception of the day, and the season – plunged a dagger into the same championship ambitions he'd rescued from the tracks a few days before. The salt-of-the-earth persona of pretty much every Crimson Tide outfit ever tends to keep the quarterback out of the spotlight, including McCarron himself during last year's championship run, but A.J. is turning out to be an unusually appropriate face for this team: Steady as a matter of course, understated when he can afford to be, resilient when he has to be, perfect until he's not.

4. Of course, if the stumble at LSU was a harbinger of the fall, the proof is on the other side of the ball, where the Tigers finally dented Alabama's irresistible force of a defense. In Baton Rouge, LSU rushed for more yards (139), turned in the highest pass efficiency rating (147.7), averaged more yards per play (5.1), earned more first downs (22), converted a higher percentage of third downs (50), and scored more points (17) against Alabama than any FBS offense in the last two years; in Tuscaloosa, Texas A&M exceeded all of the above, converting 11 of 18 third downs with 165 yards rushing, 23 first downs and an efficiency rating of 167.3, all on 5.4 yards per play. And, while falling well short of LSU's amazing 19-minute advantage in time of possession, the Aggies also succeeded in visibly gassing the vaunted Bama D over the course of 77 snaps.

Finally, faced for the first time with two offenses that will likely be sending their quarterbacks and a handful of offensive linemen on to the NFL, the Tide have looked like a team breaking in six new starters on defense in place of departed draft picks. If McCarron is the face of this team, the defense is the body, and it is exhausted.

5. All that said, I think Nick Saban is absolutely right about the opportunities still in front of this team, including the BCS championship:

"Two of the three national championship teams that I coached lost a game," Tide coach Nick Saban said, counting one at LSU. "This team still has an opportunity to win the West and go to the SEC Championship Game and win a championship. There's still a lot for this team to play for."

At this point last year, still sporting a fresh wound from its overtime loss to LSU, Alabama ranked behind both LSU and Oklahoma State in the BCS standings, and was on the verge of being jumped by one-loss Oregon and/or Oklahoma if the Ducks or Sooners won out and claimed their respective conference championships – an avenue closed to the Crimson Tide. By the end of the month, Oklahoma State, Oregon and Oklahoma had all been felled by double-digit underdogs (all on the same weekend, in fact), and Alabama was back in the driver's seat at No. 2. And we've seen the BCS standings take even stranger turns than that.

There will be much more to say about the Tide's chances of climbing back into the championship picture after the BCS standings are released on Sunday night. Obviously, they need some help from the remaining opponents of Kansas State, Oregon and Notre Dame. But unlike last year's team, the 2012 Tide also have a chance to help themselves in the SEC Championship Game, where they'll get the East champ, Georgia, in what could conceivably amount to a play-in for the BCS Championship Game. For the moment, the question is out of Alabama's hands, in favor of the teams that can still claim perfection. But we don't have to look far to understand, at this time of year, just how fleeting those moments can be.