1. Missouri 51, Tennessee 48 (4OT)
We went through this last week, when they narrowly escaped an upset bid from Troy, so there's no need to go on again about how terrible the Volunteers are on defense – in fact, excluding the 23 points it tacked on over the course of four overtimes, Missouri is the first of six SEC opponents this year to come up short of 30 against Tennessee. So maybe there's some pride in the fact that the Tigers needed so much extra time to make the final tally look as ugly as usual.

The only really important number here is six: When Andrew Baggett's game-winning field goal crossed the bar on the final play of the fourth extra session, Tennessee fell to 0-6 in SEC play, 1-13 over the last two years, and Derek Dooley's only remaining lifelines – a bowl game, a winning season – drifted a little further away. Even under the most optimistic circumstances, Dooley only has two chances left to avoid being swept out to sea: First, at Vanderbilt next weekend, where the Vols will be underdogs for the second year in a row. If they survive the Commodores (and that is one big, depressing if), the question comes down to a visit from hapless, coach-less Kentucky. If not, the finale may as well be renamed the "Lame Duck Bowl."

2. Florida 27, Louisiana-Lafayette 20 I think I may be becoming a little obsessed over the chasm between Florida's outstanding resumé and the persistent awfulness of Florida's offense. The totally batshit ending here doesn't even interest me as much as the Gators' total lack of viable playmakers in the passing game. 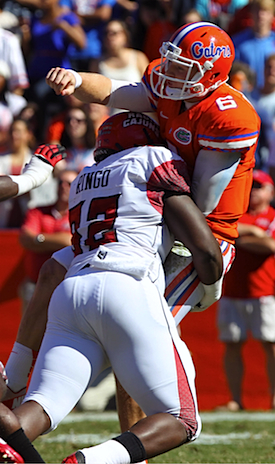 I mean, shouldn't any self-respecting Florida outfit ranked in the top ten be trouncing some random Sun Belt outfit by three or four touchdowns, minimum? Yeah, I know, they got caught napping today against a gimme opponent and let it get a little out of hand, just like Notre Dame last week in its harrowing, come-from-behind escape against Pittsburgh, and the offense has had more than enough in the tank to beat the likes of Texas A&M, LSU and South Carolina, even when it's been kind of terrible in the process. In eleven full possessions, Florida punted eight times and crossed midfield just twice. The starting quarterback, Jeff Driskel, was 13-of-16 passing… for 98 yards, or a little over 7.5 per completion. Five of those 13 completions went for five yards or less; only one went for more than 11 yards. Against LSU, okay. What's the excuse against UL-Lafayette? I'm assuming scoring the winning touchdown on a blocked punt with two seconds left wasn't in the script.

At least the offense as a whole managed to crack 300 yards for the first time in almost a month, even if it took until the final series of the game to do it. But I get the feeling the collision with Florida State in two weeks is going to make last year's game – the ugliest, most hapless offensive game of the season – look like a vintage, Spurrier-era shootout.

3. Syracuse 45, Louisville 26
The untimely death of an undefeated season in November is automatic news, especially when it comes in such efficient, lopsided fashion. (Offensively, Syracuse was 14-for-19 on third down, went well over 500 yards of total offense and scored on seven of ten possessions.) But in tangible terms – as far as it concerns the Big East race, the BCS standings or anything else outside of the now-former goose egg on Louisville's record – the story is really how little has changed: If the status quo holds, the Cardinals' winner-take-all trip to Rutgers on Nov. 29 is still winner-take-all, with the winner claiming the conference championship and an automatic BCS bid, and the loser headed for one of several bowls recently renamed after a retail clothing enterprise. That was the case at kickoff, and that's the case at the final gun. I don't think I'm trampling on any deflated fantasies of Louisville playing for the national championship here.

Of course, the Cardinals will fall out of the top ten in the polls after climbing to their highest position since 2006, and face a reduced margin of error if they're upset next week by UConn, which really would turn the race on its ear. But the polls are irrelevant if Louisville takes cares of its business in its last two games, which remains entirely up to Louisville. 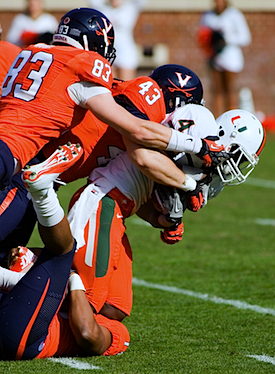 Here's the basic gist of the situation in the ACC's Coastal Division: Miami began the day in sole possession of first place, blew a ten-point lead in the final six minutes of the fourth quarter to the team that began the day in last place, and still controls its own destiny in the division despite bearing three conference losses. Obviously, the concept of "margin of error" has a slightly different meaning in these parts.

The key difference now being that Georgia Tech – that's right, Georgia Tech, the same Georgia Tech that fired its defensive coordinator at midseason in the midst of a three-game losing streak – is right in the mix courtesy of its triumph in the highest-scoring game in ACC history. Given their head-to-head loss to Miami in September, the Yellow Jackets' path to Charlotte still requires two specific turns over the next two weeks, only one of which is actually in their control: 1) The Jackets have to close out the ACC schedule by beating Duke next Saturday in Atlanta, bringing their conference record to 5-3, and 2) They have to cross their fingers that Duke responds the following weekend by upsetting Miami in Durham, leaving both the Canes and Blue Devils looking up at Tech with four conference losses apiece. If both of those things happen, the NCAA should add an extra year to The U's probation just for gacking it.

5. Wisconsin 62, Indiana 14
Wisconsin rushed for 564 yards in this game, most in school history, most by any FBS offense this season and third-most in Big Ten history. It was a merciless, start-to-finish rout, and I only mention it at all as an example for the milquetoast frontrunners of the ACC Coastal: When a division title falls into your lap, this is how you close. Take notes.