•CHASE THOMAS and TRENT MURPHY, OLBs, Stanford
Abandon hope, all ye who confront the Cardinal front seven: Over the course of its ongoing, three-game winning streak, Stanford has actually held Cal, Washington State and Colorado to negative yardage on the ground, emerging in the process as the national leader in rushing defense, tackles for loss and sacks. (Remember, this the same group that, including sacks, held USC to 26 yards on 27 carries back in September.) First among equals in the 3-4 scheme are the outside linebackers, Thomas and Murphy, the resident leaders in tackles and tackles for loss, respectively, who have also picked up some of the offense's slack by scoring the team's only two touchdowns in its two losses to Washington and Notre Dame – games in which the offense failed to find the end zone.

Oregon State hasn't made much pretense of being a run-first attack: The Beavers prefer to get the ball downfield to their outside receivers, Brandin Cooks and Markus Wheaton, who are averaging more than 16 yards per catch with a dozen touchdowns between them and represent a nightmare matchup for any secondary in the conference. Facing the same dynamic against USC, Stanford's best defense against the Trojans' dual deep threats, Marqise Lee and Robert Woods, was a pass rush that buried Matt Barkley and his Heisman hopes beneath six sacks and a steady diet of pressure that resulted in three turnovers and a second-half shutout. Cody Vaz is no Matt Barkley, but if OSU can't establish some semblance of a ground game early on, he may wind up feeling like him. 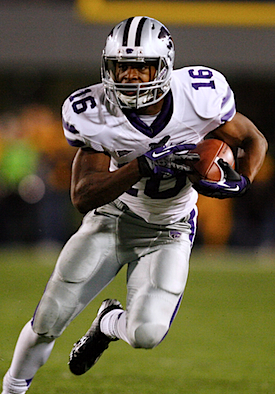 Kansas State has been completely, predictably opaque about the status of its star quarterback, Collin Klein, which is no arbitrary plot point at TCU or in the BCS standings: Klein is the efficient engine of the K-State offense, which could very well sputter to a very inopportune halt if he's not in the huddle. With or without Klein, though, the Wildcats' big-play punch is supplied by the diminutive Lockett, who suddenly looks like a reliable threat in the passing game on top of his more familiar role as the Big 12's most lethal return man. His 100-yard return last week against Oklahoma State broke a close game wide open, a quick-strike element the Wildcats will badly need in Fort Worth if Klein's not available to grind out extended drives.

•PATRICK LEWIS, C, Texas A&M
Lewis is overshadowed even on his own line by the Aggies' prototype tackles, Luke Joeckel and Jake Matthews, both of whom are bound sooner or later for the first or second round of the draft. But Lewis is the steady, veteran hand in the middle, heading into his 44th career start today at Alabama, where he'll have the assignment of taking on the immovable object in the middle of the Crimson Tide's irresistible force of a defense, nose tackle Jesse Williams, whose only job is to make the line of scrimmage a chaotic, impassable mass for A&M backs. If the Aggies can't run between the tackles, Bama can keep them in third-and-long situations and key on freshman sensation Johnny Manziel, in the first really hostile road trip of his career. The less room between the tackles, the less room for Manziel to be Manziel.

•WILL SUTTON, DE, Arizona State
It's already well established that opposing defenses cannot actually cover USC's receivers, especially Marqise Lee, who's spent so much time running through the secondary that he might just go ahead and line up there himself this afternoon. But opposing pass rushers have been able to get to Matt Barkley (see above), and no pass rusher in the Pac-12 has been better than Sutton, owner of 8.5 sacks in essentially seven games. That includes a takedown last week at Oregon State, Sutton's first game back from a knee injury he suffered in ASU's blowout loss at the hands of Oregon, and the Devils definitely need him back at full speed to prevent a repeat at the hands of the Trojans.