Around the Scorn: Beamer Ball hits the wall

Virginia Tech has become the exact opposite of its platonic self, Pitt stands by its men and a USC All-American reveals his alter ego, all in today's roundup

Share All sharing options for: Around the Scorn: Beamer Ball hits the wall

• THIS IS NOT HOW I RAISED YOU. Virginia Tech has been doing the "Beamer Ball" thing for a couple decades now, with such alarmingly consistent, career-making results that Frank Beamer co-opted the term for his own purposes on his personal website, and of all the teams he's drilled in the art of grit and opportunism the 2012 edition has to be the worst at it. In the first quarter alone of Thursday night's 30-12 loss at Miami, the Hokies blew a scoring opportunity by turning the ball over inside t,he Miami red zone, then fell behind 14-3 after a) Getting a punt blocked and b) Allowing an 81-yard kickoff return, both in a span of about six minutes. The Hurricanes quickly turned both chances into short-field touchdowns, and Virginia Tech spent the rest of the night lumbering around like an animal with its leg caught in a trap. Kicker Cody Journell also missed a field goal and an extra point. 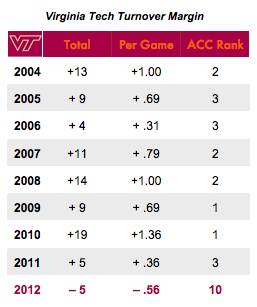 If only the deterioration of the special teams was the most glaring issue: With three more turnovers (to Miami's zero), the usually miserly offense has now given the ball away at least twice in all five Hokie losses this season, and remains on track to finish in the red in turnover margin for the first time since Virginia Tech joined the ACC in 2004. Two of those three giveaways from the arm of quarterback Logan Thomas, who has been picked off more times this season (12) than all but one other quarterback in the country – not a surprise, perhaps, when he's the only thing the offense has going for it. The Hokies finished with 421 yards of total offense, but if not for Thomas' ridiculous, 73-yard gallop in the second quarter, the Hokies would not have reached the end zone at all.

According to the usual script, this is supposed to be the point in the season when Tech finds a second wind and begins to pull away from the rest of the pack in the ACC, half of which is running in circles in the middle of the course and the other half of which has quit the race to make tip-off. Going into Thursday night, the Hokies' record in November stood at 27-2 since '04, with every goal larger goal – the ACC title, a BCS game – still tentatively intact in the muddled Coastal Division standings. Coming out, every assumption about Tech as a reliable, salt-of-the-earth frontrunner is pretty much shattered: At 4-5, the Hokies will fall short of ten wins for the first time since 2003, their last season in the Big East, and almost certainly will watch someone else take their reserved seat in the ACC Championship Game. (Right now, that's looking like Miami, believe it or not.) In fact, with Florida State on deck next Thursday night, the conversation now shifts from whether it's still possible for Tech to come out on top of the Coastal standings to whether it can still eke out seven wins to keep its streak of 19 consecutive winning seasons alive.

• THE RAP SHEET. Here's a headline you don't want to read the day before your toughest game of the season: Pitt's leading rusher and leading receiver have both been charged with assault.

Three University of Pittsburgh football players were charged with assault and conspiracy Thursday night after police said they surrounded a man in Oakland last month and one of them punched him in the head.

Running back Ray Graham, 22, of Elizabeth, N.J., wide receiver Devin Street, 21, of Bethlehem, Pa., and defensive back Lafayette Pitts, 20, of East Pittsburgh, were not arrested but will receive summonses by mail telling them to report to court Jan. 9 for a preliminary hearing.

Pittsburgh police wrote in a criminal complaint that they were working an overtime detail early on Oct. 21 when they tried to disperse a crowd from the intersection of Oakland Avenue and Bates Street and three people remained in the roadway.

One those people, Karl Olsheski, told police he had just been assaulted. He refused medical treatment and said he did not want to file a report, he just wanted officers to stop the man who had punched him, according to the criminal complaint.

According to Olsheski's account in the report, he was walking with two women when he was stopped by Graham, then surrounded by Street and Pitts when they tried to walk away. Street allegedly threw the punch.

Note that none of the players has been arrested. For its part, the university has issued a statement acknowledging the police report, but also emphasizing that all three players have denied involvement and have not had any communication with police. ("[W]e will not, and hope others will not, rush to judgment on these misdemeanor allegations.") In lieu of any other official action, all three are expected to play Saturday at Notre Dame.

• SOMEDAY MY MARVE WILL COME. After three years and countless injuries at Purdue, senior quarterback Robert Marve is finally set to make his first Big Ten start Saturday against Penn State. How long has Robert Marve been around? Bruce Feldman offers some perspective by chronicling the coaches who originally recruited him back in 2006 and 2007:

Of the 10 programs that had offered Robert Marve by that time [May 2006] -- Eastern Michigan; Florida International; Miami (Ohio); Middle Tennessee, Mississippi State; Buffalo; Connecticut; Kansas; South Florida and Southern Miss -- only one (MTSU) has the same head coach (Rick Stockstill). Miami of Ohio, Southern Miss and Kansas have all actually replaced the guy who replaced the guy on that sheet. In addition, all 10 of the assistants listed as handling Marve's recruitment are no longer at those schools. (The MTSU recruiter, G.A. Mangus, now coaches for Steve Spurrier at South Carolina.)

Of the 38 recruiters from this group, only two are still at the same program: Phil Parker at Iowa and Matt MacPherson at Northwestern.

They don't let anybody know this, but for every Christmas that they still have jobs, the staffs at Iowa and Northwestern crack the champagne like the 1972 Dolphins.

• SHOULDN'T YOU BE MORE MILD-MANNERED? – EVERY PAC-12 RECEIVER. Quite a few notable athletes did some very bizarre things on Halloween – Collin Klein saw you, Johnny Manziel, and he did not approve – but none of them did anything quite as gleefully weird as USC safety T.J. McDonald as the "Ghetto Flash":

Have your fun now, T.J., because beginning next spring it will be against your contract. (Also: Hat tip to unidentified teammate at the end of that video doing the best Valley Girl ever.)

QUICKLY…
• Incredibly, there is still a scenario under which Indiana can play for the Big Ten championship.
• Locals wonder whether Nick Saban will ever be inducted into the LSU Hall of Fame.
• BON delves into the tortured psyche of Mack Brown.
• Gary Patterson could tell before kickoff that TCU was "not fired up" to play Oklahoma State last weekend, although the Frogs initially led 14-0 before yielding 36 unanswered points in the loss.
• Mike Leach reminisces about the local color on road trips to Kansas State.
• Northern Illinois launches a Heisman campaign for its starting quarterback, which should at least result in a few more people becoming aware of his existence.
• Robert Nkemdiche's mom has a lot to say, and says all of it in this interview with the Atlanta Journal-Constitution.
• Goldie Gopher, u look good bb!
• This block, man.
• Gary Danielson explains why he thinks the BCS Championship should reward teams that win their conference championship over those that don't. (Seriously.)
• And here's a pro tip for aspiring journalists, courtesy of the Montgomery Advertiser: Always leave the reader wanting more.