AROUND THE SCORN: What Al Groh has here is a failure to communicate

Duke makes its move, Charlie Weis devotes the rest of 2012 to 2013 and Al Groh is maybe a little too smart, all in today's roundup.

Share All sharing options for: AROUND THE SCORN: What Al Groh has here is a failure to communicate

• YOU CAN CALL ME "FIRED." Look, we all know Al Groh is a smart man. Nobody's saying he isn't smart. At one point during Georgia Tech's opening night loss at Virginia Tech, the broadcast team marveled at the minutiae of a scheme that, according to their conversation with Groh, takes most players three years to truly grasp. Everyone around here recognizes the guy has forgotten more football than most of us will ever know. Works like a maniac, too.

But as a coach, maybe he has a little trouble, I don't know… communicating sometimes? Maybe he should take a little time off to work on that:

Al Groh will receive an unwanted respite from his 100-hour work weeks and his intricate game plans. After a 32-game term, the Georgia Tech defensive coordinator was relieved of his duties Monday.

In coach Paul Johnson's analysis, Groh did not fall short in his effort or smarts.

"What's inside his head, he's very knowledgeable," Johnson said. "There's no questioning that. The problem was becoming, what's in there, we weren't seeing on the field." 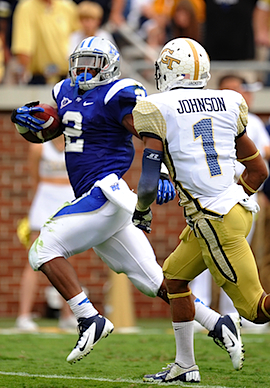 Oh, so suddenly it's Al Groh's fault that a handful of unmotivated teenage pituitary cases can't grasp the accumulated wisdom of a lifetime devoted to a craft? He's the one who has to shoulder the blame for the blown assignments, missed tackles and appalling statistics that have resulted in a three-game losing streak to Miami, Middle Tennessee and Clemson? For an unprecedented slump that's yielded 40 points in three consecutive games for the first time in school history? Is there no one willing to intervene on behalf of true strategic genius?

Yea, these many decades on, is there no one yet willing to supplicate his revolutionary vision with the tools and canvas upon which to finally wrench society from its complacent stupor?*

• DON'T FREAK OUT. Oh by the way, Duke just walloped Virginia by 25 points for its fourth consecutive win, no big deal. Outside of a blowout loss at Stanford on Sept. 8, the Blue Devils have scored at least 34 points in every game this season, still control their own destiny in the ACC's Coastal Division and need just one more win to clinch their first .500 record/bowl game since 1994. In this league, that's a lock, right?

Well, maybe. The last time Duke was in this position was just three years ago, in 2009, when a Halloween upset over Virginia left the Devils sitting at 5-3 overall with an entire month left to break the streak. From there, they proceeded to lose each of their last four in November by double digits. This time, they only need one win in their last six, over Virginia Tech, North Carolina, Florida State, Clemson, Georgia Tech or Miami. Duke's record since 1994 against those schools? Seven wins and 88 losses.

• IT'S A PLAN. Kansas is 1-4 after Saturday's 56-16 beatdown at Kansas State, and Charlie Weis is dropping any pretense that the Jayhawks have anything left to play for in 2012, except 2013:

LAWRENCE — One day after suffering another beating at the hands of a rival, KU coach Charlie Weis used Sunday to continue to build toward the future. And in this case, Weis specifically had next year in mind.

"I took everyone that's gonna be on the team next year and they practiced," Weis said on Sunday night. "And anyone who's not gonna be on the team next year, after we were done with their film session, they ran and lifted."
[…]
"You have to do two things here," Weis said. "You have to develop your current squad, but you also have to develop your future squad. What happens is, if you practice everyone who played all the reps in the game yesterday, then you’re never developing anyone else at the same time." 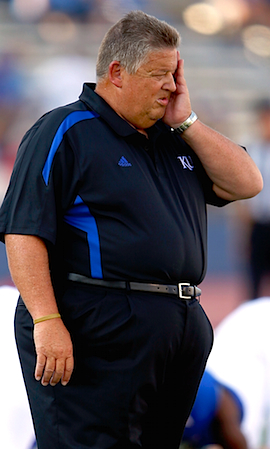 On one hand, this is not an exemplary demonstration of unity, loyalty, trust, work ethic, can-do spirit or any of the other bullshit that makes up most of a coach's official rhetoric. But if Weis is "giving up on the season," well, he ain't giving up much: Kansas has won exactly one conference game in its last 26 tries dating back to 2009 – we're going back to the Mark Mangino era here – and that one was a borderline miracle that got the opposing coach fired within 48 hours. It's obviously not getting any closer, either.

At best, the veterans might have a win or two in them in November, at best, if they happened to catch Baylor or Iowa State sleeping and got a couple of breaks. More realistically, Weis is choosing to lose by four touchdowns per game instead of three, with the promise of starting year two on slightly more solid footing with guys who have played a little. Can't blame a guy for trying.

• SEAN OF THE SCALPEL. Oregon State is 4-0 and ranked in the top ten for the first time in more than a decade, which means it's just about time to cue the season-killing disaster in 3… 2...:

Oregon State starting quarterback Sean Mannion injured his left knee Saturday against Washington State and will be out this weekend at BYU and for the foreseeable future, coach Mike Riley said after Monday's practice.

Mannion had an MRI and the plan is for him to have surgery soon. Riley wasn't specific about the damage and Mannion did not talk to reporters because he went to see a doctor. He did watch practice with a knee brace on and had a noticeable limp.

"We just found that out this morning," Riley said. "Sean is not going to play. He's going to have a surgery and will be out for an undetermined amount of time."

There's no specific indication that the injury had anything to do with Mannion's three interceptions Saturday – he played the entire game, attempting 42 passes – but considering he was only picked once in 127 attempts in the Beavers' back-to-back-to-back upsets over Wisconsin, UCLA and Arizona, it's a pretty good bet the knee skewed his performance against the most generous non-Colorado secondary in the league.

Not that there is ever a good time to turn an undefeated season over to a backup quarterback (in this case, junior Cody Vaz) who hasn't attempted a pass since picking up a little garbage-time work two years ago, but this weekend is particularly inopportune: Oregon State is at BYU, which hasn't allowed an offensive touchdown in three full games.

• GONE CASEY GONE? TCU coach Gary Patterson is expected to update the status of his starting quarterback today at a weekly luncheon, which takes on a little added weight after the Horned Frogs turned the ball over five times in Casey Pachall's absence Saturday in a sobering, 37-23 loss to Iowa State. Meanwhile, Pachall's former high school teammate, Texas safety Kenny Vaccaro suggests TCU fans probably shouldn't get their hopes up:

Vaccaro said he talked to Pachall Sunday and that Pachall told him that he was going to "take some time off and get everything together."

Vaccaro, a senior, was arrested in May outside an Austin nightclub and charged with failure to obey. He said he learned from the experience and expects Pachall to do the same.

"I told him after a couple of times of getting in trouble, 'You've got to stop. You're a quarterback. You represent your program. You represent yourself. You represent Brownwood.' And now it's just like, 'Man, you've got to make better decisions.' He's like, 'I know. I know,'" Vaccaro told reporters in Austin on Monday. "I think Casey can get it turned around because in high school, he was a different kid. I think he just got to the big city ... kind of like me. I haven't been perfect since I got here. But I think I've progressed and matured. I told Casey the same thing. So he's going to take some time off and get everything together. And he'll be fine, I think. He'll be fine in the long run. He's a great player."

Pressed for any further info on Pachall's fate, Vaccaro demurred: "I don't know. I can't tell y'all. I'll let TCU do it." Which kind of says it all.

Quickly… Just as it's getting Riley Nelson back from injury, BYU loses its backup quarterback for the rest of the year. … Arkansas will play the rest of the season without its leading tackler on defense. … J.W. Walsh is still the starting quarterback at Oklahoma State, for now. ... Micah Hyde is still listed as Iowa's starting cornerback despite a weekend arrest for public intoxication. … Iowa State officially embraces #farmageddon. … And with nowhere else to turn, Auburn fans lament their quarterback situation in song.

- - -
* If interested in a revolutionary vision for the 3-4 defense that will wrench society from its complacent stupor, a resumé is available upon request.