Like any good coach prepping for the biggest game of the season, Louisiana Tech boss Sonny Dykes swatted away the inevitable questions Monday about his team's postseason ambitions, insisting to reporters, "I do not even know how to spell BCS. That is like miles and miles away from our thoughts." Which may or may not be true for Dykes, personally, whose team has plenty to chew on Saturday as an eight-point underdog against Texas A&M. But rest assured that the Bulldogs' brethren in the WAC and the other "Have Not" leagues will be paying very close attention to their last, best hope of crashing the big-money party in January.

Of course, the money is more important than the party. Last year was the first since the BCS expanded to five games in 2006-07 that the five non-BCS conferences collectively failed to produce a team worthy of a slot. When Houston's perfect season went up in smoke in the Conference USA tittle game, so did an estimated payday in the neighborhood of $12.5 million from the BCS pie, which would have been divvied among all five conferences. The Cougars' failure to make the cut likely cost C-USA an additional $8 million.

If Louisiana Tech moves to 6-0 Saturday against a ranked, recognizable SEC power – with back-to-back road wins over Illinois and Virginia already on its resumé – then it will be on the fast track to a BCS game with only the remainder bin that is the WAC schedule left in its path. (For the record, that's Idaho, New Mexico State, UT-San Antonio, Texas State, Utah State and San Jose State. Utah State and San Jose State are the toughest of that group by far.) If A&M deals the Bulldogs their first loss, as expected, that's pretty much all she wrote for the Have Nots: The only other undefeated team outside of the major leagues is Ohio U. of Ohio in the MAC, which does not have nearly the non-conference juice that Louisiana Tech has – or will have, if it upsets the Aggies – despite the Bobcats' opening day triumph at Penn State. Even if "BCS" isn't in Dykes' vocabulary, presumably "GREEN" still is. 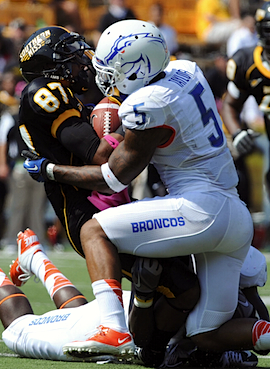 • This week's award for unintentional irony goes to first-year Southern Miss coach Ellis Johnson, who warned reporters, "Don't be fooled by the numbers," after his team outgained Boise State by 114 yards Saturday en route to its fifth consecutive defeat, a turnover-fueled, 40-14 rout for the Broncos. Here are a few numbers that tell the story quite accurately: Over the course of its 0-5 start, Southern Miss ranks 100th or worse nationally in total offense, scoring offense, scoring defense, passing offense, pass efficiency, pass efficiency defense and turnover margin, and is being outscored by 18.8 points per game.

Don't worry, coach: Nobody is fooled.

• Besides the Golden Eagles, only three other FBS teams are still in search of their first win: Eastern Michigan, UMass and Tulane, which still ranks dead last nationally in both total and scoring offense but actually demonstrated remarkable improvement Saturday by scoring a season-high 13 points in a 28-point loss to Louisiana-Lafayette. Unfortunately, none of the Futile Four are scheduled to play one another.

• Oh hey, remember when San Diego State coach Rocky Long hinted in the summer that he was considering going for it on fourth down on a more routine basis instead automatically sending on the punt team? Remember that?

After reading articles about an idiosyncratic Arkansas high school coach who never punts, always onside kicks, and has tremendous success doing it, Long is toying with the idea for his Aztecs of no punts or field goal attempts once they've driven inside an opponent's 50-yard line.
[…]
"It's a day-to-day theory," Long said with a grin late on Friday night. "I haven't decided because we're getting a feel for it out here. I just read about this guy, and I don't know if I can do that because everybody in the world is going to say this is not Football 101, right?

"But there's a reason why he's winning those games. Maybe he just has better players than everybody else; or maybe it's their team gets used to playing like that and the other teams don't get used to playing like that. It's fourth-and-seven — most defenses run off the field. And now they're going to stay out there. 'What? How come the punt team isn't coming out?'"

Yeah, forget that. Including a brief, unsuccessful experiment in their opening night loss to Washington, the Aztecs have attempted a grand total of eight fourth-down conversions in six games, the most average, unremarkable number possible. (They've punted three times as often.) Long himself refused to keep talking about it a month ago.

The team that is rolling the dice on fourth down? Penn State, which leads the nation in both attempts and successful conversions. Surprised? You shouldn't be, considering a) The Nittany Lions' glaring issues at kicker, and b) The previous experience of their new head coach. 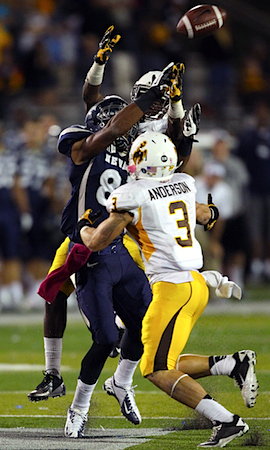 Wyoming landed in Reno as a 17-point underdog with three losses in its first four games, arguably the worst team in the Mountain West on the road against arguably the best, and proceeded to give the Wolf Pack all they could handle for three-and-a-half quarters – right up to the 8:20 mark of the fourth quarter, when Wyoming quarterback Brett Smith was abruptly booted from the game following his second personal foul penalty in a span of five minutes. Even Nevada beat writers thought the ejection was bogus, and the Cowboys wasted no time responding accordingly: Before Smith's exit, the Cowboys had scored three unanswered touchdowns to turn a 21-7 deficit in the second quarter into a 28-21 lead in the fourth. After, backup quarterback Jason Thompson was just 1-of-6 passing in relief, including three straight passes to end the game in overtime.

Bizarrely enough, Wyoming's rally had coincided with the exit of Nevada's starting QB, Cody Fajardo, who left in the second quarter with back spasms. In his place, backup Devin Combs struggled himself until the final possession of regulation, when he hit Richy Turner on a 44-yard bomb that sent the game to overtime. From there, Combs connected with Aaron Bradley on a 24-yard touchdown in the extra frame, and the defense broke the Cowboys' serve to fend off the upset. The biggest upset: The nation's leading rusher, Nevada tailback Stefphon Jefferson, was a nonentity against the worst run defense in the conference, finishing with a season-low 78 yards on just 3.4 per carry.

UPSET OF THE WEEK: Army 34, Boston College 31
One week after failing to score a touchdown in a 20-3 loss to Stony Brook – I repeat: Failing to score a touchdown against Stony Brook – the Black Knights rolled up 516 yards and four touchdowns rushing against the Eagles, possibly accelerating Frank Spaziani's demise in the process. Somehow, Army kept the ball on the ground for a staggering 79 of its 92 offensive snaps, sending three different rushers (Larry Dixon, Raymond Maples and Trent Steelman) well over 100 yards apiece, and still found room to drive for the game-winning touchdown in the final minute without running directly into eleven defenders in the box.

For the season, Army is averaging just shy of 70 carries per game, to just seven passes, the most run-oriented ratio in the I-A/FBS ranks since at least 2000, the last year in the NCAA's online database.

MID-MAJOR PLAYER OF THE WEEK: Phillip Thomas, S, Fresno State
Thomas did his best Honey Badger impression at Colorado State, racking up eight tackles, one sack and two takeaways (one interception, one forced fumble) in a 28-7 Fresno win. For the season, Thomas – a senior who missed all of 2011 with a broken leg – leads the nation with six picks in as many games, and has already been named the Mountain West's Defensive Player of the Week on two separate occasions.
- - -
Honorable Mention: Toledo receiver/return man Bernard Reedy racked up 239 all-purpose yards in the Rockets' 50-35 win over Central Michigan, including the first of Toledo's three non-offensive touchdowns on a 66-yard punt return. … Houston running back Charles Sims turned in 265 yards of total offense – 210 rushing, 55 receiving – and two touchdowns in the Cougars' 44-21 win over North Texas, his second consecutive game over 200 total yards. … And spectacularly named Western Michigan quarterback Tyler VanTubbergen completed 23 of 28 passes to eleven different receivers in the Broncos' 52-14 romp over UMass, five of them going for touchdowns.

A SOMEWHAT ARBITRARY MID-MAJOR TOP 10.
1. Louisiana Tech (5-0). Bulldogs have ripped off a run of 30 consecutive points in each of their last three games.
2. Ohio U. of Ohio (6-0). Bobcats have legitimately struggled the last two weeks to put away UMass and Buffalo.
3. Nevada (5-1). Unexpectedly close call against Wyoming is not a good omen for a clean run through the Mountain West.
4. Boise State (4-1). Broncos are still well behind the curve offensively, but at least they're learning to capitalize on their opponents' generosity.
5. BYU (4-2). Cougars haven't allowed an offensive touchdown in 13 consecutive quarters, and have still lost twice in that span.
6. San Jose State (4-1). Get by Utah State this weekend, and the Spartans have a clear path to nine wins. If they get to ten, it will be a new school record.
7. Louisiana-Monroe (3-2). OK, so actually it turns out Arkansas and Auburn are just really, really terrible.
8. Tulsa (5-1). Token Conference USA rep has won five in a row since an opening day loss to Iowa State, which ain't looking so bad at the moment.
9. Toledo (5-1). Rockets have also taken five straight since dropping their opener at Arizona in overtime.
10. Northern Illinois (5-1). Five-game winning streak here, too, on the heels a one-point loss to Iowa.
- - -
Honorable Mention: Central Florida, Fresno State, Louisiana-Lafayette, Utah State, Western Kentucky.