Box Scorin': Another victim vanishes in the Notre Dame void

The Fighting Irish drag the Hurricanes into their Bermuda Triangle for opposing offenses, and more of the weekend's weirdest, wildest and most prolific stats.

Share All sharing options for: Box Scorin': Another victim vanishes in the Notre Dame void

• Miami failed to score a touchdown in a 41-3 beatdown at the hands of Notre Dame, the third consecutive opponent the Fighting Irish have held out of the end zone entirely. The last touchdown of any variety against the Irish came on a 15-yard pass from Purdue quarterback Caleb TerBush to Antwan Edison in the fourth quarter of the Boilermakers' 20-17 loss in South Bend on Sept. 11, a span of twelve full quarters. Incredibly, that streak only ranks second nationally: With its claustrophobic, 6-3 win over Utah State on Friday, BYU hasn't allowed an offensive touchdown in 13 consecutive quarters.

Notre Dame and BYU will play on Oct. 20, by the way, in a game that should come down to the last offense with the ball, which will be hit for a decisive safety.

• On the other side of the ball, Notre Dame's 376 yards rushing were the most by an Irish offense since 2000, and its first time over 300 on the ground since November 2003. Two different ND backs, George Atkinson III and Cierre Wood, went over 100 yards apiece. 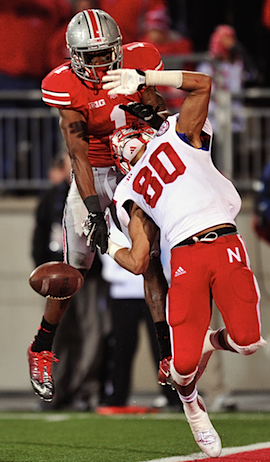 • While the offense stole the show, Ohio State defensive end John Simon racked up five tackles for loss, two sacks and a forced fumble in a 63-38 thrashing of Nebraska. In the secondary, cornerback Bradley Roby had two of the Buckeyes' three interceptions of Cornhusker quarterback Taylor Martinez, including a pick-six that kicked off the scoring in the first quarter.

• Finally healthy for the first time this season, North Carolina tailback Giovanni Bernard ripped off 262 yards rushing on 11.4 yards per carry against Virginia Tech, and accounted for more than half of the Tar Heels' 533 yards from scrimmage in a 48-34 UNC win.

• LSU linebacker Kevin Minter was credited with 20 tackles, two sacks and a forced fumble in the Tigers' 14-6 loss at Florida, all career highs. His 17 solo tackles against the Gators matches the best single-game total by any FBS player since 2005.

• N.C. State successfully converted three fourth downs on its 43-yard, game-winning drive to beat Florida State, including the clinching touchdown, a 4th-and-2 strike from Mike Glennon to Bryan Underwood with 29 seconds to play.

• One week after failing to score a touchdown in a 20-3 loss to Stony Brook, Army rolled up 516 yards and four touchdowns rushing en route to a 34-31 upset at Boston College. Altogether, the academy kept the ball on the ground for a staggering 79 of its 92 offensive snaps, sending three different Black Knights – Larry Dixon, Raymond Maples and Trent Steelman – well over 100 yards apiece.

• Arizona quarterback Matt Scott finished with 500 yards of total offense and new conference records for both passes (69) and completions (45) in the Wildcats' high-scoring, overtime loss at Stanford. As a team, 'Zona also set a new Pac-12 record with 103 plays from scrimmage.

• South Carolina quarterback Connor Shaw connected on just six of ten passes against Georgia, but averaged 27 yards per completion with two touchdowns in a resounding, 35-7 rout for the Gamecocks. Shaw's pass efficiency rating, 262.1, was the best against an SEC defense this season.

• In his first career start in place of suspended starter Casey Pachall, TCU quarterback Trevone Boykin was picked off three times in the Horned Frogs' 37-23 loss to Iowa State, snapping the nation's longest winning streak at 12 games. Including a pair of fumbles by fellow freshman B.J. Catalon – also seeing his first extended action as a result of injury and attrition in the backfield – the Frogs turned the ball over five times in all, leading to 17 Cyclone points. 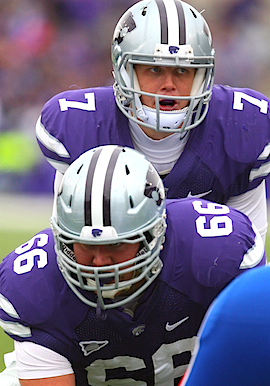 • After falling behind 14-7 against Kansas, Kansas State proceeded to score seven unanswered touchdowns on its next 29 offensive plays. K-State quarterback Collin Klein and tailback John Hubert combined for 217 yards rushing and six touchdowns on 10.9 yards per carry.

• Pittsburgh quarterback Tino Suneri passed for 319 yards on 33 attempts on Friday night, but somehow did not produce a touchdown or interception in the Panthers' 14-13 loss at Syracuse. One good reason for that: Syracuse defensive end Brandon Sharpe tied a season high nationally with four solo sacks.

• Southern Miss outgained Boise State by more than 100 yards' worth of total offense, 424 to 310, but was never competitive thanks to five turnovers – two interceptions, three fumbles – in a 40-14 rout. Four of the Golden Eagles' five giveaways led directly to Boise touchdowns.

• With four touchdown passes in West Virginia's 48-45 win at Texas, Mountaineer quarterback Geno Smith has 24 touchdowns for the season – six more than any other FBS passer – with zero interceptions in 204 attempts. Through five games, Smith's completion percentage (81.4) and efficiency rating (202.4) are both on pace to obliterate NCAA records.

• Six weeks into the season, six of the nation's seven most efficient passers hail from the Big 12: Geno Smith, J.W. Walsh, David Ash, Casey Pachall, Nick Florence and Collin Klein. The only non-Big 12 quarterback among the top seven? Alabama's A.J. McCarron, who ranks fifth nationally with a 177.1 rating thanks to 12 touchdown passes with zero picks.