The Seminoles have the talent and the resources to return to their former perch among the nation's elite, but still cannot find the consistency to survive routine road trips.

Share All sharing options for: Florida State keeps its annual appointment with an inexplicable road flop

N.C. State 17, Florida State 16
- - -
1. There is plenty to said about this game, specifically, beginning with the collapse of Florida State's allegedly resurrected offense in the second half, and N.C. State's simultaneous rally out of a 16-0 hole. But of course, because this is Florida State, there is so much more to it than that.

For example. Here are the results of the Seminoles' last nine games as a ranked team, on the road against an unranked underdog:

Add it up: Since 2005, Florida State is now 1-8 in its last nine games as a ranked team on the road against an unranked underdog. In two-and-a-half years under Jimbo Fisher, FSU has dropped four games it was favored to win by double digits, straight-up. Primitive farmers could set their harvests by it. As a society, we could use it to mark the annual transition from Savings Time to Standard Time.

2. And not to be all "Told ya so" – like everyone else, I picked Florida State to win this game without much thought to the possibility that it might not – but it's not like we didn't see this coming from more than four months away:

But there is a distinct aura of "fool me twice, shame on me" about a team that has yet to find a way to avoid the kind of random losses (see: Wake Forest and Virginia last year, N.C. State in North Carolina in 2010, South Florida and Boston College in 2009, Boston College and Georgia Tech in 2008, etc., etc.) that turn a potentially great year into a missed opportunity. If this is the team that finally turns the corner, it won't be because of infrastructure, talent or pedigree – there's never been a shortage of any of the above – but because of a much more elusive virtue, consistency, of which there's been virtually none for more than a decade. As always, Florida State is a blue-chip stock with plenty of early buyers waiting to cash in. And as always, the best advice is caveat emptor. 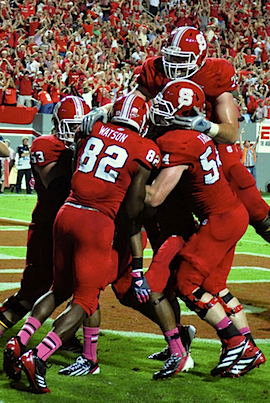 That's from June, after a certain preseason magazine kicked off the latest round of FSU hype by anointing the Seminoles No. 1, which is only a slight exaggeration to the annual FSU hype that has consistently cast the 'Noles as an ACC powerhouse since their last conference championship seven years ago. And even I was more or less convinced by the emergence of a vintage-looking offense in their 49-37 romp over Clemson, coming as it did on the heels of a reassuringly routine win over a familiar stumbling block, Wake Forest. Two weeks later, well, shame on me. Again.

As mentioned, the Seminoles' demise came amid an offensive meltdown in the second half, when they generated five punts and an interception on six full offensive possessions. (The seventh was a brief desperation drive with just 16 seconds on the clock following the game-winning touchdown pass from N.C. State's Mike Glennon to Bryan Underwood.) The nadir came on Florida State's last full possession, which began with 2:47 on the clock after the 'Nole defense – still clinging to a 16-10 lead – forced the Wolfpack to turn the ball over on downs at the FSU 32-yard line.

At that point, N.C. State still had all three of its timeouts to burn on defense, but a single first down by Florida State could have either ended the game outright or effectively ended it by leaving the Wolfpack with too little time to mount an actual drive. Instead, the Seminoles gained one yard on three consecutive runs, and exactly 20 seconds lapsed from the game clock before they were forced to punt it back to the Pack with plenty of time for a two-minute drill.

From there, N.C. State blocked the punt, Glennon connected on three successful fourth-down conversions en route to the end zone and the part was officially on.

4. No, seriously, the party was on, immediately:

Yeah, not my job, but I'm think you should probably just go ahead and let this one go, STAFF bro.

5. For the record, the FSU loss leaves sole possession of first place in the ACC Atlantic to… any guesses? That's right: Mighty Maryland, which moved to 1-0 in conference play Saturday with a come-from-behind, 19-14 win over Wake Forest. It probably goes without saying that the Seminoles can still fulfill all of their ambitions within the conference if they take care of business from here. Nationally, the ACC is destined again for another winter on the outside of the BCS championship picture looking in, for the 12th year in a row.