The final score has all the trappings of your standard, high-octane Big 12 shootout, but by Big 12 standards, the Mountaineers' upset at Texas was a borderline slugfest.

West Virginia 48, Texas 45
- - -
1. The final score has all the trappings of your standard, high-octane Big 12 shootout, and the numbers bear that out to an extent: There were eleven touchdown drives, six lead changes and well over 800 yards of total offense. There were only two punts. Geno Smith had four touchdown passes, Stedman Bailey had three touchdown catches, etc. Especially for the kinds of person who is predisposed to be dismissive of spread offenses, it would be easy to mistake this win on paper for the same genre of up-tempo, "Basketball On Grass" pinball as West Virginia's 70-63 win over Baylor. But in fact, the Mountaineers' upset in Austin falls into a different category altogether: By Big 12 standards, it was a borderline slugfest. 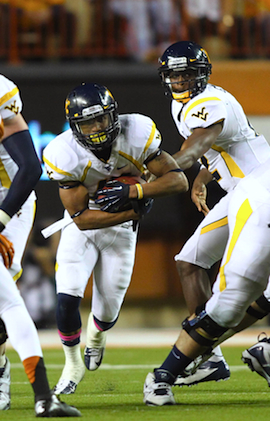 For starters, West Virginia's "Air Raid" philosophy yielded to the most lopsided run:pass ratio in favor of the former – 42 runs to 35 passes – since pass-happy head coach Dana Holgorsen installed his prolific, up-tempo system last year. Not that a season-low 269 yards through the air is about to dethrone Geno Smith from the top of the premature Heisman charts. (For the season, Smith now has 24 TD passes, ten of them going to Bailey, and still has not been picked off in 169 attempts.) But the star of the show was actually a running back, for a change: Sophomore Andrew Buie, who finished with career highs by far for total yards (274), rushing yards (208) and carries (31) in place of injured starter Shawne Alston, and scored twice. Before tonight, Buie had never cracked the 100-yard barrier on the ground, and wound up going well over 200 against a defense generally regarded as the best in the conference.

And for all the firepower in the passing game, the Mountaineers' finest moment may have been their final, door-slamming drive of the night – an 8-play, 76-yard march on which Smith put the ball in the air just once. Instead, clinging to a 41-38 lead, they turned to Buie, who carried seven times for 63 yards over the course of a little more than four minutes. Traditionally, fast-paced, pass-oriented spread teams struggle to keep the clock churning in those situations. But by the time Buie crossed the line on his second touchdown run of the night, Texas had just 1:18 remaining to make up a 10-point deficit.

2. Besides the notable absence of receivers running free behind the Longhorn secondary, Texas also delivered significant, sustained heat against Geno Smith for the first time this season: As a team, UT was credited with four sacks, seven QB hurries and two forced fumbles in the pass rush, both forced by defensive end Alex Okafor, both recovered by Texas deep in Mountaineer territory. (The first was pounced on at the goal line by Okafor's All-American counterpart, Jackson Jeffcoat, for a second quarter touchdown; the second was wasted when kicker Anthony Fera missed a crucial field goal attempt to tie in the fourth quarter, setting up West Virginia's decisive drive.) Again, though the 48 points suggests otherwise, WVU was consistently challenged for the vast majority of the game. 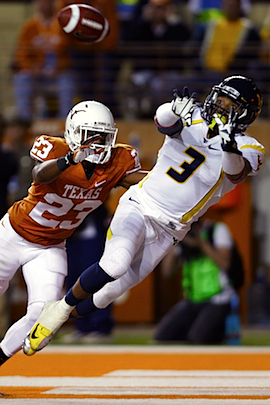 3. In fact, the ultimate difference over the course of the night may have been the Mountaineers' aggressive success when Texas corralled them into a decision on fourth down: They went for it five times, made it five times, and went on to score touchdowns after all five. On one occasion in the first quarter, they actually converted two fourth downs on the same possession, the second going for a 40-yard touchdown from Smith to Tavon Austin that would stand as West Virginia's longest play of the night. Failure to clear any of those hurdles may have been enough to swing the pendulum to Texas.

On the same point, though, the Longhorns didn't help themselves by finishing just 1-of-3 on fourth down, after converting 3-for-3 last week in their skin-of-the-teeth win at Oklahoma State. In this conference, wasted bullets are a luxury a contender cannot afford.

4. As validating as the victory in Stillwater was for a maturing outfit looking to put two disappointing seasons behind them, the sobering fact is that Texas has now dropped seven straight and nine of their last ten against ranked opponents since Colt McCoy was knocked out of the BCS title game back in January 2010. That ongoing fact doesn't necessarily eliminate the 'Horns from the Big 12 race with both Oklahoma and Kansas State still looming on the schedule – and on West Virginia's – but it does remind them just how far they still have left to go.

5. As expected, a couple of West Virginia fans with no apparent connection whatsoever to the University of Texas, the state of Texas, Austin, Royal Memorial Stadium or anything else even remotely related to this game went through with the rare – unprecedented? – tailgate wedding outside of the stadium. I mean, I guess this qualifies as a wedding?

Well, it's legal, anyway. Because what little girl hasn't grown up dreaming about spending the happiest day or her life in a parking lot 1,400 miles from home, foregoing the traditional dress for a t-shirt adorned with a Big 12 logo?