Full-grown Gators face down ghosts of Octobers past

After two years in the wilderness, Florida announces its return to the SEC's elite with a frighteningly familiar defensive romp.

Share All sharing options for: Full-grown Gators face down ghosts of Octobers past

Whatever they'd been in the hey day of the Meyer/Tebow era, and whatever the recruiting rankings still said about the talent level, those games were confirmation that the Gators no longer belonged among the SEC's upper crust. Today was confirmation, finally, that this edition does.

2. Aesthetically, of course, that's not saying much, considering "elite" in this conference continues to coincide with stuffing opposing offenses into a potato sack and throwing them off a bridge. After two years of getting pummeled into submission by Alabama and LSU, Florida didn't exactly come out floating like a butterfly on offense: Aside from the Gators' back-to-back touchdown drives in the third quarter, covering 85 and 77 yards, respectively, their other nine possessions resulted in seven punts and two fumbles. Quarterback Jeff Driskel finished with 61 yards passing, and the longest play of the day (a Driskel scramble) covered all of 17 yards. Tailback Mike Gillislee gets a gold star for churning out 146 yards – a Herculean effort against LSU – but it took him 34 carries to get there, on an average of just 4.3 per. 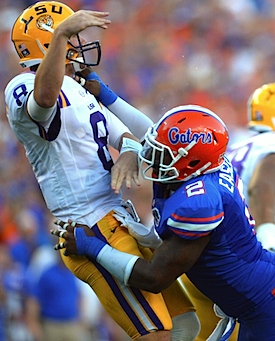 That kind of patience is not possible without the defense doing to the LSU offense essentially the same thing Alabama did to the LSU offense in its horrendously un-entertaining yet brutally effective turn in the BCS Championship Game. After marching 64 yards for a field goal on the first possession, the Tigers retreated into the same quivering, inept ball that put America into a coma back in January, as if a 3-0 lead was all it was going to take. Aside from an isolated, 56-yard completion from Zach Mettenberger to Odell Beckham, Jr. in the third quarter, the offense did not cross midfield again, and that play ended with Beckham turning the ball over on a fumble. LSU's only other score was the direct result of a Driskel fumble just before the half, with which the offense could do nothing before trotting on the field goal team. Including sacks, the vaunted running game churned out 42 yards on 1.7 per carry.

In other words, every nagging concern LSU fans had about the offense after the 12-10 flop against Auburn two weeks ago was magnified today, all the more so given that Auburn has turned out to be even worse than anyone thought. Ten months after the decisive beatdown in the Superdome, there are still no answers against those few defenses that can hold their own against the Tigers man-to-man.

3. On that note, those oft-mocked recruiting rankings are beginning to look pretty good. Eight of the eleven starters on Florida's defense – Dominique Easley, Sharrif Floyd, Neiron Ball, Jonathan Bostic, Michael Taylor, Joshua Evans, Jaylen Watkins and Matt Elam – arrived as four or five-star recruits in the massively hyped signing classes of 2009 and 2010, on the heels of a 26-2 run by Tebow and Co. over the preceding seasons. Of the other three (Omar Hunter, Lerentee McCray and Louchiez Purifoy), Hunter was pegged as a five-star prospect in 2008, and McCray and Purifoy were both highly regarded four-star types in '08 and 2011, respectively. And that's with the two most hyped recruits on the entire roster, linebacker Jelani Jenkins and defensive end Ronald Powell, both relegated to the bench with injuries.

It took a couple years, but surprise! This defense is every bit as gifted athletically as the overtly dominant, championship-level units we've seen the past two seasons at Alabama and LSU, and now that it's made up overwhelmingly of juniors and seniors, the results .

4. Matt Elam was all over the field for Florida's defense, hitting everything that moved, etc., which at one point happened to include fellow Gator Louchiez Purifoy:

Is it possible to draw a targeting penalty against your own teammate?

5. There's plenty of time over the next few days to talk about where the upset puts Florida in the national pecking order – given their back-to-back wins at Texas A&M and Tennessee in September, I'd say pretty, pretty damn high – but I think it's worth pointing out that the loss in an of itself doesn't automatically eliminate LSU from the conference or BCS pictures, either. The Tigers' next four games are against South Carolina, Texas A&M, Alabama and Mississippi State, all ranked teams boasting a combined record of 20-1. That's more than enough juice to overcome an eight-point loss to a very good team in early October, on the road, and possibly to earn a rematch with Florida in the SEC Championship Game. Every larger goal is still in front of them, if they're perfect the rest of the way.

Ask anyone who's gotten a glimpse of this offense today, though, or at any point over the last three weeks, and the odds of perfection should become abundantly clear. Maybe it comes back to the absence of the Honey Badger, or of their best offensive lineman, or the departure of last year's only reliable deep threat to the NFL, or a combination of all three. At any rate, the 2012 Tigers are very clearly not who we thought they were.