It's Official: Auburn, you're the SEC West's weak link

In a battle of the movable object vs. the resistible force, the Tigers' offensive numbers speaks for themselves.

Share All sharing options for: It's Official: Auburn, you're the SEC West's weak link

Arkansas 24, Auburn 7
- - -
1. For some context: Auburn came into the weekend ranked dead last in the SEC in passing offense, pass efficiency, total offense and (worst of all) scoring offense at just 17.5 points per game. In two SEC games against Mississippi State and LSU, the Tigers had managed just 20 total points and exactly one offensive touchdown, on a 26-yard "drive" following an LSU fumble. They ranked 116th nationally in turnover margin out of 120 teams.

In the red corner: Arkansas came into the weekend ranked dead last in the SEC in passing defense, pass efficiency defense, total defense and (worst of all) scoring defense at 40.6 points allowed per game. Over their last four games, the Razorbacks had yielded 34 points to Louisiana-Monroe, 52 to Alabama, 35 to Rutgers and 58 to Texas A&M en route to a soul-crushing, month-long losing streak. They ranked 120th in turnover margin out of 120 teams.

Imminently movable object, meet thoroughly resistible force. Something had to not give.

2. Obviously, then, the following information should be applied on an appropriate curve. On 13 offensive possessions against the worst defense in the SEC – the defense last seen being dismembered in a 58-10 bloodbath – Auburn's afternoon amounted to five punts, six turnovers, a missed field goal and (mercifully) one touchdown drive. Through five games, the Razorbacks had recorded a grand total of seven sacks; today, they had eight. Prior to today, they'd intercepted one pass; today, they picked off three. Two of them came on back-to-back possessions in the fourth quarter, both off of the backup quarterback, Clint Moseley, who was only in because of the ongoing impotence of starter Kiehl Frazier. 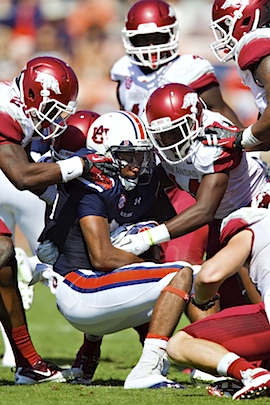 Including the sacks, Auburn finished with 40 yards rushing on 1.3 per carry. Out of seven opportunities in Arkansas territory, six resulted in zero points. The Tigers' lone touchdown came courtesy of a trick play. With seven offensive touchdowns for the season, they've put the ball in the end zone fewer times than any offense in the FBS except Tulane's.

3. The numbers by themselves speak more powerfully than hyperbole. But it is not an exaggeration at this point to imagine Gene Chizik being led to the swiftest axe ever to fall on a head coach after winning a national championship. It took five years for Miami to pull the plug on Larry Coker, and a decade for Phil Fulmer to wear out his welcome at Tennessee. Sans one of the most impressive physical specimens on the planet as his quarterback, Chizik's triumph over the initial skeptics may not last two years.

Not that that's breaking news or anything: Long prior to the Tigers' dreadful September, 2011 ended with lopsided beatdowns at the hands of Arkansas (38-14), LSU (45-10), Georgia (45-7) and Alabama (42-14) that spent all of the goodwill they'd earned during the 2010 title run, and then some. Auburn came in 100th nationally in total offense last year and next-to-last in the SEC in total defense, necessitating a purge; by the start of winter conditioning for 2012, not only were both coordinators making tracks for greener pastures, but so was the best player on the team.

Which leaves Chizik, in year four, presiding over a team that is wholly his own and appears to be much further behind the pack in the SEC than the program he inherited in December 2008, when his arrival from a 5-19 stint at Iowa State was greeted with equal parts confusion and anger. The next week will belong to the pitchforks, and if it's followed by a loss at Ole Miss next Saturday to drop to 1-5, the torches will be coming right after them.

4. We can confirm this evening that Arkansas linebacker Terrell Williams is alive, although it's impossible to say that he's well after this hit by Auburn's Joshua Holsey:

That's a true freshman absolutely clocking a senior, which doesn't make it any less cringe-worthy.

5. As a footnote, Arkansas tailback Knile Davis carries just three times for –4 yards in this game, yielding the majority of the work to Dennis Johnson (21 touches, 91 yards, 2 TDs). As much as anyone on a disappointing team, Davis has not been himself since returning from the ankle injury that cost him the entire 2011 season – in six games, he has just 273 yards on 3.3 per carry, with more fumbles than touchdowns – and rather than the All-SEC return to form the Razorbacks expected, he may be facing a permanent demotion.