The day's most pivotal players, personalities, match-ups and schemes of Week 6.

Share All sharing options for: Game Day Keys: Marcus Lattimore is still here, and more on Saturday's most essential players

•MARCUS LATTIMORE • RB, South Carolina.
Most of the hosannas over the first month of the season have been reserved for Georgia's prototypical freshmen, Todd Gurley and Keith Marshall, who are leading the SEC in every conceivable category on the ground – yards, yards per carry, touchdowns, big plays – and enjoying the inevitable hyperbole that comes with it. For sheer value, though, it's still true that no offense in America relies more on a single tailback than South Carolina relies on Lattimore, and South Carolina has never relied on its workhorse more than in its two wins over Georgia the past two seasons. As a freshman in his first SEC game in 2010, Lattimore touched the ball 38 times, broke 29 tackles and accounted for 56 percent of the Gamecocks' total yards in a 17-6 win. Last year in Athens, he scored twice en route to 184 yards, the majority of them coming with Carolina clinging to a narrow lead in the fourth quarter.

The difference between Lattimore in those games and Lattimore today is a major knee injury that, to most eyes, has cost him some of his previous explosiveness. The numbers necessarily bear that out: Through five games, he still ranks near the top of the conference with 120 total yards per game, despite limited touches in blowout wins over East Carolina and UAB and a concerted effort to reduce his workload overall. There will be no such restraint today, though, when Georgia's quietly vulnerable front seven will get 100 percent of whatever their old nemesis has left. 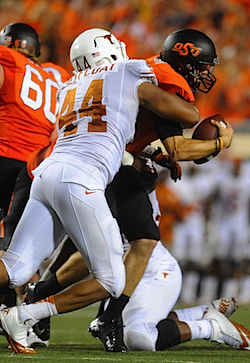 Texas coaches were sufficiently spooked by the defense in last week's skin-of-the-teeth, 41-36 escape from Oklahoma State that they began holding open auditions this week in search of a few new answers – most notably at safety – ahead of today's visit from West Virginia and the most prolific passer in college football. But if there is any Longhorn whose job is safe, it's the resident pass rush artist, who stood out in Stillwater with four tackles for loss, a sack and a forced fumble. Texas is known for mixing up its pressure looks against spread offenses, including a generous helping of blitzes. Still, if there is any hope of getting Geno Smith out of the rhythm that won him the prestigious September Heisman, Jeffcoat has to be at the front of the charge.

•CHAZ GREEN and XAVIER NIXON • OT, Florida.
Of course, there is no precedent for blocking LSU's front seven, which goes (at leasteight or nine deep in future draft picks and currently … . But the nearest equivalent Florida's offensive line has seen to date, at Texas A&M, sacked quarterback Jeff Driskel nine times back in week two, and a much less super-charged front from Kentucky got to Driskel three times in the Gators' last game. Nixon and Green are both tabbed as future pros, and Green has missed multiple games with a injury. If they can't hold up for four quarters against the Tigers' blue-chip rotation, Florida's upset bid is dead on arrival.

•KENNY STILLS • WR, Oklahoma.
Even five weeks into the season, in October, Texas Tech's ongoing status as the No. 1 total defense in the nation is still something of a punchline. Schedule aside, though, the Red Raider secondary has been borderline impenetrable, and Oklahoma has done almost nothing in its first three games to suggest it's the attack to restore the old, flammable order. If that's ever going to happen, the spark has to come from Stills, who – amid legions of unproven talent in the same huddle – remains the Sooners' most lethal deep threat and only reliable playmaker. Facing a potential spiral if the record falls to 2-2, OU badly needs him to prove it. 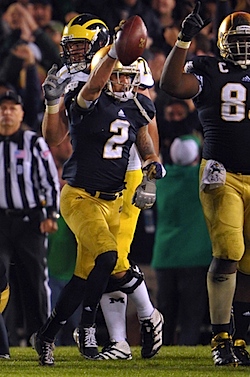 Cornerback was a glaring concern for Notre Dame even before starer Lo Wood went down with a preseason injury, but through four games, the Irish have yet to face a passing game explosive enough to give the newbies a proper workout. That changes today against Miami, which has lived by the deep ball the past two weeks: In consecutive games, quarterback Stephen Morris has set school and conference records for passing yards, and previously obscure 'Cane receivers – most notably Phillip Dorsett and Rashawn Scott – have averaged just shy of 18 yards per catch.

Meanwhile, Notre Dame''s offense continues to spin ts wheels over its own tenuous situation at quarterback, and seems to consider anything north of 20 points a bona fide shootout. Unless Everett Golson breaks out against an admittedly vulnerable Miami defense, Jackson and Russell cannot afford any margin of error.

•TREVONE BOYKIN • QB, TCU.
As of Wednesday, Boykin was spending most of his time at running back to add depth to a position ravaged by injuries and attrition. As of Thursday morning, he was preparing for his first college start at quarterback following the arrest and subsequent suspension of starter Casey Pachall for drunk driving. Boykin is 9-of-10 passing in garbage time with one touchdown on top of 122 yards rushing – he had a particularly impressive run against Virginia, despite fumbling at the end of it – and coach Gary Patterson has even tried to insist the Frogs may be better off with the transition: "We actually have more offense with Trevone Boykin in the game than we do with Casey Pachall in the game, because he can throw all the throws, but now you have a very athletic guy that can do a lot of other things that Casey can't do."

But that doesn't change the fact that the nation's longest winning streak is suddenly in the hands of a redshirt freshman with no relevant experience, against an opponent (Iowa State) that has plenty of experience under coach Paul Rhoads toppling vulnerable favorites on the road.