USC loses its grip on the road, until the real Trojans ride to the rescue

Assuming they've figured out the QB-center exchange, the last 57 minutes were as good as the Trojans have looked this year – and as balanced.

Share All sharing options for: USC loses its grip on the road, until the real Trojans ride to the rescue

USC 38, Utah 28
- - -
1. I wouldn't go so far as to say anyone's "manhood" was at stake, but USC's first two offensive series were about as bad as they could conceivably be short of a devastating injury. What is the appropriate scale of fail to describe a team that began the season as the No. 1 team in the nation appearing on national television to fumble away not one but two of the first four exchanges of the night between its All-American quarterback and All-American center? Less than three minutes into the game, the Utes had taken the first gaffe in directly for a touchdown and needed all of two plays to capitalize on the second for the fastest 14-0 lead of the season. That was after six offensive snaps by both teams, combined. 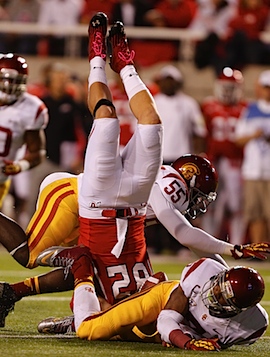 The conventional wisdom seems to be that USC's center, Khaled Holmes, was playing hurt when he probably should not have been – ESPN's Pac-12 blogger, Ted Miller, estimated Holmes was probably working at 50 percent tonight – after watching the interior line disintegrate in his absence in the Trojans' loss at Stanford. He was also lined up across from Utah's resident devour of planets, Star Lotuleilei, who gave USC all sorts of problems early on. (For his part, Holmes described the initial mistakes after the game as "inexplicable." ) But for whatever reason, one of the most explosive offenses in college football stepped on the field, on the road, in its first division game, and immediately melted down.

2. All of which is useful mainly for framing just how dominant the Trojans were from that point on. Excluding the first three minute of the game and the last three (in which Utah scored a meaningless, cosmetic drive in garbage time), USC regrouped to outscore the Utes 38-7, and outgained them by a mile, 417 yards to 228. Matt Barkley was the surgeon he usually purported to be, hitting 23 of 30 passes (including multiple drops) for 303 yards, three touchdowns and no picks; then he was the bomber, bringing Utah to its knees with an 83-yard bomb to Marqise Lee early in the fourth quarter. That score extended the lead to double digits, 31-21, and a subsequent pick-six a few seconds later by Nickell Robey that put it on ice.

On the scoreboard, this was a close game until well into the fourth quarter – before the 1-2 knockout punch by Lee and Robey, Utah either led or was within a field goal for all of the game's first 48 minutes. Had the Utes not been spotted two essentially free touchdowns out of the chute, it would have been over before halftime. And that's on an off-night on which almost everyone watching agreed the Trojans looked a little sluggish.

3. Utah's one opportunity to keep the score within reach came just before halftime, when the Utes, down 24-21, apparently scored in dramatic fashion via this weird, double reverse heave by quarterback Jon Hays that may have changed the trajectory of the game…

…had it not been negated by an irrelevant ineligible man downfield penalty, of precisely the variety that would have never come to anyone's attention, coaches included, if there's no flag. But this crew was on a mission to leave no flag left throw unthrown: Between them, both sides were hit with 27 penalties for a combined 222 yards, and in this case wound up settling for a field goal attempt that was partially blocked with a few seconds remaining in the half.

4. Utah's next five offensive possessions to open the second half:

All that was left after that was a garbage-time touchdown drive that accomplished nothing aside from getting freshman quarterback Travis Wilson some snaps and cost USC a cover on the 13.5-point spread. (Gamblers, at least, were more interested in that drive than any other of the night.) It may have been over sooner if not for a pair of missed field goals by USC's usually reliable kicker, Andre Heidari, who may have been back a little too soon from the knee surgery that's caused him to miss a few games.If USC takes any obvious issue out of the game, that's probably it. Accounting for Lotuleilei's presence against the run – and assuming old high school teammates Barkley and Holmes have figured out the QB-center exchange – the last 57 minutes were as good as the Trojans have looked this year, and as balanced.

5. Incredibly, Robert Woods actually got up from this brain-rattling block in the first quarter… and then he went down again. Hard. Like the giant 'U' logo at midfield was the $16 rug in his dorm room on the morning after his 21st birthday.

Even more incredibly, Woods was checked out and allowed back into the game almost immediately, despite face-planting on national television and insisting to trainers that he was desperately needed on his family's estate in Derbyshire. He finished with six catches for 69 yards and a touchdown.