Meanwhile, hard-hit Hokies have not yet begun to fight

Virginia Tech two ugly losses in three weeks, and a long track record of punching its way out of just such a corner.

Share All sharing options for: Meanwhile, hard-hit Hokies have not yet begun to fight

A very fake "Frank Beamer" Twitter account got a few very real answers Thursday morning when it asked its 6,000-plus followers "What's everyone so upset about?" I'm not sure that amounts to an actual joke, but as an attempt at irony, the fact that it exists – and that some Hokies fans were more than willing to unburden themselves to a tongue-in-cheek impostor – is evidence enough of the growing anxiety on the heels of Virginia Tech's second upset loss in three weeks at the hands of Cincinnati.

The same anxiety led bettors to flee from Beamer's team in such overwhelming numbers this week that the Hokies' next opponent, North Carolina, went from a two-point favorite to a six-point favorite in less than 48 hours. (This is the same North Carolina, for the record, that's already dropped a pair of games against Wake Forest and Louisville.) And in fact, countering the negativity is something of a theme this week, though Fake Beamer's reaction is the Prozac version compared to defensive coordinator Bud Foster's profane rampage earlier in the week:

As he waited for his weekly session to begin, Foster's eyes narrowed and he openly seethed at one point while cornerback Antone Exum answered questions about an afternoon in which he committed four major penalties and was targeted often by Cincinnati quarterback Munchie Legaux.
[…]
"I don’t care who was at the boundary corner. They'd attack that. We played a lot of man and that’s the short side of the field," Foster said. "You could have put DeAngelo Hall over there and they would have done the same thing. It’s just their offense. I thought [Exum] played his nuts off when it's all said and done. You can quote me on that shit, too. The kid played his ass off, fought his ass off."

But Foster didn't stop there. Looking back on the play call he had for Cincinnati's game-winning touchdown pass, "we couldn't be in a better coverage," he said, emphasizing that Virginia Tech was playing a simple deep half coverage. "That guy [the Virginia Tech safety] should've been fair-catching the ball."

He then grew even more agitated when a reporter asked if he expected Virginia Tech to execute better in that situation.

"Ya think? Is that an open ended or loaded question?" Foster fired back. "What the fuck? You don't think we're gonna plan on executing there? We'd been doing it all day."

If he means Virginia Tech had been executing in the secondary, that's debatable, on the last play or at any other point, especially by the usual standards on Foster's watch. True, the Hokies held Cincy quarterback Munchie Legaux below 50 percent as a passer (he completed 19-of-42), but they also yielded 376 yards and three touchdowns on the throws he did hit, an average of 19.8 yards per completion. In the second half alone, the Bearcats scored on a 29-yard strike from Legaux to Kenbrell Thompkins, a 76-yard catch-and-run by Ralph Abernathy through wide open plains and the game-winner, a 39-yard heave to Damon Julian. Altogether, ten of Legaux's completions covered at least 15 yards. 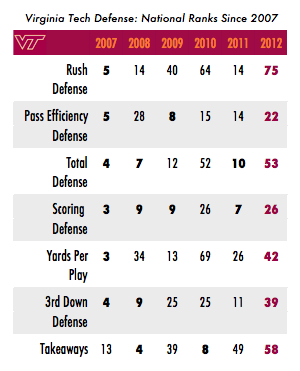 That came two weeks after Tech was rolled in much more embarrassing fashion at Pittsburgh, where the same anemic Pitt offense that had gone nowhere against Cincinnati and Youngstown State in its first two games inexplicably lit up the Hokies for 537 yards – 283 passing, 254 rushing – in a 35-17 rout. Panther tailback Rushel Shell, a true freshman seeing his first extended action, literally ran over Tech for 157 yards, more than twice his output in Pitt's other three games combined. Pedestrian quarterback Tino Sunseri burned the secondary for 283 yards, the second-best number of his career, and a career-high three touchdowns. And all of that came two weeks after the Hokies survived an overtime scare against Georgia Tech, which is subsequently looking worse by the week. In fairness to Foster's comparison, the defense in DeAngelo Hall's last year, 2003, actually wound up being just as bad. At 8-5, that team was also the last one in the Beamer/Foster era that failed to win ten games. If the oddsmakers are right about Saturday's trip to Chapel Hill, extending that streak is a pipe dream. 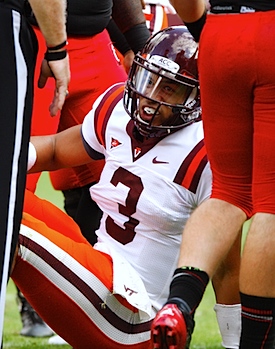 Obviously the real Frank Beamer doesn't have to ask anyone why they're upset with an 0-2 record against Big East teams, or with a season approaching the brink in the second conference game. The offensive line is green, every member of the tailback-by-rotation clique is completely unproven and the quarterback, Logan Thomas, has turned into a turnover machine when he was expected to deliver star turn en route to the draft. If the offense has identified a reliable playmaker, it has yet to figure out how to reliably get the ball in his hands. The defense, the obvious strength of last year's run to the another Coastal Division title and the Sugar Bowl… well, see above. These particular Hokies haven't earned the benefit of the doubt in any respect.

But Beamer and Foster have, repeatedly, and in this division, a proven track record is about as good as anyone has going for them at the moment. Virginia Tech has already dispatched Georgia Tech, the annual winner of which is 8-of-8 in pursuit of the Coastal title. Miami, currently in the driver's seat at 3-0 in-conference, is two plays in back-to-back wins over Georgia Tech and N.C. State away from sporting back-to-back losses. North Carolina – loser of seven of the last eight against Virginia Tech, and four straight in Chapel Hill – hasn't given any indication under first-year head coach Larry Fedora that it's anything but the 7-5 also-ran it's been for the last five years. Ditto Virginia, which hasn't beaten the Hokies since they joined the ACC nine years ago. Even after two disorienting losses, nothing has changed about their place in the division – at least, not yet.

Which has nothing to do with Virginia Tech being a good team right now, will likely will not matter until later this month, on a trip to Clemson, and in back-to-back November dates with Miami and Florida State. Everything we know about Beamer's teams in the past suggests that's exactly the time this one will be gelling into the opportunistic frontrunner that's become so familiar over the last decade. Based on what we've seen so far, that seems like a long road to hoe. But they can start this weekend by giving themselves a chance.