Night of the Crimson Tiger, 2012: The scariest thing about Alabama

A first-rate defense is just Bama being Bama. But now the Tide can get the ball downfield on offense, too?

Share All sharing options for: Night of the Crimson Tiger, 2012: The scariest thing about Alabama

1. At some point, writing about Alabama's defense became like writing about space travel, or the Internet: A marvel of modern engineering so efficient, effective and reliable for so long that any attempt to expand on the incredible fact of its existence is a waste of time. Yes, we know Alabama is good at defense. It will be good into the foreseeable future. Soon, we won't be able to remember a time when it wasn't. Alabama is so good at defense that the only novel way to communicate it without everyone's eyes glazing over is to abandon the conventional standards entirely for hypothetical dimensions in which the Crimson Tide are ranked higher than number one, or squaring off against NFL teams. Reality has been sacked and forced to leave the field.

In one sense, the hyperbolic NFL comparison is a useful window for putting the ongoing dominance of the 2012 edition into context, mainly by comparing it to the 2011 edition: That group was arguably the best defense in modern college history, reflected both in the stats – first nationally in total defense, scoring defense, rushing defense, passing defense, pass efficiency defense and third-down defense – and the ensuing draft, which snapped up six Bama defenders, three in the first round. After eight games this year, with six new starters in place of the departed draft picks, the "rebuilding" version still ranks first nationally in total defense, scoring defense, rushing defense, passing defense and pass efficiency defense, and has already forced more turnovers (23) than the 2011 D forced all year (20). The opponent is not relevant: Six of the seven touchdowns Bama has allowed have come with the Tide already leading by at least 17 points. (Emphasis on allowed.) The last opposing offense to manage more than two touchdowns was quarterbacked by Cam Newton. Six more starters could come off the board again next April, at least.

Does any of that fill you with a renewed sense of appropriate awe? After awhile, I think it's the college football equivalent of reporting Exxon Mobil just turned another $15 billion profit in the last quarter. Commence glaze. 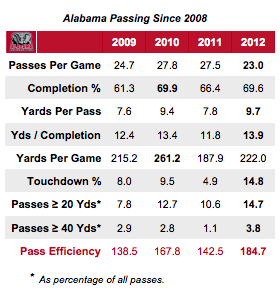 2. What really separates this team – what is truly unfair and terrifying about it – is how good it's been on offense. Obviously, that is not supposed to be the case: Even when the Crimson Tide have been loaded with talent offensively, they've always had an unspoken agreement with the rest of the SEC to deploy that firepower within the guidelines of the Bryant-Jordan Strategic Arms Limitation Treaty of 1974, which explicitly restricted the scope and legal use of the deep passing game and pledged the state of Alabama to a run-oriented philosophy that leaned heavily on its natural advantage on defense for most of the next four decades.

Before the season, the lack of a consistent big-play threat and/or a quarterback who can keep involved on a weekly basis was supposed to be the one weakness that eventually undercut the Tide's bid for a repeat, as it nearly did last year. Instead, this is the first Crimson Tide passing attack I ever recall thinking could really light up a box score if it ever seemed remotely necessary.

It hasn't, yet, but Bama has been much less shy than in the past about flashing glimpses of its big-play potential. On top of the typically deep, bruising ground game, junior quarterback A.J. McCarron is one of only two regular starters nationally who's yet to throw an interception, and currently leads the nation in pass efficiency for the second week in a row. His top three receivers, Amari Cooper, Kenny Bell and Kevin Norwood, average 17.7 yards per catch between them, with multiple touchdowns apiece covering at least 25 yards; the "possession" receiver in the group, Christion Jones, averages just shy of 15 per catch. In the opener, they burned Michigan…

That's for starters: They've also turned in big plays against Western Kentucky, Florida Atlantic and Missouri, and so many more against poor Tennessee it's hard to keep track. Altogether, the Tide are putting up 214 yards per game rushing, 222 passing, and 41 on the scoreboard, which is on pace for a new school record. On paper (and on the chalkboard), it's the same offense that took nearly eight full quarters to put the ball in the end zone against LSU last year, but in so many ways it's not the same at all.

3. If there is a difference between the Tigers and Crimson Tide on Saturday – and let's face it, blemish on LSU's record notwithstanding, these are more or less carbon copies of the teams that beat each other within an inch of their lives last year in two end zone-averse slug fests – that's it: Alabama has a reliable, veteran quarterback who's played in (and won) this game before, and LSU does not. LSU has Zach Mettenberger, who still looks more like a liability against competent defenses than an asset. In four SEC games, Mettenberger has completed fewer than half of his passes (46.2 percent) with one touchdown to two interceptions, including the awful pick against South Carolina that nearly derailed the Tigers' season:

Mettenberger's 12-of-25, 158-yard performance against the Gamecocks was a virtual rerun of his 11-of-25, 148-yard performance in the loss to Florida a week earlier, both of which hewed closely along the lines of his 15-of-27, 169-yard effort at Auburn. The last time we saw him, against Texas A&M, he was an abysmal 11-of-29 passing, for an even more abysmal 3.3 yards per attempt, against a secondary that had been routinely shredded through the air. Unlike Alabama's emerging targets, there's no reliable deep threat among the Tiger receivers, a la Rueben Randle in 2011, although it's not clear at all at this point that it would make any difference if there was. 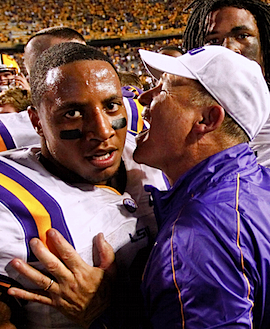 4. What LSU does have, of course, is the only defense in the country that can begin to match Alabama's athletically and statistically – the Tigers also rank among the top 10 nationally in every relevant category, including turnover margin – and one that has been particularly ruthless against big plays: In eight games, opposing offenses have completed exactly one pass for longer than 30 yards, fewest in the country. (The lone exception? An 80-yard touchdown pass by North Texas in the season opener.) In the loss to Florida, the Tigers didn't give up a single play longer than 17 yards, and that was on an ad-libbed quarterback scramble; no other play for the Gators went for more than 14 yards. Sans a top-ten draft pick at one corner and a Heisman Trophy finalist at the other, the secondary has been brilliant, and the blue-chip pass rush has been as advertised.

Which leaves us right back where we started, with two sides content to reenact the Battle of Passchendaele until one or the other staggers into a decisive mistake. Given the polar-opposite performances to date by the quarterbacks – to say nothing of Alabama's thorough ownership of LSU's coaching staff in the BCS blowout in January – every piece of evidence at our disposal suggests the source of that mistake will be Mettenberger. But as we know all too well in this rivalry, past results are not necessarily an indication of future returns.

5. Predictions…
• LSU attempts a fake punt or field goal early, which goes horribly awry.
• A.J. McCarron's eleven-game streak without an interception will end at the hands of LSU safety Eric Reid.
• Neither offenses reaches 100 yards rushing (including negative sack yards) as a team.
• Both offenses do score touchdowns, although no more than three, and at least one will be set up by the defense courtesy of a turnover.
• Alabama wins, 19-13.