Top 25: Choose your own November adventure

Share All sharing options for: Top 25: Choose your own November adventure

This is always my favorite point on the college football calendar: That fleeting sweet spot when just enough of the season has past to establish the leading players for the home stretch, and just enough remains to put them through some inevitable drama. Of the top ten teams in the BCS standings on Oct. 31, 2011, eight of them went on to lose games in November they were favored to win. In 2010, five of the top ten at the end of October were eventually upset. As of Halloween 2007 two of the top four included undefeated Boston College and Arizona State, and that was the most sane and stable week of that entire season.

So to the Big Question of "Who's No. 2?" this week behind the all-powerful Death Star that is Alabama, I think the only appropriate answer is, let's wait and see. If I could, I'd give all three spots behind Bama over to a three-way tie between Kansas State, Notre Dame and Oregon and leave it to the entropic whims of the universe to sort them out. Since I can't do that, I went with 2. Kansas State, 3. Notre Dame, 4. Oregon, under the reasoning that the Ducks have been the most dominant, but the Irish have played the toughest schedule, and the Wildcats have the best combination of the two. (With Saturday's 55-24 rout over Texas Tech, K-State has dispatched three ranked opponents – all still ranked here and elsewhere – by a combined 77 points.) I am extremely confident, however, that that order will not remain for long, if it manages to survive the coming weekend. Until then, this is just another snapshot.

• TRUST NOT TRANSITIVE. By my standard logic, Florida is still solidly ahead of Georgia despite the Bulldogs' win in the Cocktail Party – it's not close, really – so I've been slightly baffled that literally every single poll I've come across this week bows shortsightedly to the head-to-head result rather than the Gators' superior body of work over the entire season. Head-to-head is a useful tiebreaker between otherwise similar teams, but the resumés in this case are not that similar: Before Saturday, Georgia had yet to beat a single team with a winning record, and had been crushed in its only attempt, a 35-7 debacle at South Carolina.

On the other side, Florida had just beaten the Gamecocks handily, as well as Texas A&M (on the road) and LSU, which remains the single most impressive scalp on anyone's wall this season. The Gators were well ahead of Georgia. A blowout in Jacksonville on the order of Carolina's romp over UGA (or Florida's romp over Carolina) might have been enough to close that gap. A close, often sloppy win decided by one score in the final minutes is not.

That said, Georgia now controls its own fate re: the SEC Championship Game, where they can shut up the haterz in a hurry by beating whichever indomitable colossus emerges from the West. Finish the drill, and there will be no doubt.

• TIGER BUBBLE. While I'm in a crabby mood over suspect schedules, what's with the widespread sentiment for Clemson in the top ten? Again, the Tigers have not beaten a team with a winning record, and were trounced by Florida State in their only attempt. Predictably, the offense has looked very good against highly flammable competition, and the defense has looked …not as good. Until South Carolina comes to Death Valley on Nov. 24, the jury is out on Clemson as a BCS-caliber outfit – and that's only assuming they don't submit to another ritual Clemsoning against Duke or N.C. State in the meantime.

• RAISING ARIZONA. On a more positive note! Just below Clemson, the obvious riser this week is Arizona, fresh from a strong, come-from-behind upset over USC that lifted Zona ahead-and-shoulders above any other three-loss outfit in the country. In the first place, all three losses have come at the hands of top-15 opponents (Oregon, Oregon State and Stanford) with a combined record of 20-3, two of which went down to the wire. On the other hand, the Wildcats have offset those setbacks with quality wins over Toledo (the Rockets are 8-0 since opening night in Tucson, including an upset over Cincinnati), Oklahoma State, Washington and now USC. With the head-to-head tiebreaker over the Trojans under their belt, and the Trojans bracing for the Oregon buzzsaw on Saturday night, a road breakthrough at UCLA would put Arizona in very, very good position in the Pac-12 South. 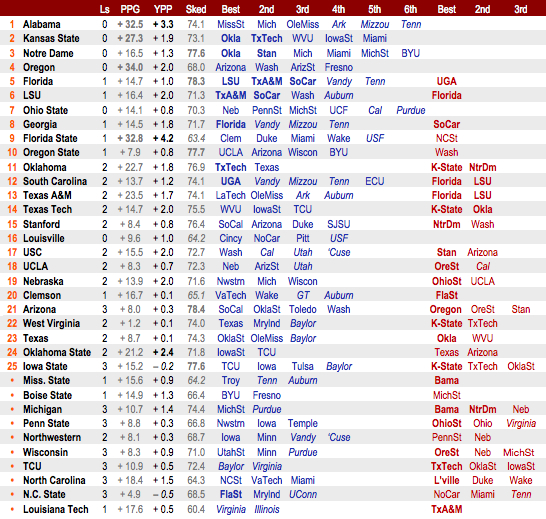