Around the Scorn: Michigan calls for more backup

Share All sharing options for: Around the Scorn: Michigan calls for more backup

• SHOELACE INSURANCE. Michigan failed to score a touchdown Saturday in a 23-9 loss at Nebraska, the third time this season the Wolverines have been held out of the end zone entirely, and the last remaining members of the Denard Robinson fan club are resigned to waiting patiently for the clock to run out on their hero's college career before he descends any further into mediocrity. It's been a depressing turn. Among the partisans, the factions seem fairly evenly split on whether blame for the malaise should fall on Robinson himself, or on his awkward marriage to an offensive coordinator, Al Borges, who either refuses or simply doesn't know how to exploit fear of a running quarterback in the passing game. But the basic premise is not debatable: By every relevant standard, Denard the senior is lagging well behind the curve set by his spectacular sophomore self back in 2010. 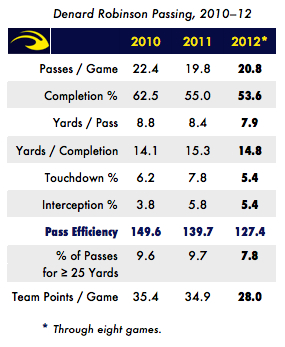 Still, the Maize-and-Blue set got a sobering reminder in Lincoln of just how valuable Robinson remains to the offense when it had to operate without him (or try, anyway) in the second half. With Robinson nursing an arm injury on the sideline, backup Russell Bellomy missed on his first ten throws, finished 3-of-16 for the night and completed as many passes to Nebraska defenders as to his own receivers. Over the last two quarters, Michigan failed to earn a first down on four of six possessions and scored three points. This week – surprise! – Russell Bellomy has been unofficially demoted from Plan B:

Robinson improved enough that Hoke expected him to practice all week, which is crucial for him to play Saturday [at Minnesota]. While Hoke conceded other positions such as running back, receiver and defensive end can play with limited practice time, he said that's not possible -- at least in his coaching philosophy -- at quarterback.

This means Michigan will plan for the other scenario as well. Receiver Devin Gardner, who backed up Robinson all last season before moving to receiver, will get more quarterback work this week in practice than he has most of the season.

"We will do that as a precautionary thing, to give him more snaps, him and Russell both," Hoke said. "Which means you'll add a few plays to our (practice) script."

…which also means you'll be taking away reps for Gardner at wide receiver, where he's still raw despite emerging as Robinson's most productive target over the first half of the season. At any rate, if it didn't happen now, it was bound to later: Besides providing a more secure security if (when?) Robinson is knocked out of another game, Gardner is still in line to take the torch as the heir apparent next spring – at least until they're comfortable enough with hotshot recruit Shane Morris to let Gardner go back to catching passes, however long that takes.

• BROTHER, CAN YOU SPARE A QUARTERBACK? You know who would kill to be having that kind of discussion about its quarterbacks right now? Maryland, which has finally exhausted its supply of scholarship quarterbacks after true freshman Caleb Rowe tore his ACL in the fourth quarter of Saturday's loss to Boston College, making him the fourth different Terp quarterback to go down with a season-ending injury since August.

"I don't know if something like that has ever happened to a team at this position," Maryland coach Randy Edsall said after describing how Rowe, a promising freshman, suffered the left-knee injury on a third-down play but told the coach he was fine and remained in the game. Edsall said the ligament tore away from the bone and that the player probably faces surgery and a five-to-six month recovery period.

Maryland led 17-13 when Rowe went back to pass on third-and-12 near midfield. Unable to find a receiver, he headed for the sideline and was tackled just as he went out of bounds. Rowe paused before getting up and remained in a kneeling position, staring at his left knee. He then walked to the bench and was examined by the training staff.

Edsall noticed there was some blood on Rowe's shin — it's not clear why. "What Caleb said is, 'Oh, it's just my shin,'" the coach said.

Rowe remained in the game and threw an interception on the next series as Boston College won, 20-17.

"That's just the ligament torn from the bone it normally regulates, coach, don't sweat it." Okay!

Rowe's injury – on the heels of season-ending injuries to predecessors C.J. Brown (ACL), Perry Hills (ACL) and Devin Burns (foot) – leaves Maryland with literally no choice but to turn to a true freshman linebacker, Shawn Petty, who ran the option in high school. He'll be backed up by a true freshman walk-on, Brian McMahon, who was also a quarterback in high school but is listed as a tight end. There's still a month to go in the regular season, and games against Clemson, Florida State and North Carolina.

• GET WELL SOON. HELL, JUST GET WELL. The official word is in from South Carolina on the terrible knee injury suffered Saturday by tailback Marcus Lattimore, and it is just vague enough to allow us to keep hoping for the best while still fearing the worst:

University of South Carolina junior running back Marcus Lattimore suffered a significant impact to the front of his right knee during the Tennessee game on Saturday. The ensuing hyperextension of the knee resulted in injury to several ligaments. There were no fractures or additional injuries, according to team physician Dr. Jeffrey Guy. Lattimore's surgically repaired left knee was uninjured during the play.

Lattimore is resting comfortably and will continue to be evaluated over the course of the week. Marcus has already begun the process of prehabilitation prior to surgery and to his eventual return to football.

"Prehabilitation" is a new one to me, but the upshot is this: No one seems to have a very good idea if Lattimore will be able to play at a Division I level again, or when, or how much of his old form he'd be able to regain if he does. The suggested precedent is Willis McGahee, who never played for Miami again after suffering a similarly devastating knee injury in the 2003 Fiesta Bowl, yet still went on to a become a first-round pick by the Buffalo Bills and remains a productive player for the Denver Broncos nearly a decade later. That sounds like a best-case scenario.

Unlike McGahee, Lattimore is probably not likely to skip the rest of college career, though he may be forced to use a redshirt next year and return as a fifth-year senior in 2014. Any result that ends with him on the field with a shot at the pro career he deserves is a best-case scenario.

Remember that, kids. Take it to heart.

• TO HAVE AND HAVE KNOTT. Elsewhere on the injury front, All-Big 12 linebacker Jake Knott will undergo season-ending shoulder surgery, likely ending his stellar career at Iowa State on the same day he was honored as the Big 12 Defensive Player of the Week for his effort against Baylor. The day before that game, rumors began circulating on campus that Knott wouldn't play because of the shoulder, which he originally injured last December in the Pinstripe Bowl and apparently re-injured earlier this month against Oklahoma State; after the game, he told reporters asking about the shoulder that "it's not bad" and "I can deal with it tomorrow." The next day, he opted to get it fixed.

There is an outside chance Knott could return for a bowl game, depending on the success of the surgery and what doctors find when they operate. (And on the Cyclones actually qualifying for a bowl game.) Otherwise, the 6-foot-3, 253-pound senior from Waukee, Iowa, will go out with 324 tackles (205 solo, 119 assisted) to his name over the last three years, along with eight interceptions and 10 forced fumbles. As a sophomore in 2010, he was voted honorable mention All-Big 12 after finishing third in the conference with 130 tackles; last year, he was voted first-time all-conference by Big 12 media types and second-team by Big 12 coaches. Through eight games this year, Knott was the conference's leading tackler with 79 total stops, 55 of them solo.

• THAT'S SO TEXAS. Texas Tech is 6-2 with quality wins over West Virginia and TCU, and therefore in the rare position of claiming (plausibly, anyway) the title of "Best Team in Texas" with the Longhorns en route to Lubbock this weekend. That kind of opportunity doesn't come every day, and to seize on it, the Red Raiders will attempt to out-Texas Texas Saturday by hitting the field in what may well be the most Texas-y uniforms ever worn by a Texas team under a Texas-colored Texas sky in the great state of Texas. 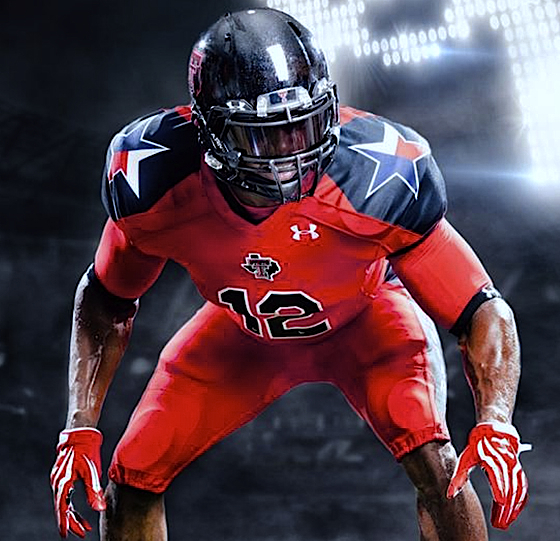 Not quite visible there: The helmet logo will feature an outline of the state, and the word "Lone Star" will run down the side of the pant stripe; the star itself also adorns the socks. You know, just in case someone didn't quite get the message on the way down.

QUICKLY…
• As expected, the NCAA's Division I Board of Directors has approved a new enforcement model designed to mete out punishment more efficiently and consistently. This has been in the works for a long time, and is kind of a big deal.
• Wisconsin quarterback Joel Stave is out for the rest of the season with a broken collarbone, although at this point – with Ohio State and Penn State ineligible for the Leaders Division crown and Illinois and Purdue already out of the running – the Badger offense could literally kneel out the entire month of November and still land in the Big Ten Championship Game.
• Auburn plans to introduce its third different starting quarterback of the season Saturday against New Mexico State, this one a true freshman, because why the hell not?
• Oregon State decides it will stick with Cody Vaz to pull the Beavers out of their one-game losing streak.
• Boise State's latest BCS run will proceed without a pair of starters in the secondary.
• Virginia suspends three players for Saturday's trip to N.C. State, including a starting linebacker.
• After three-and-a-half years, Bob Stoops still finds himself defending his senior quarterback.
• Arizona quarterback Matt Scott claims that vomiting on the field following a head shot against USC was not an indication of a potential concussion.
• A Louisiana judge orders Jordan Jefferson back to jail for violating his probation.
• I wonder if the name Ron Powlus means anything to Johnny Manziel?
• Utah's lame duck attorney general is finally dropping his longstanding legal crusade against the lame duck BCS.
• These bros from the early stages of Hurricane Sandy are going to clean up at the next Bro Awards.
• Purdue's athletic director is the latest to release a statement assuring fans he really is concerned about the team's losing record, and also the latest to stop well short of blaming the head coach.
• And really, since when has anyone actually needed healthy knee ligaments to be the Boilermakers' starting quarterback?