AROUND THE SCORN: Nick Saban has seen the future of football, and demands it get off his lawn

Nick Saban vs. these kids today, John L. Smith vs. his balance sheet and the Big 12 vs. possibly erroneous reports about the Big 12, all in today's roundup.

Share All sharing options for: AROUND THE SCORN: Nick Saban has seen the future of football, and demands it get off his lawn

1. SABAN ATHWART HISTORY. Nick Saban doesn't see much of the hurry-up/no-huddle thing in the SEC – in fact, Mark Richt has complained in the past that SEC officials deliberately discourage the kind of up-tempo attack he favored at Florida State by taking their time to set the ball between plays – but of course, that won't stop him from complaining about it as the inevitable downfall of the sport:

"I think that the way people are going no-huddle right now, that at some point in time, we should look at how fast we allow the game to go in terms of player safety," Saban said on today's SEC teleconference. "The team gets in the same formation group, you can't substitute defensive players, you go on a 14-, 16-, 18-play drive and they're snapping the ball as fast as you can go and you look out there and all your players are walking around and can't even get lined up. That's when guys have a much greater chance of getting hurt when they're not ready to play.

"I think that's something that can be looked at. It's obviously created a tremendous advantage for the offense when teams are scoring 70 points and we're averaging 49.5 points a game. With people that do those kinds of things. More and more people are going to do it.

"I just think there's got to be some sense of fairness in terms of asking is this what we want football to be?"

I beseech you, upstanding, clean-cut citizens, in the name of God and Bear Bryant, are you going to merely stand by and watch while Communist infiltrators besmirch the violent, punt-preserving traditions of this great game with more touchdowns? Welcome to Obama's America. </topical> 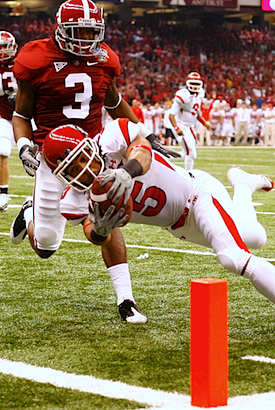 Like all coaches, Saban has been burned by the hurry-up/no-huddle before, most memorably in the 2009 Sugar Bowl, when Utah came roaring out of the chute with three touchdowns on its first three possessions en route to a 31-17 upset. (Utah quarterback Brian Johnson finished that game with 336 yards, three touchdowns and a 158.8 efficiency rating, arguably the best performance against Alabama by any non-Heisman-winning quarterback in Saban's tenure.) And barring an early retirement, he will be burned again, because trend is approaching critical mass, even within the hard-knockin' confines of the ess-ee-cee after the introduction of no-huddle strains via Texas A&M and Missouri. Even the freaking NFL is hip to the spread now. If you don't have time for this shit or you can't get your defense lined up, that's your problem.

By the way, who's going on "14-, 16-, 18-play drive(s)"? The longest drive in Saturday's West Virginia-Baylor game – the current paragon of the up-tempo/no-huddle philosophy – was 11 plays, and the average was 6.4 plays. Obviously, part of the point of accelerating the tempo is to wear the defense out, to the extent that some teams have resorted to faking injuries to buy a few extra gasps of breath between snaps. But you'd be hard-pressed to prove that defenses suffer more actual injuries against up-tempo attacks, because they don't – if anything, considering these schemes tend to be less "physical" than a conventional "power" offense like Alabama's, I'd guess exactly the opposite. It goes without saying that Saban has forgotten more about strategy than I'll ever know, but that doesn't preclude him from being just another old man bitching about these kids today.

2. SMILE OH GOD SMILE. At last count, bankrupt Arkansas coach John L. Smith owed creditors more than $25 million, and the contents of his checking account stood at somewhere between 300 and 500 dollars. Surprise! Mirroring the bad-to-worse trajectory of his team, it turns out Smith actually owes many millions more than previously reported (emphasis added):

Razorbacks head football coach John L. Smith has amended his bankruptcy filing to show $40.7 million in debt, up from the $25.7 million he showed in his original filing.

The amendment, filed in federal court on Wednesday, shows $40.7 million in liabilities and $1.3 million in assets.
[…]
The amended document now shows an additional $15 million owed to Branch Banking & Trust in Louisville, Ky. It also shows that Smith recently cashed in a life insurance policy, stocks and an annuity held with his wife to pay bills and add money to his checking account.

Smith's salary at Arkansas is reportedly in the neighborhood of $850,000, or roughly 2.1 percent of $40.7 million. Funny: Back when he was hired for an emergency, 10-month interim gig, that salary really sounded like a lot.

3. INCONCLUSIVE REPLAY MEANS NEVER HAVING TO SAY YOU'RE SORRY. To my eyes, Oklahoma State did not have a legitimate complaint on Texas' game-winning touchdown run on Saturday night, because who can tell what the hell is going on amid this mass of bodies on the goal line?

Answer, according to The Oklahoman: The Big 12's head of officials, who reportedly called Oklahoma State coach Mike Gundy to offer his contrition for getting the decisive call wrong:

Walt Anderson "apologized profusely" while telling Gundy that Texas running back Joe Bergeron did indeed fumble before crossing the goal line and the touchdown call on the field was incorrect, the source said.

The source said Anderson told Gundy the call was botched by head linesman Brad Edwards, who signaled touchdown too soon without proper view of the ball, which was fumbled before it broke the plane of the end zone. Edwards was originally positioned on the goal line on the UT sideline, then sprinted toward the pile and put his arms in the air.

For the record, the Big 12 responded almost immediately to deny that there has been an official apology, undercutting The Oklahoman and leaving the play in the eye of the beholder. This beholder still says Oklahoma State was probably better off that Bergeron was awarded the score with 29 seconds left, allowing the OSU offense a chance (however slim) to respond, rather than letting Texas bleed the clock down for a chip-shot field goal to win as time expired.

At any rate, I'm not convinced on the call, and I'm certainly not prepared to concede a moral victory to the Cowboys. OSU outgained the Longhorns by 142 yards, 582 to 440, but also negated that advantage by allowing a kickoff return for a touchdown and settling for three field goals inside Texas' 20-yard line. (They also missed on a fourth field goal attempt from a little further out.) Prior to the game-winning drive, the Longhorns embarked on two other touchdown marches covering 75 yards apiece in their previous three possessions. Before Bergeron's phantom plunge, Oklahoma State could have slammed the door shut with a stop on a critical 4th-and-6 situation earlier in the same drive. For the night, Texas was 3-for-3 on fourth down, and converted all of them into points. If OSU takes advantage of even one of those opportunities, the borderline officiating flub is irrelevant.

4. GLASS HALF-EMPTY. That said, while Texas' offense won over most of the remaining skeptics in Stillwater, the defense is still causing Mack Brown to break out in hives when he looks at the rest of the schedule:

"It's obviously affecting us right now," Brown said. "We're going to have to look at playing different people. We have enough video of guys that continue to miss tackles.

"We'll give up 70 this weekend if we don't tackle better than we did Saturday night." 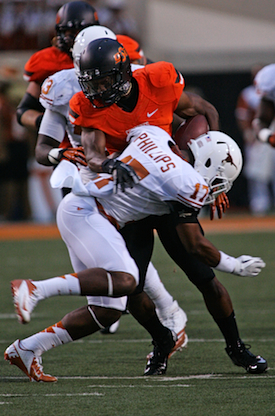 Brown didn't specify what he meant by "different people," but based on the most recent depth chart for West Virginia, the strong safety spot heretofore occupied by Adrian Phillips is up for grabs. (Hint: Odds are he didn't wrangle the Cowboy in that picture to the ground.) UT also hopes to have linebacker Jordan Hicks back this week from a hip injury that kept him out of the Oklahoma State game, although something tells me the Longhorns' fate Satuday isn't going to be decided by the linebackers.

Quickly… It's sounding more and more like Tyrann Mathieu is going to be back at LSU in 2013. … Georgia's leading receiver was just ruled out for the season with a torn ACL, just ahead of arguably the Bulldogs' biggest game of the season. … Denard Robinson was in a "funk" that lasted for days after his four-interception meltdown at Notre Dame. … The ACC won't be going to a nine-game conference schedule, after all, now that nearly half the conference will be playing Notre Dame on annual basis. … I am inexplicably obsessed with this gif of Mussolini and vow to deploy it at every possible opportunity. … And here is a thing you should read about the abominable yet wildly profitable rise of Bleacher Report, especially if you're already familiar with the abominable yet wildly profitable rise of Bleacher Report.