Kent State beat Rutgers Saturday at Rutgers, 35-23, which is news enough in its own right for a) Knocking the Scarlet Knights from the dwindling ranks of undefeated teams, and b) Forever vanquishing the zero in Kent State's all-time, 0-22 record against ranked opponents. In context, though, what's really astonishing about the win was how little it resembled a random upset as opposed to a program-making breakthrough.

That may be jumping the gun a bit. BUT: At 7-1, the Golden Flashes already have more wins under their belts than any Kent State outfit since the 1987 squad coached by a young Glen Mason. (That was considered such an achievement after a decade of losing records that Mason was immediately snapped up by Kansas.) At this rate, they also seem destined for Kent State's first bowl game since the 1972 Tangerine Bowl under coach Don James, whose winning ways at Kent eventually propelled him to a two-decade stint as "Dawgfather" at Washington. (Coincidentally, members of the '72 team included defensive backs Nick Saban and Gary Pinkel.) Since James embarked for Seattle, the 2012 edition will be just the fifth winning season in 38 years.

The upshot of that little history lesson is that coaches who accept the Kent State job do so with the full knowledge that they are entering a black hole from which their careers may never emerge – anyone heard from Dean Pees lately? Pete Cordelli – but also that there will likely be a bigger opportunity waiting for them if they do. With this team, Darrell Hazell has emerged in just his second season, with bigger goals (see: Kent's first MAC championship since '72) still well within reach. Considering he only has stars Roosevelt Nix and Dri Archer at his disposal for one more year after this one, this is the time to make hay. 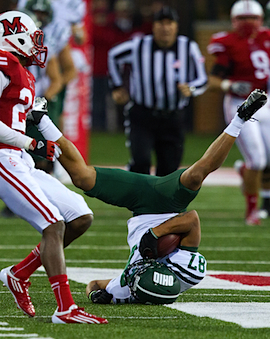 • MAC-TION HEROES. Hey, Ohio lost! Yes, after three weeks of dancing with the devil in narrow wins over three of league's worst outfits, UMassm Buffalo and Akron, the Bobcats finally bit the dust Saturday in a 23-20 loss at the hands of Miami (Ohio) of Ohio that featured zero touchdowns in the second half. With that, the last undefeated team outside of the "Big Six" leagues has fallen, guaranteeing that the regular season will end without a single unbeaten interloper for the first time since 2005. Not that the Bobcats had any realistic hope of sliding into the "BCS Buster" category out of the MAC – and not that the category will even exist after the playoff arrives a couple years from now – but the further we move away from it the safer I think it is to say that we're going to look back on the five-year window from 2006-10 as the Golden Age of the Underdog.

• ALL THE WAY DOWN. On the complete opposite end of the spectrum, Southern Miss ventured even deeper into the pit of despair Saturday with yet another lopsided, turnover-marred debacle at Rice. The final score this time: 44 to 17, the Owls' largest margin of victory ever against a Conference USA opponent in eight years in the league.

Predictably, the culprit (again) was giveaways, five of them, marking the fourth consecutive week the Golden Eagles have finished minus-2 or worse in turnover margin. I guess once you're down to your fourth and fifth-string quarterbacks en route to your eighth consecutive defeat, just making it through an entire game without one of their relatives being led from the stands by police counts as a moral victory.

• YOU SAID YOU WANTED TO BE A PART OF SOMETHING SPECIAL. This is kind of like analyzing the presidential election by focusing on who's going to carry New Hampshire and New Mexico, but: If the neck-and-neck BCS race happens to come down to fractions of a point, note that Oregon's mid-major victims, Arkansas State and Fresno State have a slightly better combined winning percentage at the moment (.647) than the ostensible patsies dispatched by Notre Dame (.588 between Navy and BYU) or Kansas State (.375 by North Texas). If this information is remotely relevant to which team winds up getting a golden ticket to the BCS title game in December, I'll bring marshmallows for the farewell bonfire fueled by the BCS computers.

MID-MAJOR GAME OF THE WEEK: Florida Atlantic 34, Troy 27.
Hmmm… OK, see, I can tell already I'm going to have to resort to desperate measures to get your attention here, so let's all give a big a round of applause to the Florida Atlantic Dance Team!

Thanks girls. You're all looking lovely, as always. But for the first time this year, you weren't the most exciting product on the field: Saturday, that title actually belonged to the FAU football team, which snapped a 13-game Sun Belt losing streak on a nine-play, 74-yard drive for the game-winning touchdown, a 22-yard pass from senior Graham Wilbert to sophomore WIlliam Dukes with 17 seconds on the clock.

That was actually a rousing display of resilience from a 1-6 outfit that could have easily thrown in the towel after blowing two separate leads, first allowing the Trojans to rally from a 17-0 deficit to tie with 17 unanswered points in the final five minutes of the first half, then blowing a 26-17 advantage in the second half of the fourth quarter. Troy went ahead 27-26 with just 1:49 to go on a 31-yard run by Shawn Southward, and the Owls' goose was looking pretty well cooked. Instead, Graham connected on six of seven passes on the final drive, the last one finally putting FAU over the top on his fourth TD pass of the day. When the history books are written, Carl Pelini's first FBS win as a head coach is destined to go down alongside the 2007 New Orleans Bowl and the the come-from-behind, 7-3 win over Wagner on opening night as one of the greatest moments in Owl history. 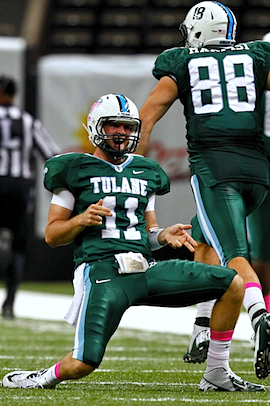 Tulane entered the weekend ranked dead last nationally in both total and scoring offense, averaging a horrifying 13.1 points on 251 yards per game through the first seven. (The best offense in Conference USA, Marshall, would consider that a disappointing half.) Somewhere en route to the Superdome, though, Williams found his muse – possibly residing somewhere in the less-than-daunting UAB secondary – finishing the day with a career-high 466 yards and five touchdowns in a 55-45 Tulane win.

For the game, two different Tulane receivers (Ryan Grant and Xavier Rush) each went over 100 yards with a pair of touchdown catches apiece. In one night, the Green Wave gained more yards (619) than they managed in their first three games combined, and scored more points than they managed in their first five.
- - -
Honorable Mention: Houston cornerback D.J. Hayden intercepted two passes in the Cougars' 45-35 win over UTEP, returning one of them for his second pick-six in as many games. … Fresno State quarterback Derek Carr passed for 416 yards and four touchdowns in the Bulldogs' 49-32 win over New Mexico. … And Western Kentucky defensive end Quanterus Smith set a Sun Belt Conference record with five sacks in the Hilltoppers' 14-6 win over Florida International, his third game this year with at least three.

• UPSET OF THE WEEK: Kent State 35, Rutgers 23.
The Golden Flashes outrushed Rutgers by 128 yards, amassed a 14-minute advantage in time of possession and picked off Knight quarterback Gary Nova six times. Again, by the end of the year, this is not going to look like the stunner it was on Saturday.

A SOMEWHAT ARBITRARY MID-MAJOR TOP 10.
1. Boise State (7-1). Broncos looked significantly more Bronco-like in October than they did in September.
2. Louisiana Tech (7-1). Good job/good effort on the schedule, Bulldogs, but turns out those wins over Illinois and Virginia don't mean as much as you'd hoped, at least until the Illini or Cavaliers win a game in their own conferences.
3. Kent State (7-1). Win at Rutgers is arguably the best on this list. Not arguable, actually.
4. Toledo (8-1). Rockets have won eight straight since taking Arizona to overtime on opening night, which was at least as good an effort in Tucson as USC just turned in over the weekend.
5. Ohio U. of Ohio (7-1). It was a good run, but I'm not going to miss waffling on whether or not to include the Bobcats in my weekly top twenty-five.
6. Louisiana-Monroe (6-2). September upset darling is alone at the top of the Sun Belt standings heading into November.
7. Northern Illinois (8-1). Defending MAC champs have quietly won eight straight with doormats UMass and Eastern Michigan among the final three. The third: A decisive date with Toledo for the West Division.
8. BYU (5-4). At some point in the Notre Dame-Oklahoma game, I'm pretty sure Brent Musburger suggested the Fighting Irish's win over BYU had gained in value based on the 41-17 thumping the Cougars put on Georgia Tech. Obviously Brent Musburger has not seen Georgia Tech play.
9. Utah State (7-2). Aggies have designs on the final WAC championship, which will probably be decided in a couple weeks at Louisiana Tech.
10. Tulsa (7-1). Golden Hurrican can make it eight straight Saturday at Arkansas, at which point someone outside of northeast Oklahoma may actually notice.
- - -
Honorable Mention: Air Force, Central Florida, Fresno State, Nevada, Western Kentucky.

Next Week: Southern Miss gets its best chance yet at a win against UAB. … ESPNU puts Eastern Michigan on national television. … And New Mexico State attempts to make Auburn's Gene Chizik the first head coach fired via on-field catapult.