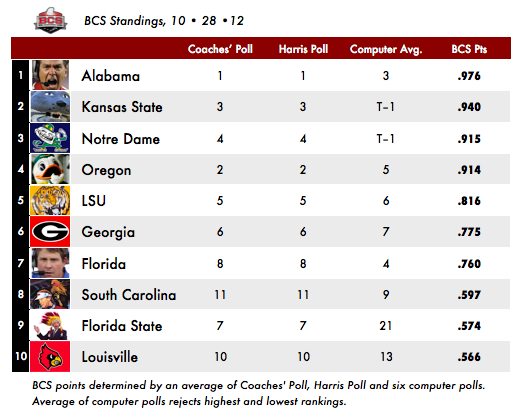 Oregon fans: Chill. Give it some time. Let the computers get to know you. Once they've seen the real Ducks, they can't help but fall in love.

True, at the moment, the algorithms are smitten with Kansas State and Notre Dame, both of whom benefit this from the combination of a) Impressive wins over Texas Tech and Oklahoma, respectively, and b) Florida's stumble against Georgia, clearing the way for the Wildcats and Irish to fill the void left by the Gators' loss. As a group, the computers are so unimpressed with Oregon's strength of schedule so far – remember, they're not allowed to account for the Ducks' huge margins of victory – that they're still relegating the Ducks to No. 5, behind Florida. At this point in the season, it's usually a steep climb from No. 4 to No. 2 unless one or two of the top teams oblige by losing.

In Oregon's case, though, the schedule is about to supply at just the right time: Three of the Ducks' final four opponents (USC, Stanford and Oregon State) are currently ranked in the top 20 in every poll, and if they make it through that gauntlet unscathed, a fourth – most likely USC again, although possibly UCLA or Arizona – will almost certainly be waiting in the Pac-12 Championship Game. Meanwhile, Kansas State and Notre Dame are hitting significantly friendlier stretches over the next month that should give Oregon a golden opportunity to close the gap in the computer rankings, and neither will have an extra chance to pad the numbers in a conference championship game. 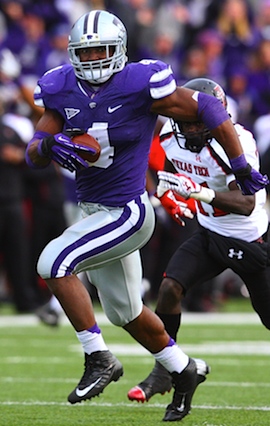 Even if the tougher stretch run isn't enough to actually move the Ducks ahead of the Irish and/or Wildcats in the computer rankings, their iron grip on the human votes should be more than enough to get them over, albeit in inevitably controversial fashion. (Obviously, controversy in the case of three or four undefeated teams is a given under any circumstances.) Right now, the prescription for all relevant parties is to stay patient, keep winning, hope for the usual chaos among the other contenders and let the chips fall where they will.

• LESSER OF TWO EQUALS. The really difficult question this week isn't whether Oregon can make the leap from No. 4 to No. 2 without a Notre Dame or Kansas State loss, but which one of them would get the nod if Oregon or Alabama happens to lose. At the moment, the Wildcats and Irish are tied for the top average across the computer polls, and very close in the human polls. Kansas State's remaining schedule (Oklahoma State, at TCU, at Baylor, Texas) is tougher top-to-bottom than Notre Dame's, which is about to serve up three ostensible gimmes in a row in Pittsburgh, Boston College and Wake Forest. But it doesn't offer the potential crown jewel that Notre Dame has in its Nov. 24 trip to USC, either, which will inevitably carry some weight with human voters despite the Trojans' flirtations with collapse. Then again, K-State will be hoping for the same kind of sentiment if they finish off the Longhorns a week later.

In terms of their respective resumés, I think the Irish and Wildcats are too close to call both in my own opinion and in my reading of how they'll shake out in the actual polls – aside from a few cosmetic scores in the final minutes, even their respective upsets at Oklahoma were basically identical. The only obvious difference in my mind is that Notre Dame is NOTRE DAME, finally emerging from 20 years in the wilderness, which could make enough of a difference in the minds of human voters (especially the ones who make up the Coaches' and Harris polls) who still aren't accustomed to thinking of Kansas State as national championship material. But that is only a guess, at a point when the smart bet is still on one or the other – or both – answering the question themselves by dropping a game over the next five weeks.

• REALPOLITIK TOP TEN. Taking into account all possible scenarios at the end of the season, here's the most likely pecking order for tickets to the BCS Championship Game, with a dividing line separating fantasy from reality: 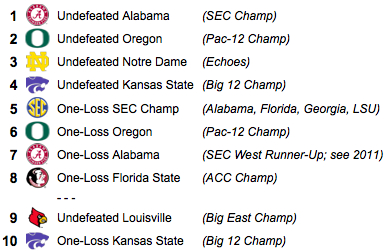 While it is still technically possible for four different teams to fill the role of "One-Loss Champion," only LSU and Georgia can get there without any help. After Saturday's head-to-head loss against UGA, Florida's only hope for taking the East Division is an extremely unlikely upset by either Ole Miss or Auburn that knocks the Bulldogs out of the driver's seat, which would easily rank among the weirdest turns in BCS history. If LSU upsets Alabama on Saturday, the Crimson Tide can only claim the West Division crown if the Tigers are subsequently ambushed by Mississippi State, Ole Miss or Arkansas – not quite as farfetched as Georgia falling on its face with tickets to Atlanta in hand, but still on the outer fringes of reality at this point. 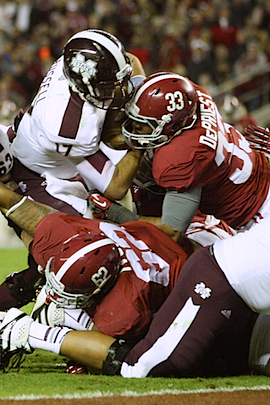 I'm certain there is a scenario under which Alabama can repeat last year's path to the championship game by losing to LSU, sitting home on Dec. 1 and still sneaking into the No. 2 position as SEC West runner-up. But so many things would have to go wrong for so many teams for that to happen – beginning with Alabama – that we're still a few weeks away from taking that one seriously.

• SORRY, ACC IS NO LONGER BCS-COMPATIBLE. Florida State still sticks out like a sore thumb among plausible contenders, because the computers still refuse to respect the Noles' dodgy strength of schedule. Even if FSU was to win out in the ACC, beat Florida in the regular season finale and crush the Coastal Division champ in the ACC title game, the chasm between the human polls and the computers at the moment is so wide it would probably require every single team in front of Florida State right now losing to close – some of them twice.

• FOR CHAOS' SAKE. There is still no more chaotic scenario than three or four major teams running the table, especially when it comes with the prospect of an undefeated Notre Dame or undefeated Big 12 champion (or both) being left in the cold. And that's without even taking into account poor, neglected Louisville lurking around the fringes of the top ten on behalf of the Big East. But November is where the fun starts: Based on all available precedent, the only reliable assumption at this point is that almost all of our standing assumptions are about to go up in smoke, one by one, some of them in ways we've never even contemplated. If it's not Kansas State or Notre Dame gumming up the works, there are still plenty of candidates willing and able to take their place. (LSU, we're all looking at you...)