Notre Dame 30, Oklahoma 13: Breaking through, by the book

Share All sharing options for: Notre Dame 30, Oklahoma 13: Breaking through, by the book

Notre Dame 30, Oklahoma 13.
- - -
1. First, the style. Not that the Fighting Irish had exactly written the book on "style points" over the first half of the season, but if they had, Saturday night could have served as the thesis statement. Check the boxes as you go:

• Establish the run on offense? Check: Sparked by a quick-strike, 62-yard touchdown sprint by Cierre Wood in the first quarter, the Irish eventually ground out 215 yards and three touchdowns on the ground on 5.5 per carry.

• Stuff the run on defense? Check: The Sooners managed a grand total of 15 yards rushing, including negative sack/gaffe yards (see below), and eventually dropped the pretense of a ground game entirely aside from the obligatory short-yardage appearances by the "Belldozer," Blake Bell. Oklahoma's longest carry of the night covered seven yards.

• Chew clock? Check: After Wood's initial burst, the offense was at its methodical best over the final three quarters. Of Notre Dame's five scoring drives, the first three were all extended marches covering, respectively, 64 yards in 13 plays (for a field goal), 70 yards in 13 plays (touchdown) and 73 yards in seven plays (field goal). Ironically, the most time-consuming drive of the night, a 12-play, 60-yard trek that spanned the first seven minutes of the third quarter, didn't result in any points thanks to a missed field goal. But it did set the tone for the rest of the half, in which Oklahoma held the ball for just ten minutes and only scored once. 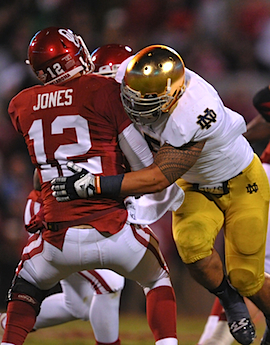 • Bend but don't break? Check: The Sooner offense ventured into Irish territory six times, and into the red zone four times, and came away with fewer points than it had scored at home since September 2005. Landry Jones threw for well over 300 yards on 51 passes, but failed to put one of them in the end zone for the first time this season.

If you've watched a Notre Dame game this season, you could have closed your eyes and played right along with the beat: The Irish won the turnover margin, Manti Te'o was everywhere and the opposing offense was left to thrash about for three hours before it realized that the more it struggled, the tighter the restraints.

2. The substance, on the other hand, is another story altogether. True, the 7-0 start was built on the vanquished corpses of several name-brand victims – Michigan State, Michigan, Miami, Stanford – but none with anywhere near the current national cachet of Oklahoma, the highest-ranked victim on Notre Dame's resumé since the 2005 Irish upset No. 3 Michigan in Charlie Weis' second game as head coach. The Sooners had won their previous three games by a combined 108 points, including a 41-20 rout at Texas Tech and a grisly, 63-21 obliteration of Texas that was not nearly as close as the score suggested. They came into the weekend averaging two more touchdowns per game than anyone the Irish had beaten to date, with the talent and track record (not to mention the double-digit point spread) to back those numbers up. Everything we knew about Notre Dame football over the past two decades pointed to another primetime disappointment.

Instead, we got a solid, fundamentally sound contender that imposed its will on the best team on its schedule, on the road, and left Norman on the short list of viable national contenders. If the style is not quite what Irish fans expected when they hired Brian Kelly, noted up-tempo/spread evangelist, the substance finally is.

It's been a bizarre season for this team, beginning with its narrow escape from UTEP on opening night, and no moment was more bizarre than hearing Brent Musburger quoting obscure Elton John lyrics on national television to capture the trajectory of Landry Jones' career. I'm not really sure how to reconcile the attack that looked so lethargic on Saturday night with the one that reduced Texas to a few wisps of ashes in the wind just a few weeks before, other than to give Notre Dame credit for the difference. (And Kansas State, too, which made the Sooners look equally lifeless back in September.) Jones' numbers have already bought him a place at the top of every major column in the OU record books, but this may have been his last chance to join When Jones faced that day, when he was forced to cross the bridge or fade away …he faded away. He faded away.

4. On the other sideline – and the opposite end of the spectrum, career-wise – it's still much too soon to suggest Everett Golson has crossed the proverbial bridge, especially based on a game in which he barely completed half of his attempts and also didn't throw a touchdown pass. But he didn't turn the ball over in a tough road environment, either, and for the first time looked like the kind of steady, keep-the-chains-moving captain that a defensive-oriented team can trust to make enough plays to win. 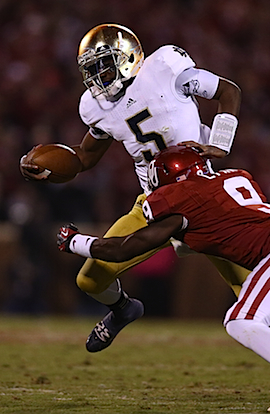 Whether he could turn the same trick against an Alabama or LSU in the BCS Championship Game is an entirely different question, but it's a credit to Golson and to Kelly's sharp, patient play-calling that we're even to the point of asking it.

5. On that note, there is so much more to say about Notre Dame's place in the national championship race after the BCS standings are released on Sunday night – and so much more football left to render it all irrelevant – but in short: I still think the Irish need a break in the form of an Alabama or Oregon loss down the stretch to punch their ticket to Miami. That's out of their hands. In the meantime, though, finishing off a perfect regular season is in their hands, and very much within their grasp: After a two-month gauntlet that's pitted them against four ranked teams in nine weeks – not to mention the dates with Miami and BYU – Notre Dame will be heavily favored to win its next three games against "ACC Row," Pittsburgh, Boston College and Wake Forest.

If they take care of business over that stretch as thoroughly as they have so far, the only thing standing between the Irish and a 12-0 finish is the Nov. 24 finale at USC. And let's just say the Trojans aren't exactly looking bulletproof.