If a sloppy, turnover-marred upset over their undefeated rival didn't confirm the Bulldogs' return to the SEC's elite, it certainly gave them the right to prove it in Atlanta

Share All sharing options for: Georgia 17, Florida 9: Welcome Back, Bulldogs

Georgia 17, Florida 9.
- - -
1. Personally, I've never been one to put a lot of stock in a team's "emotion" or internal motivation, at least in the sense that that sort of thing is almost impossible to gauge from the outside and even harder to connect to actual results. In my eyes, the fact that Georgia's defense spent much of the past week bickering among themselves over who is and is not "soft" and who is and is not giving 100 percent was a sign of infighting and pending doom – mostly because Georgia's defense has looked soft compared to last year's killer unit, as born out by the numbers. If you do believe that performance rises and ebbs according to which side is feeling more disrespected or whatever on a given day, then Softgate probably looks more like a rallying cry. All I'll say for certain is that the Bulldogs looked like an entirely different team Saturday than we've seen in big games over the last five years. 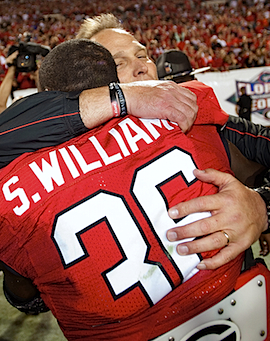 Again, for an ostensibly elite program, Georgia has been terrible in these moments. Prior to Saturday, UGA was 1-9 in its last ten games against top-10 opponents, including the 35-7 debacle at South Carolina just three weeks ago. Only one of those nine losses had come by single digits, against an LSU outfit that wound up finishing nowhere near the top ten in 2009. Since opening at No. 1 in both major polls in 2008, Georgia was 2-15 against teams that landed anywhere in the final polls, and came into the weekend riding a ten-game losing streak in that category. Needless to say, it's been awhile.

2. Validating as it was for Mark Richt and his defense, especially, it's probably also unnecessary to point out just how ugly this game was, even by the proudly rough-and-tumble standards of the SEC. Even more so than last year's end zone-averse slug fests between Alabama and LSU, the Cocktail Party was the epitome of the kind of anti-quarterback clinic fans of more offensively oriented conference love to mock: Between them, the offenses combined for a ghastly nine turnovers, three of them thwarting potential scoring drives literally in the end zone or at the goal line. The quarterbacks, Jeff Driskel and Aaron Murray, were picked off five times and lost multiple fumbles. Florida, which came in with a league-low four giveaways in its first seven games, turned the ball over six times – two more than they forced in last week's turnover-driven blowout over South Carolina. (Don't say you weren't warned about the dangers of living by the fumble, Gator fans.)

In the first quarter alone, Florida's first four possessions resulted in two fumbles, a turnover on downs and a three-and-out/punt; after converting the Gators' first fumble into a quick, short-field score, Georgia's next five possessions in the first half resulted in a fumble, three consecutive interceptions by Murray and a three-and-out/punt. Neither side reached 300 yards of total offense, and neither reached the end zone on a sustained drive.

3. So there was all of that, which at least had the good taste to largely cancel itself out. If you want to boil the afternoon down to a single, defining difference, it's this: Malcolm Mitchell made the big play for Georgia in the fourth quarter…

…and Jordan Reed did not for Florida.

That's not meant as a knock on Reed, who has turned into Florida's most reliable target in the passing game and was busting his ass to save the Gators' undefeated record when he had it knocked from his hands at the last second. His inconsolable reaction on the sideline as Georgia ran out the rest of the clock was a brief but very poignant window into just how much players put into building up to that moment in this game in this season, and how just quickly it can slip away from them.

4. On the other hand, this week's edition of mandatory MUSCHAMPRAGE may be the best of the season, by which I of course I mean the worst.

When Muschamp (or any other coach) flips out on a ref, it is always, 100 percent, guaranteed hilarious, because no matter how red-faced they get – and the redder, the better, from my perspective – coaches ultimately wield no power over officials. The ref is a judge armed with a virtual monopoly on the law of the land. When a coach blows his stack over a call, he's the tragic/comic everyman raging against the IRS and the goddamn traffic and the other injustices of the universe that he is utterly impotent to influence. He can sputter and rage, and that's all he can do. 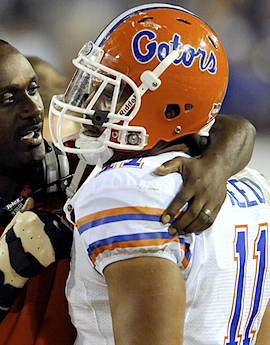 When a coach turns that rage on a player, on the other hand – especially in public, in view of teammates and (in this case) national television cameras – the power dynamic changes entirely in a way that is always more off-putting to me than funny. Besides the fact that he's an adult, a ref can always ignore the raving, or penalize it, or stop it altogether by banishing the coach from the sideline. A player has none of those options, and if he tries to stick up for himself or offer some sort of rational explanation for whatever has gone wrong in the face of the all-consuming anger on display here, he's opening himself up to the consequences of insubordination and who knows what else. He's entirely submissive to a coach who controls his playing time, scholarship and to some extent, his reputation and future.

It's such a strange, authoritarian bubble that coaches live in that allows them (and pretty much them alone) to interact with other people this way in full public view. But maybe that's just why the rest of us aren't making $2.75 million a year.

5. Florida came into this game hoping to clinch the East Division and a return to the SEC Championship Game after two years in the wilderness. Instead, it's Georgia that emerges in control of its own destiny down the stretch: If they avoid an unthinkable stumble against Ole Miss (in Athens) and Auburn (at Auburn, or what's left of it) over the next two weeks, the Bulldogs are back to Atlanta for the second year in a row against (presumably) the winner of next week's "Night of the Crimson Tiger" showdown between Alabama and LSU. Unlike last year, they'll go into that game with a big, validating win that finally clears away four years' worth of accumulated disappointments; with enough help in the BCS standings – and they certainly got plenty of it on Saturday – they may also go in with the national championship within their grasp.

Frankly, given the obvious issues on offense Saturday and the proximity to the wipeout loss at South Carolina, I still don't think of the Bulldogs in that class of teams. But if they do what they're supposed to do over the next month, they have certainly earned the right to prove it in Atlanta.