Reaction Time: In which Texas turns back the wrong clock

Share All sharing options for: Reaction Time: In which Texas turns back the wrong clock

1. Texas 21, Kansas 17. First, the good news: Texas' much maligned, highly flammable defense held an opposing Big 12 offense under 20 points, on a paltry 39 yards passing. The bad news: That offense belonged Kansas, which racked up more points and more yards rushing (234) than it has in any of its last seven conference games, and did it with a redshirt freshman quarterback, Michael Cummings, making his just second career start. The Jayhawks were tied or ahead for the vast majority of this game, and came within 12 seconds of snapping their two-year, 16-game Big 12 losing streak, just one week after being crushed at Oklahoma, 52-7.

The last Big 12 coach to lose to Kansas, Dan Hawkins, was fired the next day and never led Colorado on the field again. Texas fans only feel like they lost, but given how far the Longhorns have fallen over the last month – remember, on Oct. 1, this was a borderline top-10 team – more than a few of them are going to spend the next week suggesting Mack Brown join him.

Obviously, there's a lot more at play there than a couple of too-close-for-comfort wins over traditional doormats. At this point, a year-and-a-half removed from the Great Collapse of 2010, the program is almost aggressively defying progress. Before today, that was most evident in the defense, which had given up as many points in its first four conference games (197) as the 2009 conference champs allowed in the entire regular season. Today, the stagnation was personified by sophomore quarterback David Ash, who seems to have regressed 12 months in three weeks. Less than a month ago, Ash was looking like an entrenched vet in the course of leading a come-from-behind win at Oklahoma State, one week after bombing Ole Miss for a career-high 326 yards and four touchdowns. After spending his freshman year playing musical chairs with Case McCoy for the starting job, there was zero doubt in Austin that Ash was the guy for the long haul.

Today, Ash led the offense to one touchdown on its first possession of the game, and spent the next two-and-a-half quarters being sucked into a black hole: UT's next eight possessions resulted in four punts, two interceptions, a fumble and a turnover on downs, when Kansas stuffed a run up the middle on 4th-and-goal from the one. (Texas was only on the one thanks to a muffed punt by the Jayhawks.) In the fourth quarter, it was finally McCoy who delivered an instant spark off the bench, marching the offense on consecutive touchdown drives covering 84 and 70 yards. The latter featuring a must-have, 4th-and-6 conversion and the game-winning lob to D.J. Grant with 12 seconds to go, eerily mirroring Ash's game-winning march at Oklahoma State. Twenty-eight days later, the quarterback situation is unsettled, the defense is hanging on for dear life and the ongoing rebuilding project is in the same place it was in November 2011, stuck in neutral.

2. South Carolina 38, Tennessee 35. The Gamecocks racked up 510 yards of total offense in this game, significantly more than they managed against any of the first six SEC defenses they've faced this season, and significantly more than they gained the last two weeks combined in losses to LSU and Florida. They also did it without their best player for the last two-and-a-half quarters. What did you expect? At some point in the last seven days the Gamecocks obviously acquired The Force from one of the Palmetto State's many notable Jedis, and used it accordingly:

Actually, it was pretty much exactly what Tennessee fans have come to expect: The Gamecocks' gains in terms of points, yards and yards per play all came in below the average yields in the Vols' first four SEC losses. For the faction of the fan base counting down the days (and counting up the dollars) until Derek Dooley is led to the guillotine, the predictability is precisely the point.

Fortunately for Dooley, the notoriously friendly November schedule – Troy, Missouri, at Vanderbilt, Kentucky – gives him a fighting chance to get the Vols back above .500 and back into a bowl game. It also gives him a chance to succumb to the horrible defeat that will relegate Tennessee to its third consecutive losing season and end all doubt.

3. Indiana 31, Illinois 17. I'm not sure the mileage from Champaign, Ill., to the nearest point on the East Coast, but I suggest Tim Beckman go ahead and batten down the hatches, anyway, with the inevitable hurricane of scorn bound for his house after losing Homecoming by double digits to a team that came in riding an 11-game conference losing streak. In fact, after dropping their last six in 2010, the Illini are on the verge of matching that skid themselves next week at Ohio State. Which, obviously, is going to be a bloodbath: Illinois' four Big Ten losses have come by an average margin of 26 points, on the heels of lopsided non-conference losses at the hands of Arizona State (45-14) and Louisiana Tech (52-24) by a combined 59 points.

Remember: Mediocre as they were, the Illini did play in (and win) bowl games in both 2010 and 2011, finishing a game above .500 both years .Even Ron Zook is embarrassed to have his name associated with this debacle. 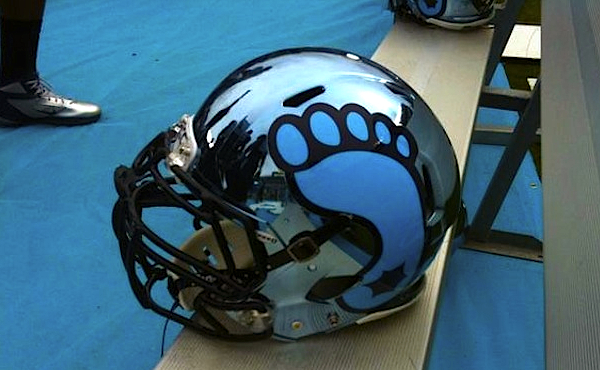 No he's not! Yes he is! He totally is. Tar Heels win, as dictated by the football fashion gods.

5. Northwestern 28, Iowa 17. The Wildcats racked up 349 yards rushing, clinched a winning season and kept themselves theoretically alive to play for the Big Ten title. More importantly, though, the win produced this picture: 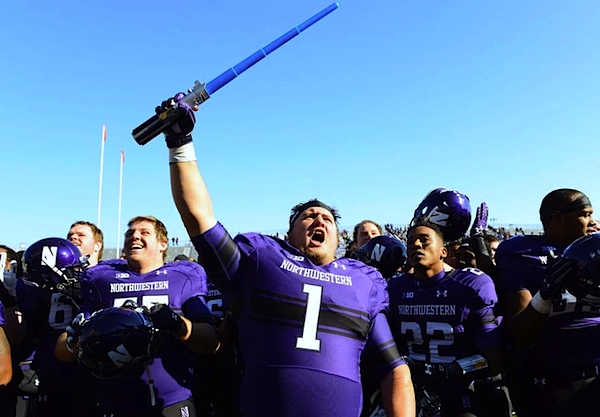 According to the Wildcats' online roster, that's fifth-year senior Bo Cisek, an "unselfish walk-on" who does in fact wear No. 1 despite being a 290-pound defensive lineman. Any more information would just ruin this for everyone.