The best running back in college football was carted off the field with another apparent knee injury, with his future flashing before his eyes.

I'm not a doctor, and I'm not going to make any attempt to diagnose the apparent knee injury that knocked Marcus Lattimore out of South Carolina's ongoing romp over Tennessee, or what it means for Lattimore's future as a Gamecock, or for his long-term future in football, generally. All indications from Columbia suggest the worst, beginning with the obvious grisliness of the injury itself, coming almost exactly a year after he sustained a severe injury to his other knee. But I've been wrong enough before about the severity of ugly injuries to know how premature instant, emotional reactions can be. 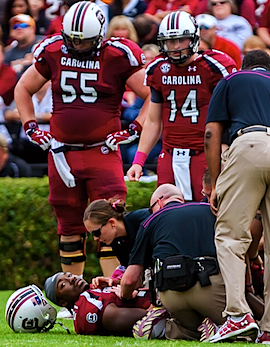 Still, "emotional" barely begins to describe the scene when one of the strongest, most able physical specimens on the planet has to be driven away from his teammates on a cart, his face hidden behind a towel, barely concealing visible sobs en route to learning his new fate. In Lattimore's case, specifically, the undercurrent of dread is inevitable on multiple levels. Some of them are purely practical, for his sake: If he has suffered another major injury, is it still possible for him to return to something approximating full speed? If it is, how willing will an NFL team be to give him a chance to prove it? If he works hard, rehabs the knee (again), returns to school next year as a senior and doesn't look like his old, hard-charging self, what then? Though the production says otherwise, an awful lot of people who watched Lattimore over the first half of this season were convinced he'd already lost a step.

The really depressing thing, though, is the simple thought that we will never get to see one of the best in the world at what he does at his very best. Right from the beginning, Lattimore had the elusive, Herculean "It" factor that validated the blue-chip recruiting hype – his first game against an SEC defense resulted in 37 touches for 182 yards, two touchdowns and 29 broken tackles in a win over Georgia, and even that stat line didn't quite capture the reality to anyone who actually watched it. As a freshman, Lattimore may have been the best running back in college football; if not, he was certainly the most valuable in the course of South Carolina's run to its first SEC East title, delivering a workhorse effort in the Gamecocks' biggest games at least on par with Adrian Peterson's outrageous freshman turn at Oklahoma. Whatever happens from here, there is a very realistic chance now that the Marcus Lattimore of 2010 is the best we'll ever see.

Again, nothing is inevitable. It is still possible today for South Carolina's worst fears to be proven wrong, and for Marcus Lattimore to return to full speed and eventually become the multimillion-dollar cornerstone he was born to be. But short of a debilitating spinal injury, watching a great athlete being carted off the field with his future flashing in front his eyes is as bad as sports get.