Share All sharing options for: Game Day Keys: Mississippi State banks on its shutdown corner, and Saturday's other essential players

Let's go ahead and dispense with the pretense that Mississippi State has any chance of making headway against Alabama's defense: Bama is leading the nation in every major defensive category, again, with six new starters in place of departed draft picks, which is just Bama being Bama. The really frightening thing about this edition of the Crimson Tide? On top of the typically bruising ground game, they're leading the nation in pass efficiency on offense, too, which just unfair. Quarterback A.J. McCarron is of two full-time starters nationally who has yet to throw an interception, and was last seen bombing Tennessee for four touchdown passes in the first 300-yard passing day of his career. His top three receivers, Amari Cooper, Kenny Bell and Kevin Norwood, all average more than 15 yards per catch, and all have touchdown receptions this season in excess of 40 yards. (Remember when the absence of a reliable deep threat was supposed to be the one weakness on this team?)

Banks is the best man-to-man cover corner Alabama has seen, by far, and if he's as good as the draftniks think, may be the closest thing Mississippi State has to an actual advantage on either side of the ball. Of course, he can't cover everyone. But if the Bulldogs have any chance at all of turning their trip to Tuscaloosa into the kind of low-scoring, defensive slugfest that can be turned with a big play or two, it starts with Banks taking away the Tide's emerging downfield game. If he wants to supply one of the big plays by ending McCarron's interception streak, too, well, that will be just fine.

Late-breaking word out of Oklahoma Friday night confirmed that Notre Dame is playing tonight without its best big-play threat, tailback/return man George Atkinson III, who didn't make the trip to Norman due to "flu-like symptoms." Minus Atkinson, the Irish don't have anyone resembling a home-run hitter on offense or in the return game. But they do have the huge, improbably athletic Eifert, who hasn't been targeted nearly enough – only 19 catches in seven games – but remains a matchup nightmare: Too athletic for linebackers and safeties in the middle of the field, too big for cornerbacks in the red zone. 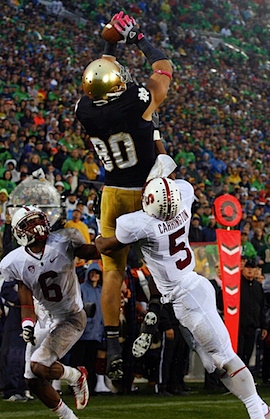 For the season, Eifert averages 16.8 yards per catch, best among the Irish's regular rotation of receivers, and may be the only thing stopping the Sooners from stacking nine defenders in the box against the run. But only if Notre Dame makes them.

Davis has already played a major role in the demise of one Heisman campaign, having led the charge in the 49-14 ambush of West Virginia on Oct. 13 that sent the Mountaineers and quarterback Geno Smith into an ongoing death spiral. He was the top tackler again last week in the Red Raiders' triple-overtime win at TCU, where he also added his third interception of the year. (On his personal blog, Davis called the win "one of the most emotionally and physically exhausting games I have been a part of.") Today against Kansas State, he'll be the lynchpin against the Wildcats' option and play-action attacks. If he can out-grit the nation's reigning King of Grit, Collin Klein, Texas Tech is suddenly at the front of the pack as the Big 12 race hits the stretch.

TCU's trip to Oklahoma State may as well be renamed the "Attrition Bowl": Both teams are missing at least a half-dozen starters to injuries, suspensions and legal issues, a list that includes both starting quarterbacks, TCU's top two running backs, four of Oklahoma State's top wide receivers and multiple veterans along the line of scrimmage. The biggest name in the latter group is the Horned Frogs' top pass rusher, Stansly Maponga, a preseason All-Big 12 pick who will likely be benched for the second week in a row by a foot injury.

In his place, the Frogs have Fields, a true freshman who's emerged as a legitimate terror in his own right: Already, he's tied for fifth nationally with eight sacks, and easily leads the Big 12 in tackles for loss; he's recorded at least two stops behind the line in three of the last four games. Prolific as Oklahoma State remains offensively – the Cowboys still rank No. 1 nationally in total offense – the revolving door at quarterback is proof in itself that OSU is more vulnerable to pressure than it's been in the past, and can't survive much more of it.

Linebacker looked like a strength for the Buckeyes coming into the season, but has turned out to be anything but: At midseason, OSU is leaning heavily on a converted fullback and a handful of freshmen while being pushed to the brink by the likes of California, Indiana and Purdue. The only constant in the starting lineup has been Shazier, a sophomore who has been maddeningly inconsistent despite leading the team in tackles by a wide margin. Penn State is not an explosive offense, by any means, but the Lions are significantly better on that side than the team that beat Ohio State in Columbus in 2011, and they're more than capable of stringing together long drives that keep the Buckeyes on the field – and Braxton Miller on the sideline – for long stretches of time if Shazier and his makeshift cohorts can't get them off.