Even the optimists remain wary of Notre Dame with high expectations. But make no mistake: If Notre Dame beats Oklahoma, at Oklahoma? There will be no holding back the hype.

1. I may be in the minority – hell, given the subject, I'm sure I am – but as far as I'm concerned, the most surprising part of Notre Dame's 7-0 start is how anticlimactic it's been. After two decades of false starts and frustration, I was under the impression that nostalgists, opportunists and sentimental suckers would attack the "Return to Glory" meme like roaming packs of those tiny little dinosaurs in Jurassic Park 2 at the first hint of a stirring echo. (It's not like it would be the first time.) But aside from an Oct. 13 visit from the GameDay set and that one Sports Illustrated cover featuring Manti Te'o, the hype seems (to me, anyway) relatively muted: The mainstream polls have resisted runaway optimism, relegating the Irish to the back of the pack of serious, undefeated contenders at No. 5, and no one seems particularly anxious to argue otherwise. Even the Te'o SI cover was regional, and focused more on him personally than on the team's chances of breaking the nearly 25-year championship drought.

One reason for that, I think, is that all the "WAKE UP THE ECHOES" clichés have been so relentlessly mocked over the past decade or so, and Notre Dame has been so consistently disappointing when faced with high expectations, that even the suckers are a little wary. There's also the fact that this is a low-scoring, defensively driven team that isn't racking up a lot of impressive blowouts, and just escaped an upset bid a couple weeks back by the hair of its chin. 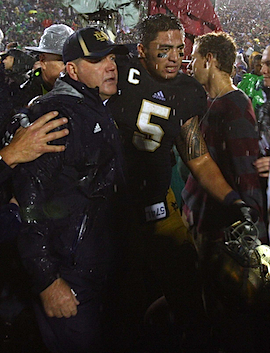 And then there's the schedule: Even as the season has progressed, and the wins have piled up, even the most reverent optimist, the guys who really believe, have a hard time bringing themselves to make the leap of faith necessary to imagine this offense keeping pace at Oklahoma. So do the oddsmakers, who watched the Sooners crumble at home against a tough, defensively driven team from Kansas State in September and still installed the Sooners as double-digit favorites. With so much disappointment in the past, and so much football still to be played in 2012, I don't think anyone is quite willing to trust this team yet.

But make no mistake: If Notre Dame beats Oklahoma, at Oklahoma, with only a trio of ACC patsies and a trip to USC remaining between the Irish and a perfect regular season? There will be no holding back the hype. And for once, there probably shouldn't be.

2. Aside from quarterback (see below), the glaring issue on Notre Dame's depth chart at the start was obviously the inexperienced, makeshift secondary, especially after cornerback Lo Wood bit the dust with a torn Achilles in August; a few weeks later, another Achilles injury claimed the only returning starter from 2011, Jamoris Slaughter. That left a pair of converted wide receivers starting for the first time at safety (Matthias Farley) and one of the corners (Bennett Jackson), opposite a true freshman (KeiVarae Russell) at the other. And pretty much any way you slice it, they've held up just fine. Just fine.

In fact, they've been much better than fine when it comes to limiting big plays: Of the 223 passes that have actually left opposing quarterbacks' hands, only two have gone for more than 30 yards, none have gone for 50 and just five have gone for touchdowns. The only possible caveat to numbers like that is that virtually all of the offenses the Irish have faced – Navy, Purdue, Michigan State, Michigan, Stanford, BYU – are all either run-oriented or (in Purdue's case) reliant on short, quick passes, and don't possess the personnel or the mindset to consistently stretch a good secondary downfield. And the one exception in the lot, Miami, didn't just stretch the Irish, but actually burned them on a couple of occasions, which the Hurricanes (being the Hurricanes) subsequently flubbed without external assistance:

The 'Canes had no fewer than seven drops in that game, including at least two touchdowns by Phillip Dorsett you can see at the start of that clip, which may or may not have had anything to do with the outcome of that game, a 41-3 blowout. But people who have actually watched Notre Dame's secondary do not have quite the confidence in the back four that the numbers would suggest.

3. On the other hand, those same people have a fairly unshakeable confidence in the front seven, where the Irish have their clearest (if not their only) advantage against Oklahoma's banged-up, rebuilt offensive line. Before the season even began, the Sooners were besieged by injuries and attrition up front, ultimately costing them a pair of veteran starters for the season and a probable starter from the juco ranks. Against UTEP in the opener and Kansas State in their only loss, the subtraction was obvious. Not so much against Texas Tech and Texas, a pair of convincing wins on the other side of a late September bye week that seem to have restored Oklahoma's mojo coming off the loss to K-State. Kansas barely touched Landry Jones last week. 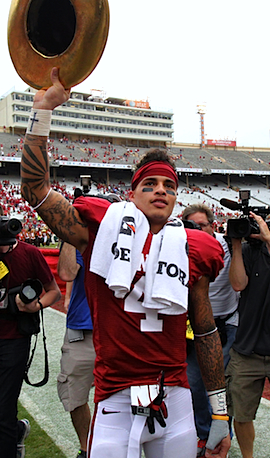 Obviously, Notre Dame is not Kansas. But if they want to avoid being skinned alive by Jones like Texas was two weeks ago – Texas, home to two of the best bookend pass rushers in college football – the Irish will have to make him as uncomfortable in the pocket as he was in the course of committing two key turnovers against K-State. In that sense, Notre Dame's best player against the pass is a 6'6", 305-pound lineman, Stephon Tuitt, whose size only makes his presence among the most productive pass rushers in the nation that much more terrifying.

4. On the other end of that equation, of course, there's Oklahoma's wide receivers, who are plentiful and talented, but also – aside from the leader of the pack, steady junior Kenny Stills – are basically still finding their footing in the system. As a group, it's just so new: Of the seven receivers who have caught at least one pass for Oklahoma, five of them are in their first year on the roster, including three true freshmen (Sterling Shepard, Trey Metoyer and Durron Neal) and two quality transfers, Justin Brown and Jalen Saunders, who both arrived with proven production from Penn State and Fresno State, respectively. The top receivers at tight end (Brannon Green) and out of the backfield (Damien Williams) are both new arrivals from junior college. Along with juco transfer Lacoltan Bester, those seven players have accounted for 80 of the team's 141 receptions and nearly half of its total yards from scrimmage.

They have not, however, accounted for many big plays: As a team, the Sooners have connected on fewer completions covering at least 30 yards than any offense in the conference except Kansas, which is Kansas. The only somewhat reliable big-play spark offensively has been Damien Williams, who's been good for about one really big play per game, the biggest coming on a 95-yard touchdown sprint against Texas that officially commenced the Longhorn meltdown. If that happens against Notre Dame, and the Irish have to commit a safety to stopping the run, their perfect season is cooked. But nothing like that has happened against Notre Dame.

5. Predictions…
• After one especially profane, red-faced encounter with a player, ABC's hi-def cameras will catch the fleeting outline of a bespectacled, lisping demon exiting Brian Kelly's body via his mouth.

• Damien Williams breaks free for a long touchdown run in the first quarter, the first rushing touchdown of the season against the Notre Dame defense, but the Sooners fail to mount any consistency on the ground over the next three quarters.

• Everett Golson makes it through the first half with no apparent effects of the concussion that kept him out of last week's win over BYU, but yields to Tommy Rees for the entire fourth quarter with the Irish trailing. Kelly continues to insist after the game that there is no controversy and Golson is the starter.

• Oklahoma's defense scores a touchdown or sets up a gimme off a Notre Dame turnover.