1. Thesis question: Right now, twelve years into Mark Richt's tenure, three-quarters of the way through the 2012 season, what is Georgia?

From what I gather, this is the question Georgia fans have been asking themselves on a weekly basis – daily, once the calendar turns to October – for the better part of the past five years, with increasingly disappointing answers when there have been answers at all. For a few of those years, the sinking feeling naturally followed the sinking record, from 11 wins in 2007 to ten in 2008, when the Bulldogs began the season ranked No. 1 in both major polls, and so on through the first losing season in more than a decade in 2010. Last year brought a turnaround on paper, just in time to send back the tide of discontent threatening to wash Richt out of a job, but not necessarily in the bigger picture: The long-awaited division crown came on the strength (or lack thereof) of the most forgiving schedule the SEC could conceivably offer, bookended by a pair of back-to-back defeats against the best teams on it.

Those four losses said at least as much about the state of an ostensibly elite program as the ten wins in between. The Bulldogs' only loss this season, a 35-7 debacle at South Carolina, only added the exclamation point. Since the '08 team opened atop the preseason polls, Georgia is 1-9 against top-ten opponents, losing by an average margin of 18 points per game. Including the most recent flop in Columbia, four of those nine defeats have come by at least 24 points; only one, a 20-13 nail-biter against LSU in 2009, was decided by single digits, and that edition of LSU wound up nowhere near the top ten after finishing just 4-4 from that point on. Over the same four-year span, Georgia is just 2-14 against teams that landed anywhere in the final polls, and entered this season riding a nine-game losing streak in that category. Assuming the Gamecocks are on their way to a ranked finish (still a safe assumption despite consecutive Carolina losses at LSU and Florida), that streak is now at ten, and counting. 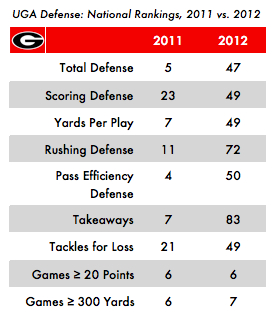 2. Objectively speaking, then, the Bulldogs are 6-1, ranked in the top ten of the current BCS standings themselves and still control their own destiny re: division and conference championships. Given the conference, they're still very much in the running for the mythical national championship. Two-thirds of the way through the regular season, every larger goal is still in front of them, and talent-wise, within their reach. But even among the team itself, the internal focus leading up to the defining, do-or-die Saturday of the year is over who is "soft" and who is not, who deserves to be playing and who does not, who is giving 100 percent and who is fighting back when the defense gets "punched in the mouth," etc., all of it unfolding in unusually – almost suspiciously – unvarnished, public fashion.

To an awful lot of people both in the program and watching it closely, this conversation seems so overdue that it's less a case of worrisome infighting than it is a much-needed catharsis and/or challenge. Obviously, the defense is in dire need of some kind of wake-up call: Through seven games, essentially the same unit that finished fifth nationally in total defense in 2011 ranks eighth in the conference in scoring defense, ninth in total defense, ninth in takeaways, tenth against the run and twelfth in sacks. Opposing offenses have put up at least 20 points in six of seven games, and easily toped 300 yards of total offense in all seven, including visits from Buffalo, Florida Atlantic and Vanderbilt and last week's too-close-for-comfort win at Kentucky. South Carolina pounded out 230 yards on the ground and 162 more on just six completed passes. For a unit that returned a dozen veteran, mostly blue-chip starters from one of the best defenses in the country, and clearly has not lived up to that standard, an identity crisis just ahead of the game that will most define that identity is inevitable.

3. Florida arrives at the Cocktail Party in almost the exact opposite state of mind: Surging confidently on the heels of validating, defensively driven wins over LSU and South Carolina, and seemingly not very concerned with the anemic offensive box score in last week's romp over the Gamecocks. Shockingly, dropping 44 points on a team that had been giving up 12 per game coming in does have a tendency to anesthetize concerns about the offense, even when the vast majority of those points came gift-wrapped courtesy of the defense, special teams and butterfingery assistance from the opposing offense. 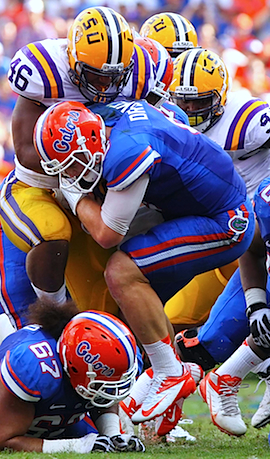 But against the cream of the schedule to date, Texas A&M, LSU and now South Carolina, the Gator offense as a whole does not seem to have come all that far from the attack that failed to score more than one touchdown last year in any of its six losses, and managed just 226 yards in the loss to Georgia. In fact, in terms of moving the ball consistently, it may be further behind the curve, limping out of last weekend ranked 100th in total offense, 114th in passing and 105th in sacks allowed. In essentially the same number of snaps, the Bulldogs are averaging 130 more yards per game than Florida and have generated almost twice as many big plays. Tailback Mike Gillislee has established himself as a reliable workhorse of the sort Florida has been missing for a long time, but at this point, the Gators are entirely lacking in explosive playmakers.

4. The saving grace of the offense to date is its dramatic improvement when it comes to taking care of the ball. Of course the defense has a lot to do with that, but dramatic is not an overstatement. Last year, the Gators turned it over 26 times, finished in the red in nine of 13 games and wound up with worst turnover margin in the conference. This year: Florida has a league-low four giveaways – only one via interception – and has finished in the black in every game.

In that context, sophomore quarterback Jeff Driskel has been only slightly more efficient that his beleaguered predecessor, John Brantley, and surprisingly much less productive in terms of yards, yards per pass, big plays, etc. But Driskel has only been picked off once in the first seven games, and in general (with a notable exception or two) he's at least proven himself in the "manager" role, i.e. a guy who won't put the defense in any death-defying positions and will turn short-field opportunities into touchdowns. (Combined, Driskel's four scoring passes against South Carolina covered a grand total of 23 yards; all six Florida touchdown "drives" covered just 146 yards.) At this still-early point in his development, he's a perfect "punting is winning" kind of quarterback, which is perfectly fine as long as his team continues to boast a top-five defense and leads the nation in net punting.

5. Predictions...
• The return of Jarvis Jones will have an immediate, obvious impact on Georgia's defense.
• Georgia moves the ball early, driving for a first quarter touchdown, but will also be forced to settle for a field goal it will later regret after the offense hits an extended drought in the second half.
• The Gators break a big play in the return game for the second year in a row.
• The enigmatic Trey Burton will make a semi-regular appearance in the end zone. Since his freshman year, Florid is 9-1 when Burton scores a touchdown, and 13-10 when he doesn't.
• Florida wins, 23-16.