AROUND THE SCORN: Adding up the cost of subtracting Derek Dooley from Tennessee

Buyout math begins in earnest in Knoxville, Ohio State's defense tries to stop the bleeding and Charlie Weis doubles down on the youth movement at Kansas, all in today's roundup.

Share All sharing options for: AROUND THE SCORN: Adding up the cost of subtracting Derek Dooley from Tennessee

• ANOTHER LONG OCTOBER. Tennessee is 0-4 in SEC play with South Carolina heavily favored to make it 0-5 on Saturday, and the Derek Dooley Hot Seat Watch has officially entered one of the advanced stages of development: The one where local scribes start adding up how much it will cost to fire Dooley and the rest of his staff.

If Tennessee athletic director Dave Hart decides to change directions in the football program after this season, the move won't be cheap.

UT would have to pay at least $5.6 million, and perhaps as much as $9.3 million, over the next four years to buy out Derek Dooley and his coaching staff, according to an analysis of employment contracts by the News Sentinel.

All but one of Dooley's nine on-field assistants are working under multiyear contracts, including defensive coordinator Sal Sunseri, Tennessee's highest-paid assistant. But the payouts to fired coaches could vary based on how quickly they find other employment and how much they are paid in their new jobs. 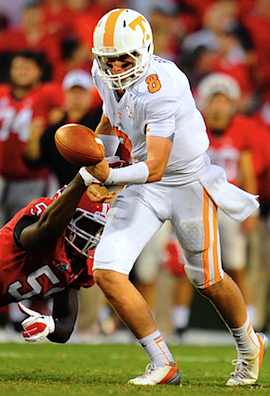 Elsewhere on the beat, another writer draws parallels between Dooley and two of his predecessors, Johnny Majors and Phil Fulmer, both of whom were led to the guillotine at roughly this point on the calendar on the heels of disappointing losses to South Carolina – the none-too-subtle implication, of course, being that Dooley could be next on the Gamecocks' hit list with another flop this weekend in Columbia. In two-and-a-half seasons, Dooley is 4-16 in conference games, including losses in eleven of the last twelve dating back to last year. (The one exception in that span: A 27-21 squeaker against Vanderbilt, in overtime, one week before the Vols were doomed to another losing record by their first loss to Kentucky in like a thousand years.) Against ranked teams, Dooley is 0-14, all but two of those losses coming by double digits.

With Lane Kiffin long gone and one of the most veteran lineups in the nation at his disposal, the only thing Dooley really has going for him is that he's not making any excuses for himself or his players:

"Man up, that's what you have to do," Dooley continued. "That's life. You can't have it both ways. I told the team that. Can't get upset at the fans because they're angry. What do you want them to be, happy?

"They all want to get cheered, but nobody wants the criticism when you don't perform. That's not how life is. Nothing wrong with the fans."

That was the coach's advice to his perpetually maddening quarterback, Tyler Bray, after Bray skipped out on interviews following last weekend's wipeout at the hands of Alabama. But he

• THINGS THAT EXIST, PART ONE. This perfect gif, after (apparently bogus) reports that the Cleveland Browns have designs on targeting Nick Saban as their next head coach.

• CAUTION: CONTENTS MAY BE FLAMMABLE. Remember a couple weeks back when Ohio State crushed Nebraska, 63-38, to move to 6-0, and a couple articles started trickling out about the Buckeyes' stated goal of winning the Associated Press championship despite the ban in the Coaches' Poll/BCS? In the meantime, OSU has a) Squeaked out a three-point win at Indiana in which it yielded 481 yards and 49 points to the Hoosiers and found itself so thin at linebacker that its leading tackler was an emergency convert from fullback; and b) Squeaked out an overtime win over Purdue in which it was already trailing when its starting quarterback was knocked out of the game.

Even before the Nebraska game, OSU had only narrowly escaped an upset bid from Cal, legitimately struggled with UAB until well into the fourth quarter and only beat a really mediocre-looking edition of Michigan State by one point. The defense has had major breakdowns in every game, beginning last week on the first play from scrimmage:

Coach Urban Meyer vowed after a 52-49 win at Indiana that the gashes were about to stop. He stepped into the defensive coaches’ meetings and said that a plan had been hatched.

Then came Purdue's first offensive play last Saturday. The Buckeyes knew the Boilermakers liked to run a certain passing route with their running back and were ready for it. Except Purdue modified it and sent two backs on routes up the field, with Akeem Shavers having no one in front of him as he caught a pass and sprinted to the end zone for an 83-yard touchdown.

"It's the worst feeling," cornerback Travis Howard said. "Not too many games start off like that."

Especially a game in which the whole defense had taken a vow to smash the gash.

By the Columbus Dispatch's count, that was one of eleven plays that's gone for at least 40 yards against Ohio State in the first eight games, most in the Big Ten and one more than the 2011 Buckeyes – easily the most generous OSU defense in years – gave up in all 13 games. At the moment, the 2012 defense is yielding roughly 70 yards and 3.3 points per game more than last year's edition with three of the best offenses on the schedule (Penn State, Wisconsin and Michigan) still to come over down the stretch, beginning with Saturday's trip to Happy Valley. To some extent, that shapes up as a battle of easily resistible force vs. imminently movable object: Although Penn State is vastly improved on the scoreboard under the watch of first-year boss Bill O'Brien – the Lions have topped last year's season-high against FBS defenses, 34 points, in all three Big Ten games – the attack as a whole remains the least explosive in the conference.

"We all know what's ahead, I don't even need to say anything about it," Georgia coach Mark Richt told his players in the locker room after Saturday's game [at Kentucky]… "I want you all to get as much rest as you can get, get your minds right, get your hearts right. It's going to be a war in Jacksonville. … Just get ready. Coaches will be getting ready. I want y'all to get ready. You leaders, I want you to think about what this game means. You've been talking about it all offseason since January. 'Our team, our time, no regrets.' Well, here we are. We're at the moment of truth."

Will Muschamp? He's not about to start laying it on thick, either, although for the exact opposite reason:

"We approach all games the same," Muschamp said on the SEC coaches' teleconference. "I know no one wants to hear that, but that's the way we do it here. When you consistently approach things the same way, you promote consistent performance in your players.

It's not all of a sudden, 'Coach Muschamp thinks this is the most important game.' They all count for one. They're all critical. We know what's at stake. When we go on the practice field Monday, our guys were excited. You don't need to give pep talks this week. They'll be excited to play."

Mark Richt doesn't need to give any "Beat Florida" pep talk because everyone in his locker room has been pointing toward the Cocktail Party as the defining moment of the season for nine months. Will Muschamp doesn't need to give any "Beat Georgia" pep talks because everyone in his locker room takes every game seriously as a matter of course. Sounds to me like they could both take a lesson in old-fashioned motivation from a coach who still knows how to tap into his inner Rockne, Towson University's Rob Ambrose:

…this is a descriptive example of a statement coach Ambrose made following a practice during the week of our game against St. Francis this current season.

In as exact words as possible he stated: "I do not care what your religion is. I do not care if I offend anyone. But even if Jesus and his disciples come in here on Saturday, we are going to fuck them up and get them the fuck out of here."

Of course, to be fair, Florida–Georgia has never evoked the extreme emotions that have come to define Towson–St. Francis. But if you can have your troops mentally prepared to take out their aggression on the King of Kings, some half-assed rival from next door ought to be a piece of cake.

• THINGS THAT EXIST, PART THREE. This old photo, which resurfaced on the same week that Mack Brown responded to mounting impatience over the stalled rebuilding effort at Texas by publicly bitching about the Longhorn Network for taking up too much of his time and giving too much "insider" access to opposing teams. 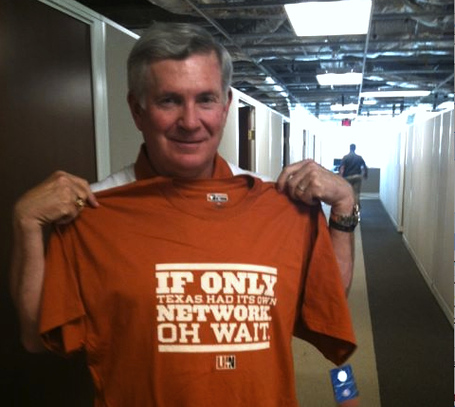 I'll just say this: I live a skip from Texas' campus, and if opponents are making any effort whatsoever to get their eyes on the Longhorn Network, they're the only ones.

• CRIST CAME TO SIT SO THAT KANSAS MAY LIVE. Charlie Weis has been up front for weeks about his long-term plan to sacrifice the rest of Kansas' hopeless 2012 season for the sake of 2013 and beyond, and he doubled down on the investment this week by benching senior quarterback Dayne Crist in favor of a true freshman, Michael Cummings:

Kansas University football coach Charlie Weis on Tuesday removed the "or" between the names of his two starting quarterbacks.
[…]
"We're gonna start Michael and we'll see where it goes," said Weis, choosing not to tip his hand about whether Crist would play at all. "At this point, when you're 1-6 and things haven't gone real well, I think you owe it to your team to see what you got. … My job is to make sure I get our football team in an upward spiral, not a downward spiral. If the status quo doesn't show any improvement, then you have to find some way to make improvements, and this is one of the ways."

Actually, Cummings made his first start in last week's 52-7 debacle at Oklahoma, though Weis pointedly resisted naming either quarterback The Starter going into that game. (Cummings was 10-of-21 passing against the Sooners with two interceptions and no touchdowns; Crist came on briefly to go 3-of-6 for a paltry 13 yards.) But even if he finds the going a little friendlier this week against Texas' rapidly collapsing defense, Cummings is likely on a short-term stopgap himself: Once-touted BYU transfer Jake Heaps is still biding his time on the bench, waiting out his mandatory redshirt year, and is still the favorite to inherit the top job next year.

Quickly… The NCAA won't rule on Central Florida's appeal of a bowl ban until January, at the earliest, meaning UCF can be bowl-eligible this season. … Temple is in negotiations with Hawaii to add a 13th game to the schedule in Honolulu, just a few weeks from now. … Eugene police won't file formal charges against Oregon defensive lineman Isaac Remington for driving under the influence. … All signs point to true freshman Max Tuerk as USC's new starting left tackle. … The final BCS Championship Game will be played on a Monday, after all, as God and Bill Hancock intended. … Nebraska fans will be equipped with black "rally towels" to wave against Michigan. … This story out of Shreveport, La., may be the craziest news report I've ever read, and not in a funny way. … And you know things are going badly when it counts as news that your starting quarterback is not being benched.