Is there anything that could convince pollsters to move another undefeated team ahead of the Crimson Tide?

Regular readers may find this hard to believe, but honestly, I'm not really that interested in banging on about why I think Florida deserves to be ranked ahead of Alabama right now (emphasis on right now) due to the Gators' obviously superior strength of schedule over the first eight weeks. I could complain about the folly of inertia in the polls every single week, and have been for years. My position is the same as always: At this point in the season, the No. 1 ranking should go to the team with the best resumé to date. At the moment, that's Florida, which has three scalps in its trophy case – over LSU, Texas A&M and now South Carolina – more impressive than any acquired so far by Alabama. (The Crimson Tide's best win remains their opening day blowout over Michigan, followed by routine routs over Ole Miss and Western Kentucky.) Obviously there are many others who'd rather defer to Bama's dominance, consistency and blue-chip pedigree over multiple seasons. Fine.

I still find it bizarre that out of 119 voters in the two mainstream polls, only one of them is willing to reward Florida (or Kansas State) for beating clearly better opponents. Not because I disagree with the conclusion that Bama should be No. 1, but because the conclusion is so unanimous in the face of viable alternatives. There's not even a minority faction: It's just Doug Lesmerises of the Cleveland Plain-Dealer, who echoed my resumé-based reasoning Sunday in his explanation for voting the Gators No. 1 on his Associated Press ballot. Otherwise, every single one of the other 118 writers, reporters, coaches and coaches' surrogates in question is in lockstep behind the assumption that Alabama is an immovable object at the top. It reeks of habit at the expense of method. It's almost enough to make you want to awkwardly embrace the BCS computers for keeping an open mind, or mainframe, or whatever. Almost.

Thankfully, Alabama's backloaded schedule is about to kick into gear with undefeated Mississippi State, LSU and Texas A&M on deck over the next three weeks, and the Crimson Tide can claim some quality skins of their own. (It will help if Michigan keeps winning, too.) Eventually, either the Gators or Tide will lose, or they'll get to settle the question on the field in the SEC Championship Game. In the meantime, it would be a good start if we at least acknowledged that the question exists.

• I didn't punish South Carolina or Texas A&M as harshly as most voters for their losses at the hands of Florida and LSU, because hello: They played Florida and LSU. In the Aggies' case, they've taken both the Gators and Tigers into the final rounds after punching themselves out in an initial flurry in the first half; as for the Gamecocks, they pushed LSU to the brink in Baton Rouge, were besieged by key injuries Saturday in Gainesville and still boast an impressive, lopsided win over otherwise unbeaten Georgia. Along with Stanford (big win over USC, down-to-the-wire road loss at Notre Dame), I'm willing to give those teams some credit for holding their own against first-rate opponents over the handful of undefeated outfits that still haven't faced any.

• Actually, the ranks of the unbeaten-but-untested are getting pretty thin, thanks to losses by Louisiana Tech (at the hands of Texas A&M) and Cincinnati (at Toledo) over the past two weeks. That leaves Rutgers and Louisville in the Big East and Mississippi State in the SEC, three teams that have combined for exactly one win over an FBS opponent with a winning record. That will change one way or another for the Bulldogs after this weekend's trip to Tuscaloosa, but if Louisville survives a visit from Cincinnati on Friday night, the Cardinals might roll into the regular season finale at Rutgers with both teams still boasting perfect records, and no one having any idea how good either of them really are.

As for 7-0 Ohio U. of Ohio, just consider the Bobcats' absence this week after a bye an overdue correction. Ohio's 3-0 start in MAC play has come by a grand total of 16 points, at the expense of three teams (UMass, Buffalo and Akron) with a combined 0-20 record against FBS competition.

• After weeks of toiling on the fringes, the Big Ten finally breaks through this week with Michigan, Nebraska and Wisconsin sliding into the bottom of the poll on the heels of solid wins over Michigan State, Northwestern and Minnesota. Their numbers will be reduced by at least one next week with the inevitable exit of the loser of the Wolverine/Cornhusker tilt in Lincoln, while the winner assumes the driver's seat in the Legends Division. Saturday is also Penn State's last, best chance to make a real move against Ohio State, which could lift the Nittany Lions into the polls for the first time this season or ensure their continued exile for the rest of the year. 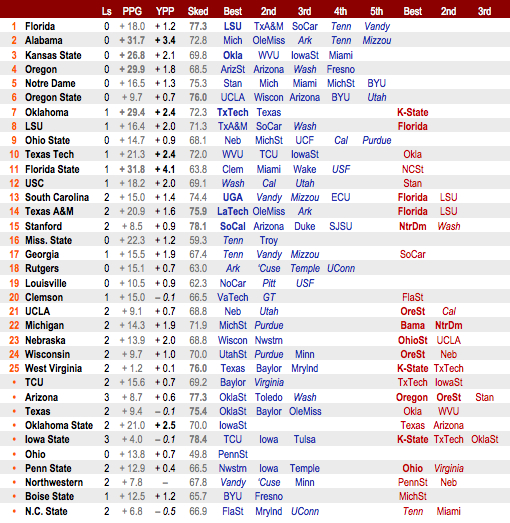