Eastern Michigan beat Army Saturday, 48-38, thus elevating the Eagles from the squalid ranks of teams that have yet to win a game in 2012, of which only two now remain: Massachusetts in the MAC and Southern Miss in Conference USA. For UMass, that's no surprise, given that it's barely halfway through its first season as a full-fledged FBS program. For the Golden Eagles, on the other hand, the descent to 0-7 is an unprecedented disaster.

That's only an exaggeration if you were born prior to the Kennedy administration. The last time Southern Miss was 0-7 was in 1976, when the Golden Eagles lost their first nine before scraping together a pair of wins in their last two games; in the subsequent 35 years prior to this one, USM had never started worse than 0-2, and even then only the once. Since 1994, the Eagles had put together 18 consecutive winning seasons, longer than any other I-A/FBS outfits except Florida, Florida State and Virginia Tech, a span that included five C-USA championships and ten consecutive bowl games. Last year, 2011, resulted in a conference title, a school record for wins (12) and a top-20 finish in the polls.

The trajectory this year, Southern Miss' first under coach Ellis Johnson, has deteriorated almost weekly from "rebuilding" to "disappointing" to "engulfed in flames." Saturday's 59-24 loss at the hands of Marshall – in Hattiesburg – would feel like hitting rock-bottom, if USM hadn't already endured a similar low in September, in a 42-17 humiliation at Western Kentucky. Against Louisville, a former C-USA rival, the Eagles lost in a Biblical deluge. Against Boise State, they lost after committing four turnovers in the first half alone. Against East Carolina, they lost after committing three turnovers on the first three possessions of the second half. At least against Central Florida, they mustered the self-respect to lose in overtime. 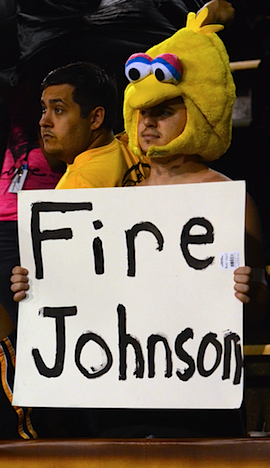 Two months into the season, USM is guaranteed a losing record for the first time in some of its players' lifetimes and currently ranks 100th or worse nationally in total offense, scoring offense, scoring defense, rushing defense, passing offense, pass defense, pass efficiency defense and turnover margin; in offensive pass efficiency, the Eagles rank dead last. Part of that is the result of having an unsettled quarterback situation that has increasingly fallen to a true freshman, and now plans to introduce a fourth face to the rotation for Saturday's visit to Rice. And why not? There's nothing left to play for this year except avoiding the abject humiliation of a goose egg in the win column, and at this rate, Johnson's not going to be around to see any of the growing pains pay off, anyway. Surprisingly, patience does not last long among fans who watch arguably the best team in school history immediately transformed into the worst.

• THE CRIB SHEET: Elsewhere in mid-majordom…
• FLASHES OF GREATNESS™. On the exact opposite side of that divide, there's Kent State, which just beat Western Michigan to move to 4-0 in MAC play, and also became bowl-eligible at 6-1 for just the fourth time in the past 35 years. The Golden Flashes haven't won seven games in a season since 1987, when they finished 7-4 under up-and-coming head coach Glen Mason, and haven't been to a bowl game since coach Don James led a team featuring Nick Saban and Gary Pinkel to the 1972 Tangerine Bowl.

• SLOG AND PONY SHOW. Somehow, SMU managed to record six interceptions off three different Houston quarterbacks last Thursday night in Dallas, and that wasn't even the line of the night: The Mustangs also returned three of those picks for touchdowns, and added a fourth defensive score on a fumble return en route to a ridiculous, 72-42 rout that actually set a new SMU scoring record. Altogether, Houston turned the ball over nine times – six interceptions, three fumbles – in one horrible night, more than 25 other teams have given it away all year. Is there anyone left to fire?

(Just in case you wonkier types were wondering how it's possible for the same team to score 42 points while also committing nine turnovers in the same game, because I was: The Houston-SMU tilt in question featured 30 offensive possessions between both teams, ten of which took less than a minute off the clock. Equally incredible: That number includes SMU's final drive of the night, which burned nearly nine minutes over the course of 15 plays. This may actually top the Houston-Louisiana Tech game in September as Box Score of the Year.)

Right, the "Mister fucking Howdy Doody!" guy. So anyway: On Monday, Christensen was formally suspended by the university for Saturday's game against Boise State and fined $50,000 for the spectacular, obscenity-laced rant he directed at Air Force head coach Troy Calhoun immediately following the Cowboys' 28-27 loss to the Academy on Oct. 13. (Which just so happened to be "Military Appreciation Night" in Laramie, because the universe appreciates irony.) Christensen reportedly worked himself into a frothing rage over his nonsensical conclusion that Air Force quarterback Connor Dietz faked a head injury in order to stop the clock on the play before the Falcons' game-winning touchdown in the fourth quarter… with more than eight minutes remaining in the game… and Air Force sitting on all three timeouts.

But the specifics don't really matter, because even in an alternate timeline in which Christensen is somehow right about Dietz, the sequence in question, a) Had no conclusive effect on the outcome the game, and b) Doesn't begin to justify ambushing the coach of the other team like a pro wrestler beginning to lose his grip on reality. What matters in this case is that an ostensibly responsible adult acted like a dick on the job, and his employer is responding accordingly.

• MID-MAJOR GAME OF THE WEEK: San Diego State 39, Nevada 38 (Overtime).
San Diego State's win in Reno also doubles as the Mid-Major Upset of the Week: Not only did the Aztecs stun the favored Wolf Pack, but they had to do it on the road, facing a 10-point deficit in the fourth quarter, with a backup quarterback off the bench, just to get to overtime. Then it got really interesting, when they decided to let all of it ride on a do-or-die two-point gamble to win. As they used to say, nothing but net.

San Diego State lost senior starter Ryan Katz in the first half (likely for the rest of the season, as it turns out), handing the keys to sophomore understudy Adam Dingwell on his 21st birthday. Initially, that transition went about as well as you'd expect. Down 24-14 in the fourth quarter, though, the light seemed to go on for Dingwell, who led the Aztecs on a scoring drive capped by his first touchdown pass, a 19-yarder to Dominique Sandifer that cut the Wolf Pack's lead to three; after a methodical Nevada response to push the lead back to ten, Dingwell marched SDSU for another answer, this time on his second scoring pass of the quarter with 3:45 to go. After a defensive stop, Dingwell took the reins for one last gasp drive from his own 20, and quickly had the Aztecs in Nevada territory courtesy of three consecutive completions and a pass interference penalty against the Wolf Pack. From there, San Diego State kicker Chance Marden came on to knock home a 35-yard field goal to tie as time expired, booting the game into overtime.

In the first OT session, Nevada scored a touchdown to move ahead 38-31. On its turn with the ball, San Diego State saw that six, and raised the Wolf Pack two:

You should watch that clip, if for no other reason than to hear a play-by-play man quoting Young Jeezy lyrics and an overwhelmed Dingwell tell a reporter, "I couldn't have done it without myself." Now: With the Aztecs suddenly very much in the Mountain West race, can he do it for the rest of the season?
- - -
Honorable Mention: Our old, upset-minded friends at Louisiana-Monroe made a similar calculation in overtime at Western Kentucky, opting for a two-point conversion to win in a game that may ultimately decide the Sun Belt title.

• MID-MAJOR PLAYER OF THE WEEK: Kasey Carrier, RB, New Mexico.
Carrier lived up to his name Saturday with an incredible 338 yards rushing on 8.7 per carry against Air Force, establishing a new Mountain West record and making him the only FBS back this season to crack the 300-yard barrier in a single game. And if for some reason you're skeptical of that number, New Mexico's official YouTube channel went to the trouble of doing the math for you:

Carry No. 32, in particular, is a highlight, resulting in the last of Carrier's three touchdowns – all of them ultimately going for naught in a 28-23 loss that dropped the Lobos to 4-4 under first-year coach Bob Davie. (Remember, before Davie's arrival, this was a team that won three games over its previous three seasons combined.) For the year, Carrier has emerged from the bottom of the depth chart to deliver four 100-yard efforts on the ground in the last five weeks, with 11 touchdowns in the same span.
- - -
Honorable Mention: SMU linebacker Taylor Reed had two of the Mustangs' six interceptions against Houston, one of which he took to the house for the first of their four defensive touchdowns. … And Louisiana Tech freshman Kenneth Dixon racked up 232 yards rushing and six touchdowns on just 17 carries in the Bulldogs' 70-28 obliteration of Idaho, which promptly fired its head coach less than 24 hours later.

A SOMEWHAT ARBITRARY MID-MAJOR TOP 10.
1. OHIO U. of OHIO (7-0). Bobcats took a week off from death-defying escapes by the lower reaches of the MAC: Their last three wins have all come by a touchdown or less against three teams (UMass, Buffalo and Akron) with a combined 0-20 record against FBS competition.
2. TOLEDO (7-1). Upset over previously unbeaten Cincinnati extended the Rockets' winning streak to seven games since they dropped the season opener at Arizona in overtime, and made the possibility of MAC Championship date between Toledo and Ohio that much more tantalizing.
3. BOISE STATE (6-1). Ordinary as these Broncos seem relative to their predecessors, they've still won six straight since the opening night loss at Michigan State and lead the Mountain West in every major defensive category.
4. LOUISIANA TECH (6-1). Bulldogs took out their first loss of the season on poor, defenseless Idaho, to the tune of 70 points and 839 yards of total offense.
5. UTAH STATE (6-2). Aggies' two losses have come by a combined five points at Wisconsin and BYU, and they're still relishing their overtime win over Utah.
6. LOUISIANA-MONROE (5-2). Warhawks' overtime upset at Arkansas remains a high point, but Saturday's overtime win over Western Kentucky will mean more if they go on to win the Sun Belt.
7. NEVADA (6-2). Wolf Pack were caught napping at home by San Diego State, but still have a very realistic shot at winning the Mountain West.
8. TULSA (7-1). Four of Golden Hurricanes' wins on a seven-game streak have come by a touchdown or less, which is not necessarily a ringing endorsement when those wins have come against the likes of UAB, Marshall and Rice.
9. NORTHERN ILLINOIS (7-1). Huskies are yet another outfit on an extended winning streak following a tough opening day loss, in their case an 18-17 heart-breaker against Iowa.
10. CENTRAL FLORIDA (5-2). Golden Knights are 3-0 in C-USA play, atop what is shaping up to be a truly dreadful East Division.
- - -
Honorable Mention: BYU (4-4), Fresno State (5-3), Kent State (6-1), San Jose State (6-2), Western Kentucky (5-2).

Next Week: UAB and Tulane play in front of a crowd of 13 very confused people and UTEP and Houston break the space-time continuum.