AROUND THE SCORN: J.W. Walsh may be too tough for his own good

A surprise injury in Stillwater, an unlikely Auburn hero hangs up his cleats and Idaho kicks off the 2012 coach-hunting season, all in today's roundup

Share All sharing options for: AROUND THE SCORN: J.W. Walsh may be too tough for his own good

• ESCAPE FROM MOSCOW. On Saturday, Idaho yielded 839 yards of total offense in a 70-28 loss at Louisiana Tech, which it turns out is too even for Idaho: On Sunday, the university fired head coach Robb Akey, making the mustachioed, gravel-voiced favorite of bloggers everywhere the first official casualty of the 2012 coach-hunting season. Offensive coordinator Jason Gesser (yes, that Jason Gesser) will serve out the season as interim head coach, unless the university kicks in a substantial raise to Akey's relatively modest salary, it may as well make Gesser full-time.

Despite his mostly dismal record over six years, Akey at least had the virtue of seeming to care about the direction of Vandal football at a point when that direction is very much in doubt, and even he was forced to admit this summer that conference realignment had left the program as the "unwanted red-headed stepchild" of the FBS. Whoever succeeds him will inherit a program without a conference, planning to move forward next season as an independent with at least one hole still left to fill on its 2013 schedule and likely much greater uncertainty looming in the near future. Since moving up to the I-A/FBS level in 1996, Idaho has managed three winning seasons and two bowl bids – both to the nearby Humanitarian Bowl, in Boise – including an 8-5 finish under Akey in 2009. Not including their 1-7 start this year, the Vandals' winning percentage in that span (.351) is easily among the worst in the nation. They play their home games in the smallest venue in the FBS. Whoever agrees to assume the burden of turning that around in an outpost struggling just to survive at that level, more power to them. 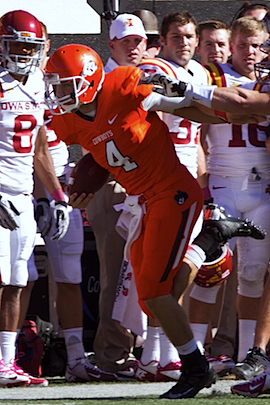 • GREAT GAME! WHAT ON EARTH WERE YOU THINKING? Per his head coach, Oklahoma State quarterback J.W. Walsh is out for the rest of the season with an unspecified injury, which came as a surprise Sunday to everyone – yours truly included – who watched Walsh take every snap in Saturday's 31-10 win over Iowa State with no visible signs of distress. (The OSU beat writer for the Tulsa World said he initially thought the news was a joke.) In fact, Walsh played virtually the entire game on an injured knee that he concealed from the first quarter on, and even told reporters after the game that he felt "100 percent" before the adrenaline started to wear off Saturday night. Thus the rare season-ending injury that still allows the afflicted to pass for 410 yards and run for 46 more without realizing anything is wrong.

According to Walsh's father, his son is only expected to miss 3-to-5 weeks with a fractured knee, which opens the possibility of a return for the season finale against Baylor, if not sooner. Mike Gundy, however, did not seem open to that possibility, so take the family diagnosis with the requisite dosage of salt.

At any rate, alert readers will recall that Walsh began the season as a backup himself, coming on in relief of injured freshman Wes Lunt in OSU's third game, although it's fair to say he'd played himself into the starting role in the meantime: In three starts, he completed more than two-thirds of his passes for well over 300 yards per game, and accounted for six total touchdowns – not quite Brandon Weeden-worthy numbers, but good enough from a redshirt freshman to keep the Cowboys in the thick of the Big 12 race with the nation's No. 1 total offense. Now, navigating the meat of the conference schedule falls back to Lunt, if he's healthy (he's reportedly been available on an emergency basis the last two weeks), or to junior Clint Chelf if he's not. True, Chelf has languished on the depth chart behind a pair of freshmen, but in this offense, we've seen repeatedly over the years that it hardly makes a difference who happens to be pulling the trigger.

• THE GREATEST LUTZENKIRCHEN OF ALL. Senior tight end Philip Lutzenkirchen is one of the few remaining starters from Auburn's BCS championship run in 2010 still on hand for the Tigers' depressing descent to the bottom of the SEC West standings, and he informed fans after Saturday's 17-13 loss at Vanderbilt that he'll be watching the rest of the debacle from the bench:

Sad to say it is over at Auburn. Thanks for the opportunity to play in O&B on Saturdays. It was the best decision of my life to be a Tiger

Hips been bothering me since fall camp and its to the point where I was hurting the team for me to not play at 100%. Gave it all I had. Sorry

Even if he'd never caught another pass over his final two seasons, Lutzenkirchen's place in Auburn history was secure the moment he brought in the game-winning touchdown pass from Cam Newton in the 2010 Iron Bowl, thereby completing the Tigers' rally from 24-0 down in Tuscaloosa, saving their dreams of a national championship and spawning an extremely minor dance craze. Godspeed, sir, and rest assured that your SEC record for "Most Fun Name to Shout in a Harsh German Accent" will never be broken.

• HAVE SCOTT FROST TATTOO, WILL TRAVEL. Northwestern blew a double-digit lead over Nebraska Saturday by allowing two long, late touchdown drives that put the Cornhuskers ahead by one point, 29-28, with just over a minute remaining in the fourth quarter. From there, the Wildcat offense ran head-first into the vaunted "Sea of Red" on its final possession… even though the Wildcats were playing at home:

There were so many Huskers devotees among the crowd of 47,330 that the Wildcats had to use a silent count on their final drive because their linemen could not hear the calls.

"We didn't prepare for that all week," quarterback Kain Colter said."

It showed: After moving the chains into Nebraska territory on three consecutive completions by quarterback Trevor Siemian, the Wildcats stalled, and came up short – er, wide right – on a 55-yard field goal attempt by Jeff Budzien. Judging from the postgame love-fest among the Huskers, their presence was no exaggeration:

Then again, the irresistible presence of Kenny Bell's astonishing 'fro is enough to distract even the most disciplined offenses all by itself.

Quickly… San Diego State's upset over Nevada may have cost the Aztecs their starting quarterback for the rest of the season. … Ohio State expects quarterback Braxton Miller to return to normal practice on Tuesday. … Apparently some Oklahoma fans are still pretending to hate Notre Dame for something that happened 55 years ago. … And if it looked like Miami quarterback Stephen Morris was playing in serious pain against Florida State, that's because he was.