BCS Realpolitik: Try as they might, even skeptical computers can't stem the Tide

Share All sharing options for: BCS Realpolitik: Try as they might, even skeptical computers can't stem the Tide 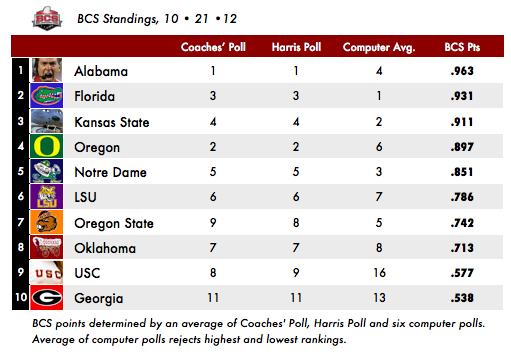 Politicians desperate to wring a few more votes out of the state of Alabama over the next few weeks should stop attacking their opponents and start running ads against the BCS computers, whose respective algorithms present a grave threat to the American Way by ranking the Crimson Tide a mere fourth this week in their godless, collectivist, data-driven "wisdom." Only one of the six computer polls (Richard Billingsley's) ranks Alabama No. 1, and that result is thrown out of the Bama's average as the high score; instead, it's Florida taking the gold from the digital demographic with three first-place votes on the heels of Saturday's win over South Carolina, and Kansas State trailing close behind at the top of rankings from both Anderson & Hester and Peter Wolfe. With the relevant human polls in virtual lockstep for the Tide, that's as close as you're going to get this week to diversity.

As usual, the divide between the human polls and the computers is born of the bizarre ban on allowing the computers to account for margin of victory, thereby favoring teams that win close against tougher schedules over teams that blowout a motley crew of mediocrities. Florida and Kansas State fall into the former category, having combined so far for five wins against teams in this week's top 20; Alabama, on the other hand, has not faced a current top-20 team, and has only dispatched one (Michigan) still ranked in the top twenty-five. Obviously, the computers are withholding their love until they see what happens in Baton Rouge on Nov. 3, the first time I've ever been jealous of the fact that they can't see the final score.

• ON DECK. Not counting the SEC or Pac-12 championship games, Alabama-LSU is one of nine ELIMINATOR games over the next five weeks between teams currently ranked in the top dozen: 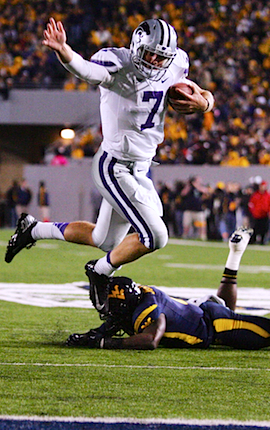 The only realistic contender missing from that lineup? No. 3 Kansas State, which has already passed its biggest tests at Oklahoma and West Virginia with flying colors, and which also has the luxury – assuming the Wildcats win out – of not having to clear an additional hurdle in a conference championship game. (Though K-State will be playing on Dec. 1 regardless, in a regularly scheduled game against Texas; stakes TBA.) At least one of the two teams currently sitting above the Wildcats must eventually lose, even if it takes Alabama and Florida battling to the death in another winner-take-all SEC Championship Game for that to happen. Make no mistake: The rest of K-State's schedule is a minefield in its own right. But in terms of making it to Dec. 2 unscathed, the Wildcats are the only team on the board that can get there simply by holding serve.

• REALPOLITIK TOP TEN. Is that good enough to secure one of the golden tickets to the championship game in Miami? If K-State is the only undefeated team left standing, or one of two undefeated teams, then the answer is yes, without a doubt. If there's more than one unbeaten, frankly, I have no idea what the pecking order will be – only that the odd man is out is going to be pissed off, and rightfully so.

Despite their current position, I think the lack of an elite victim down the stretch means the Wildcats are going to need some help to avoid being permanently jumped by an undefeated Oregon or undefeated Notre Dame if the Ducks and/or Irish add a couple of blue-chip scalps to their trophy case. By that standard, here's my best guess at the pecking order for the championship game according to various, still plausible scenarios in the final standings: 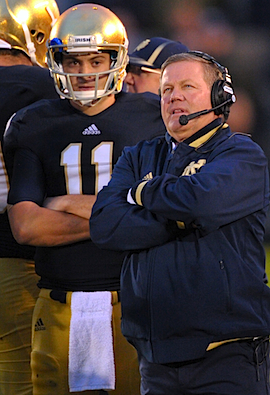 Right now, the "status quo" matchup is an undefeated SEC champ (i.e. Alabama or Florida) against an undefeated Oregon with wins over USC, Stanford and Oregon State, and most likely USC again in the Pac-12 Championship Game. If the SEC erupts into a self-immolating clusterfuck that leaves everyone sporting a loss, or the Ducks go down at any point, next in line would be an undefeated Notre Dame outfit boasting wins over Oklahoma and USC, as well as – let's face it – the unstoppable cachet of a justifiable, non-ironic "Wake Up the Echoes" campaign. If the Fighting Irish's resurrection falls by the wayside, too, then the baton falls to Kansas State, if the Wildcats take care of their business in the Big 12. But only then.

(Oh, and sorry, Mississippi State fans, but the Bulldogs don't qualify as "plausible" yet without at least one major upset under their belt. If y'all run the table against Alabama, LSU, Texas A&M and the SEC East champ, I'll figure out a way to eat this blog.)

• LOSS TO N.C. STATE? DOES NOT COMPUTE. Looking a little further down the standings, the biggest gulf between the human polls and their computer counterparts is over Florida State: The Coaches and Harris polls both rank FSU tenth, while the highest the Seminoles appear in any of the computer polls is No. 15; one of the algorithms, Kenneth Massey's, doesn't even rank them in the top twenty-five. The Noles' average among the six computers leaves them at No. 21, creating the biggest spread between the assessment of man and machine – 11 positions – anywhere in the data. Even with Florida still on the schedule, the computers' determination to ignore the existence of the rest of the ACC entirely is probably too much for FSU to overcome re: the BCS title game.

The computers are also bearish on USC, ranking the Trojans 16th on average compared their standing at No. 8 and No. 9 in the respective human polls, and bullish on Texas Tech, unanimously ranking the Red Raiders in the top ten on the strength of back-to-back wins over West Virginia and TCU.

• FOR CHAOS' SAKE. It's early still, so the status quo is unwieldy enough: There's a very real possibility right now that four major teams – Alabama/Florida, Oregon/Oregon State, Kansas State and Notre Dame – could finish the season unbeaten, all of them boasting big wins and compelling resumés, and that's before you even think of factoring in an unbeaten Rutgers or Louisville (both off to 7-0 starts) from the Big East. No other scenario right now would rattle as many cages as the one where an unbeaten Notre Dame and/or an unbeaten Big 12 champion is instructed to talk to the hand.