Tortoise bludgeons hare in another affirming road upset for the Wildcats.

Share All sharing options for: Kansas State 55, West Virginia 14: Unsafe at any speed

Kansas State 55, West Virginia 14
- - -
1. Before we get to the superlatives for the Wildcats and their scrappy, methodical brand of Snyderball – don't worry, they're coming – a readjustment is in order. Two weeks ago, West Virginia was 5-0 and ranked in the top five in the major polls on the strength of back-to-back wins over then-undefeated Baylor and then-undefeated Texas in which the Mountaineers combined for 118 points. As it turns out, what they scored in those games is irrelevant compared to what they gave up: While the once-explosive offense has ceased to emit any discernible traces of heat in back-to-back, blowout losses, the defense continues to burn like an old, abandoned couch with large tracts of exposed stuffing.

The defenses West Virginia pillaged on its ascent, Baylor and Texas, were both slaughtered again in equally grisly fashion in their next games (Texas yielded 63 points to Oklahoma; Baylor gave up 49 to a TCU attack decimated by personnel issues), and just took turns putting the sword to one another Saturday night in a 56-50 shootout in Austin that featured 14 touchdowns and nearly 1,200 yards of total offense between both teams. The Longhorns and Bears currently rank 107th and 120th, respectively, out of 120 teams in terms of total defense. These are the prize victims that made Geno Smith et al the hottest story in college football, back when we were all convincing ourselves that it didn't really matter if the West Virginia defense was playing with fire as long as the West Virginia offense was playing with nukes. 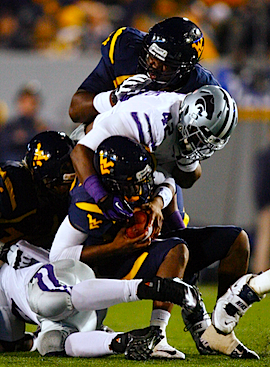 In its last two games, the formerly atomic attack has generated one (1) single, solitary touchdown drive outside of garbage time as the defense smolders on, and all the Mountaineers' BCS ambitions are in ashes. Of course, in retrospect, we all saw it coming. We just couldn't tell what we were looking at for all the smoke.

2. Bill Snyder's teams have always had a knack for dragging up-tempo, hare-like spread attacks into a more deliberate, tortoise-friendly tempo, but this must rank among the most ruthlessly efficient performances of Snyder's career or anyone else's. Kansas State only had ten offensive possessions in the entire game, including garbage time, etc., but scored on nine of them, including a run of seven consecutive touchdown drives covering 92, 64, 75, 78, 24, 16 and 77 yards. The Wildcats were 6-of-9 on third down, moved the sticks 24 times and amassed a seven-minute advantage in time of possession, all in just 62 snaps.

On the other side of that coin, West Virginia's offense only had nine full possessions of its own, half of them coming with the game already out of hand in the second half. Opposite human locomotive Collin Klein, the Mountaineers' slow start was an instant death knell: After two quarters, West Virginia had managed just 17 snaps on three offensive possessions, punted on all three and trailed 31-7 going into the half. If not for a 100-yard kickoff return by Tavon Austin in the second quarter, West Virginia would not have scored at all until a late, garbage-time touchdown with 52 points already on the board for Kansas State, and both scores were essentially meaningless.

3. In case you haven't heard, Klein was pretty much perfect, almost literally: He was 19-of-21 passing for a career-high 323 yards – that's 15.4 per attempt, 16.7 per completion – and three touchdowns with no interceptions. His pass efficiency rating, 266.8, was the best this season against an FBS defense (although that number was exceeded by Matt Barkley's obscene afternoon against Colorado), and his top two receivers, Tyler Lockett and Chris Harper, both turned in career highs for both catches and yards. Oh, right: And Klein also had four touchdowns rushing. Almost forgot that part!

So yeah, it goes without saying that Collin Klein is your new, alarmingly Tebow-esque avatar for [insert superlative], thus providing national outlets with an unexpected surplus of the humble, Aryan grit they demand. Until further notice, he deserves every bit of the attention, too: Guy's not going to put up 300 yards and three touchdowns passing every time out – as predicted, West Virginia's defense presented him with perhaps his best (and perhaps only) opportunity for a big stat game against a respected, recognizable opponent on national television, and he took it – but he is unmatched right now at pulling the strings within his system. He may not fit in a lot of other systems, especially the kind that would have him put the ball in the air 30 or 40 times a game without the benefit of a healthy play-action game, but in this one, Klein is in total command. 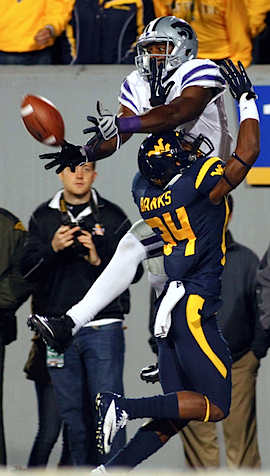 4. With convincing road wins at Oklahoma and West Virginia, the Wildcats remain alone atop the Big 12 standings and solidify their place among a shrinking cadre of national frontrunners down the stretch. Of the remaining contenders in that class, they may have the shortest remaining path to nirvana: Unlike Alabama, Oregon, Florida, Notre Dame, Oregon State, LSU, Oklahoma, Florida State or USC, Kansas State a) Doesn't have any of those teams on its remaining schedule, and b) Doesn't have the additional hurdle of a conference championship game to clear in December if it finishes the job in the regular season. None of the last five games (against Texas Tech and Oklahoma State in Manhattan, followed by road trips to TCU and Baylor, then back home against Texas to close) is a cakewalk by any stretch, but as long as Klein is in one piece, K-State will be favored to win all five.

That's a big difference in this year's 7-0 start and the 7-0 start in 2011, which featured just one win over a ranked team (Baylor, by one point, in Manhattan) and nothing that screamed "contender" – the closer you looked at that team, in fact, the more its record seemed like smoke and mirrors. As soon as the '11 Wildcats faced a bona fide heavyweight, they were smacked down by Oklahoma, and went on to drop games to top-ten finishers Oklahoma State and Arkansas. This year, they've already cleared the two tallest hurdles on the schedule, and looked impressive in the process. From here, it's just avoiding a stumble as the momentum starts increasing downhill.

5. As for West Virginia: The Mountaineers limp into a bye week off two of the most sobering losses of the past two decades, and who knows what kind of team is going to emerge on the other side. It doesn't get any easier, either, with TCU, Oklahoma State and Oklahoma waiting in the next three games. The further into the hole they sink, the more frustrated and disoriented they seem to become. This can still be a successful season, but we're about to learn a lot about Dana Holgorsen's program.