Gators feast on four turnovers in an affirming start-to-finish blowout, and possibly obscure some lingering offensive issues in the process

Florida 44, South Carolina 11
- - -
1. Watching this game, I was struck by how much the 2012 Gators reminded me of the 2011 LSU outfit that ran the table through the SEC Championship Game, in that it's able to generate a ton of points – or at least opportunities for points – without doing very much on offense. Or, in this case, without doing much of anything on offense at all.

Technically, Florida didn't score today on defense or special teams, but really it did, repeatedly: Out of six touchdown drives, four began inside the Gamecocks' 30-yard line due to a giveaway, takeaway or return, and three of those began inside the USC ten. All six drives combined covered a grand total of 146 yards on 31 plays, and a dozen of those plays went for a gain of one yard or less. Jeff Driskel's four touchdown passes covered a grand total of 23 yards. Including a short field goal drive that began at midfield, none of the Gators' seven scoring drives in all crossed the 50-yard line. From the offense's perspective, it may have been the easiest 44 points anyone has ever scored. 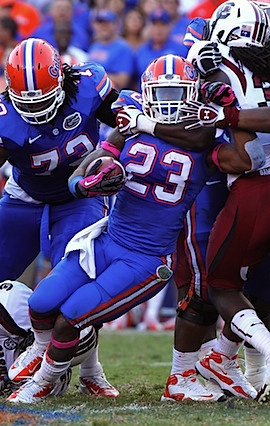 2. Looking at the box score, I was struck by how much the numbers reminded of Florida's disastrous offensive effort in last November's 21-7 loss to Florida State, the kind of historic, rock-bottom collapse that convinces the offensive coordinator he should probably start sending out his resumé to Kansas or wherever. At the time, pretty much everyone agreed that the night was an unmitigated debacle, the final, thudding crash at the bottom of a free fall spanning nearly two months, a depressing symbol for the rapid decline of the program from its Urban/Tebow-era heyday, etc. You get the idea.

Statistically, it was Florida's worst game in terms of total yards (184) and yards per play (3.0) in at least 20 years, and the scoreboard reflected it. The final tally today: 183 yards on 2.8 per play, but the scoreboard didn't reflect it at all.

Obviously, some of that is a result of having such little ground to cover for so much of the afternoon. But the Gators also had ten offensive possessions that weren't preceded by a giveaway, takeaway or big return, and the vast majority of them ended badly. In the first half, their first four, full possessions resulted in negative yardage and four consecutive three-and-outs. In fact, aside from a late, clock-killing drive in the final five minutes, all seven of the Gators' non-scoring drives were three-and-outs. (The three shortest touchdowns drives all covered three plays or less.) Mike Gillislee, who has shouldered a greater share of his team's tootle offense than any other tailback in the conference, had just 34 yards on 20 touches. Only two plays all day covered more than 16 yards, and the better of the two, a one-handed bomb to a wide open Omarius Hines for a touchdown, was called back for being too interesting a penalty along the line of scrimmage.

At least somebody was making things happen downfield, even if it didn't count.

3. There will always be legions of fans – not just partisans, either – willing to shrug that off and remind you that "defense wins championships" and "the only number that matters is on the scoreboard" and so forth, with weird games like this one serving as ammunition. But assuming Florida has straight-faced designs on the SEC and BCS championships, a blueprint that calls for a succession of turnovers and a handful of other breaks on behalf of the defense and special teams while the offense chills out does not exactly qualify as a master plan. (As LSU can well attest.) Every indication so far is that Driskel is a significant upgrade over John Brantley in the within-the-offense/game-manager role, and Gillislee may be the every-down, All-SEC workhorse they've been waiting for here for at least a decade. But against the cream of the schedule to date, Texas A&M, LSU and now South Carolina, they offense as a whole does not seem to have come all that far from the one that failed to score more than one touchdown last year in any of its six losses.

At some point, the attack that hung 555 yards and 37 points on Tennessee back in September has to show up against a heavier hitter – there are two left in the regular season, Georgia next week and Florida State in November, and possibly a third in the SEC Championship Game – or the defense is going to buckle under the pressure of carrying the entire operation.

4. Today, of course, the upshot is that the defense was that good, and for now, at least, it is making life incredibly easy for the offense. That's an essential leap forward: On paper, the biggest difference between the 2011 Gators that limped to a losing conference record and the 2012 Gators swaggering among the national elite is the turnover margin. Last year, the defense forced 14 takeaways all season, worst in the SEC, and finished in the red in every loss. With four takeaways today, the current defense has 15 in seven games, and the team has finished in the black in every game; the offense has only turned the ball over four times, another way it's hewing to the 2011 LSU playbook. As long as that pipeline stays open, it looks like a more sustainable business model.

5. There are few things more enjoyable in life right now than Will Muschamp raging out on a weekly basis, and the more random, the better.

That very special moment was captured at halftime, at which point Florida had more points (21) that total yards on offense (14, including negative penalty yards), and led comfortably by two touchdowns after a 51-yard field goal by South Carolina's Adam Yates on the last play of the half.