LSU lays low, then knocks out Texas A&M with a very familiar punch

LSU 24, Texas A&M 19
- - -
1. For the many thousands of words that precede every big game, rarely has one ever played out so perfectly along the lines of the pregame script. Texas A&M, the inveterate choker, roared out of the chute, led by double digits in the second quarter, and promptly blew it amid a parade of miscues and missed opportunities. Of the Aggies' eight losses over the last two years – including both this year – they've led by at least 10 points in seven of them. Meanwhile, LSU, the methodical, bruising heavyweight, successfully absorbed the early hit and slowly ground its opponent into dust.

In LSU's case, though, the commitment to type-casting is truly astonishing. The second half in College Station was a virtual beat-for-beat replay of the Tigers' methodical, bruising win over South Carolina last week in Baton Rouge, right down to the long, icing touchdown run by freshman tailback Jeremy Hill with the clock winding down in the fourth quarter. (Just like last week, Hill's breakthrough came on the first play of a possession beginning at midfield, with LSU clinging to a tenuous, one-score lead in the final five minutes. Just like last week, it also accounted for LSU's only really big play of the game.) For the second week in a row, the Tigers' banged-up offensive line wore down an athletic, aggressive but ultimately overmatched defense. For the second week in a row, the defense hemmed in an athletic quarterback and forced him into multiple turnovers. For the umpteenth time, the offense overcame an uninspired effort, statistically, by capitalizing on good field position and turnovers created by the defense. Texas A&M came in energetic and prepared, and was subjected to a hard lesson in LSU 101.

2. Despite the final score, "uninspired" is being kind to the LSU offense: Out of 15 full possessions, ten ended in punts, and seven of those – nearly half of the Tigers' total possessions for the game – went three-and-out. They punted on their first five possessions of the game, and on three of the first four possessions in the second half; the fourth ended in a missed field goal that wasted good field position. Two of their three touchdown drives began on A&M's side of the field (the third began on LSU's own 42), and two required fourth down conversions to keep the drive alive. The Tigers' final output in terms of total offense, 316 yards, was nearly 100 yards below the Aggies' average yield on defense (405.5 yards), and nowhere near the 531-yard average they'd allowed to their last three opponents. 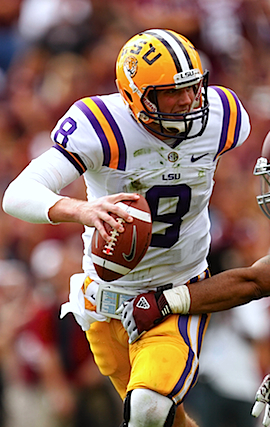 The good news in that story is that a) LSU did manage three touchdown drives despite possessing no discernible passing game, and b) The ground game went over 200 yards for the second week in a row with Hill eventually stealing the show (again) thanks to 127 yards on 7.1 per carry. The bad news is that, even in a tough win on the road, Zach Mettenberger still looks more like a liability at quarterback than an asset: He was an abysmal 11-of-29 passing today, for an even more abysmal 3.3 yards per attempt, against a secondary that's been routinely shredded through the air. There's still no reliable deep threat among the receivers, a la Rueben Randle in 2011, although it's not clear that it would make any difference if there was. The only remotely good thing to say about LSU's offense when the ball was in the air is that – unlike last week – at least there were no turnovers.

3. The same cannot be said for Texas A&M, which witnessed the untimely-yet-inevitable demise of the burgeoning "Johnny Football" bandwagon. Johnny Manziel does a lot of interesting, exciting things on the run, some of which actually result in positive plays instead of interesting, exciting sacks, but he finally met a defense that made him look like a redshirt freshman: The Tigers' three interceptions matched Manziel's total over the first half of the season, and his 27 yards rushing was less than half what he'd managed against any other defense, including Florida's in the opener. To be fair, at least one of the picks, an accurate ball that caromed off a wide receiver running over the middle, is not on the quarterback, but his season-low completion percentage (51.8) unfortunately is.

Manziel is obviously a great athlete, and his elusiveness often gave LSU fits – trying to sack the guy is like trying to put a novelty sweater on a loose rabbit – but this is typically the time of year that young, fast-starting quarterbacks hit the wall. (See also: Jacory Harris in 2009, Denard Robinson and Taylor Martinez in 2010.) He has plenty of time left to get over the hump against the conference's elite, although after this year, he may not have the veteran line stocked with future draft picks.

4. In fact, the Aggies moved the ball more effectively against the LSU than pretty much any SEC offense in a long, long time: A&M is the first conference opponent to hang 400 yards on the Tigers since November 2010, and incredibly, even if you exclude a late, largely meaningless touchdown drive that ate up 80 yards in the fourth quarter, it's the first offense to crack 300 yards against LSU this year. But they missed a ton of opportunities, settling for field goals on a couple of occasions in the first half and missing a pair of crucial kicks in the fourth quarter.

The real killer came about midway through the fourth, after LSU hit a field goal to go ahead 17-12. On the ensuing kickoff, five-star freshman Trey Williams did this:

…setting up his offense at the LSU 16 with a golden chance for the go-ahead touchdown. His offense proceeded to gain two yards on three plays, then watched a field goal attempt sail wide. The next time A&M touched the ball, Manziel was picked off for the third time, and one play later Jeremy Hill was off to put the game in the cooler.

5. Next week is a badly needed, perfectly timed bye week for LSU ahead of the do-or-die showdown with Alabama on Nov. 3, coming on the heels of back-to-back-to-back slugfests that have produced their share of injuries and attrition – most notably on the offensive line, where veteran starters Josh Williford (concussion) and Alex Hurst (personal) could conceivably be back after missing the last two games. If only because of Mettenberger's ongoing struggles at the most important position, the Tigers have not exactly passed the eyeball test of a would-be champion outside of a 41-3 romp over Washington back on Sept. 8; in four SEC games, they're actually being outgained and very nearly outscored (!) on average.

Still, every preseason goal is still on the table with a win over the Crimson Tide: SEC championship, national championship, BCS bowl. If LSU is the team everyone thought it could be when the Tigers opened atop most of the preseason polls, the next two weeks are its last chance to make the hype reality.