Michigan's new man in the middle, Kansas State's shutdown corner and more of the day's most pivotal players, personalities, match-ups and schemes

•CONNOR SHAW, QB, South Carolina
Marcus Lattimore is fifty-fifty to play against Florida due to a bum hip. Ace Sanders and Bruce Ellington have been figting through the flu. Jadeveon Clowney is slowed by a foot injury. Every member of the interior defensive line is banged up and/or suspended. At least one starting offensive lineman is still on the shelf with a nagging shoulder injury. The only recognizable name who appears reasonably healthy? The Gamecocks' undersized junior quarterback, who's certainly no stranger to the injury report himself.

Shaw was spectacularly efficient in Carolina's back-to-back-to-back wins over Missouri, Kentucky and Georgia, in which he was 41-of-49 passing with six touchdowns and zero interceptions and averaged more than eleven yards every time the ball left his hand; in the same stretch, he also added 195 yards rushing. But he was very ordinary last week at LSU, where he was picked off twice, and that was with an ostensibly healthy Lattimore at his disposal – he's never been asked to carry the offense against a defense of the caliber he'll see today in Gainesville. Even if his own D is a match in another low-scoring, 13-round slugfest, Carolina's SEC and BCS ambitions hinge on Shaw not only not losing the game on a critical mistake, but actually making enough throws to win it, even on a few occasions when the Gators are pinning their ears back.

•RICKY BARNUM, C, Michigan
Last year, Michigan State racked up seven sacks by eight different players against Michigan in East Lansing, on an assortment of blitzes from all over the field. But many of them came right up the middle, over the top of the Wolverines' All-American center, Dave Molk, including the blitz that forced Denard Robinson to serve up the game-clinching interception in the fourth quarter.

If the Spartans came after Molk, they'll certainly come after Barnum, who's generally considered the weak link among Michigan's front five. Here's guessing the Wolverines have spent a little time this week mixing up the snap count. 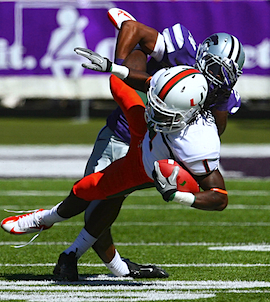 •NIGEL MALONE, CB, Kansas State
The first half of Malone's season has been relatively quiet compared to his busy, breakout 2011 campaign, which tends to happen to guys who emerge as out-of-nowhere All-Big 12 picks after leading the league in interceptions. He'll get plenty of airtime tonight at West Virginia, most of it opposite the Mountaineers' prolific deep threat, Stedman Bailey, who still has five more touchdown catches than any other receiver in America despite missing the second half of last week's loss to Texas Tech to a bum ankle. In the most pass-oriented conference in the country, it's only appropriate that the pivotal game in the conference race hinges on the best corner going man-to-man against the best receiver.

•SAM CARTER, S, TCU
The headlines after last week's 49-21 rout over Baylor went mainly to the Horned Frog offense, which suddenly looked like its old, explosive self again on the heels of a sobering, turnover-marred flop against Iowa State on Oct. 6. But Carter was the key cog in the equally reassuring straitjacketing of Baylor's top-ranked offense, turning in a team-high seven tackles and two sacks to go with one of TCU's four interceptions for the night. Texas Tech still knows its way around a shootout, as amply demonstrated in last week's upset over West Virginia, and the last thing the Frogs want is to put redshirt freshman quarterback Trevone Boykin in the position of repeatedly holding serve against the Red Raiders' alarmingly competent secondary.

•GREG GARMON, RB, Iowa
Surprising starter Mark Weisman has been cleared to play tonight against Penn State on a gimpy ankle, although coach Kirk Ferentz sounded skeptical this week that his most productive player – Weisman has gone over 100 yards on the ground in four consecutive games, in which the Hawkeyes are one botched onside kick away from being 4-0 – would be effective. That leaves Garmon, a touted true freshman who (like every back on Iowa's roster) has endured injury issues of his own, and has managed just 2.5 yards per carry on 14 attempts through the first six games. Relatively speaking, that makes him a veteran: Other than Weisman, no other available Hawkeye back against the Nittany Lions has set foot on the field this year.