Mid-Major Monday: BYU, on the defensive

Share All sharing options for: Mid-Major Monday: BYU, on the defensive

With Friday's 47-0 whitewash of Hawaii, BYU has faced three of the most respected offensive minds in college football in its first five games – Mike Leach of Washington State, Chris Petersen of Boise State and Norm Chow of Hawaii – and held all three of their offenses without a single touchdown. Altogether, in 20 quarters of football this year, the Cougars have held opposing offenses out of the end zone in 17 of them, and rank in the top five nationally in total defense and scoring defense. So why are they languishing in the standings at 3-2?

For anyone who watched their punchless effort at Boise State last month, it's not much of a question. In that game, BYU turned the ball over five times, managed just 200 yards of total offense and came nowhere near the end zone until its final possession, ultimately losing 7-6 despite holding the Broncos to their worst offensive output at home in well over a decade. The previous week, BYU held Utah to a paltry 245 yards in Salt Lake City, and still lost, 24-21, courtesy of two turnovers and the multiple field goal debacle you probably remember. That's two losses by a combined four points, on the road, saddled by a –7 turnover margin, with legitimate opportunities to win at the end of both. 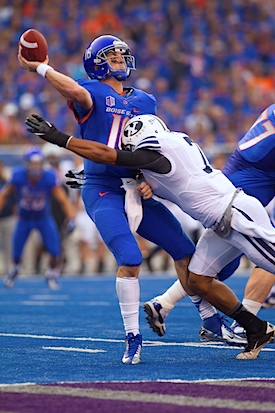 Does that give them any hope of surviving an upcoming stretch against Utah State, Oregon State and Notre Dame – combined record: 12-1 – over the next three weeks, conceivably generating some darkhorse BCS juice heading into November? If newly installed freshman Taysom Hill turns out to be the answer at quarterback, the defense is obviously going to give him a shot. At some point, though, the offense has to stop giving it away.

• Boise Blues, Continued. When I wrote about Boies State's obvious regression in this space last week, I certainly didn't think the Broncos had regressed to the point that they could give up 330 yards rushing in a narrow, 32-29 escape at New Mexico. The Lobos stormed out of a 25-0 halftime hole to pull within three points midway through the fourth quarter, but couldn't finish the comeback before Boise successfully killed the clock. New Mexico's total on the ground – again we're talking about New Mexico, widely regarded as the most hapless, mismanaged program in college football over the past three years, the anti-Boise State – the Lobos' total on the ground was more than any Bronco defense has allowed in a game since yielding 396 to Nevada in 2007, and that was in quadruple overtime. And the defense was supposed to be the strength of this team.

For now, Boise is 3-1, but between this near-debacle and the offense's failure to score a touchdown against Michigan State or BYU, it's safe to say the top of the Mountain West is up for grabs. And for god's sake, stop ranking them.

• The USA requests you to cease and desist. Only eight teams in the FBS ranks made it through September without a single win, and half of them play in Conference USA: Memphis, Southern Miss, Tulane and UAB are sitting at a combined 0-16. Currently, nine of C-USA's dozen teams boast losing records, and only one team, Tulsa, has a winning record (2-1) outside of the conference, thanks to a pair of wins over Nicholls State and Fresno State. When the other members of the conference are getting hammered by Western Kentucky and Louisiana-Monroe, you'll take what you can get.

• Archer! More on this game directly below, but first, just count the seconds it takes Kent State's Dri Archer to cover 99 on this kick return against Ball State:

I've got him at about 11 seconds from catch (0:22 in the video) to crossing the goal line (0:33), which of course includes some minimal zig-zagging to get into the open field and a little bit of a trot over the last 15 yards or so. Verdict: Man is fast.

He's also prolific: Archer finished the day with 350 all-purpose yards – 72 rushing, 104 receiving, 174 on kick returns – easily the best single-game total this season by anyone in the FBS. (For his efforts, he's currently leading the nation in kickoff returns.) Archer also scored three touchdowns against the Cardinals, every one of which was needed in the… 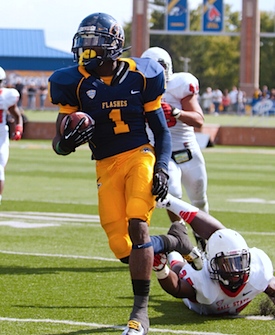 Incredibly, there was no scoring in this game in the first quarter. But once the floodgates opened, they stayed opened: The last three quarters featured ten touchdowns and 14 scoring drives between both offenses, all covering at least 50 yards. Opposite Archer, Ball State quarterback Keith Wenning was 32-of-43 passing for 445 yards and five touchdowns without an interception, and his team lost.

It wasn't without a valiant effort, though. Ball State trailed by double digits on three different occasions, including a 42-29 deficit with 9:21 to play in the fourth quarter. From there, Wenning took the Cardinals 76 yards for a touchdown that cut the score to 42-36; thirty seconds later, they were in the end zone again, when Wenning followed a quick interception by the BSU defense with a short, go-ahead strike to Connor Ryan. PAT good, Ball State leads 43-42. After trading punts (really!), Kent State took over on its own 6-yard line with 2:49 to play, and proceeded to embark on a 15-play, 86-yard march to set up kicker Freddy Cortez from 25 yards out. The kick: Up, good, etc. The Golden Flashes are 3-1. Drive home safely.

• MID-MAJOR PLAYER OF THE WEEK: Quanterus Smith, DE, Western Kentucky
On a day defined on all levels by record-breaking passers, there was one man willing to stand up, take the quarterback down and claim his house for the defense. That man was Quanterus Smith, last seen wreaking havoc at Alabama a few weeks back with three sacks on A.J. McCarron, and often seen Saturday in the Arkansas State backfield: Smith was credited with a hand in four sacks and six tackles for loss in a 26-13 Hilltopper win.
- - -
Honorable Mention: OK, yes, fine: Miami (Ohio) of Ohio quarterback Zach Dysert racked up 624 total yards in a 56-49, overtime win over Akron. For the game, Dysert added 108 yards rushing on top of 516 and six touchdowns passing. … Fresno State quarterback Derek Carr, brother of Derek, set a new Mountain West record with 579 yards of total offense in a 52-40 win over San Diego State, in which Carr was 42-of-56 passing with five touchdowns. … And Ball State wide receiver Willie Snead came down with 14 receptions for 216 yards and two touchdowns in a losing effort against Kent State.

• UPSET OF THE WEEK: Middle Tennessee 49, Georgia Tech 28
Georgia Tech's teetering season officially went over the edge at halftime, after which the Yellow Jackets were outscored 28-7 and generally embarrassed by a team whose only four previous wins over the last two years had all come against Florida Atlantic and Memphis. Blue Raider tailback Benny Cunningham – a career back-up with one 100-yard rushing game to his credit, in 2011 – ripped through the Tech defense for 217 yards and five touchdowns, and he wasn't even responsible for the highlight of the day:

A SOMEWHAT ARBITRARY MID-MAJOR TOP 10.
1. Louisiana Tech (4-0). Bulldogs have already won on the road at Illinois and Virginia; barring another hurricane, Texas A&M still has to come to Shreveport in two weeks.
2. Ohio U. of Ohio (5-0). Close call at UMass almost negates the Bobcats' opening day win at Penn State, although I'm still not sure who on the remaining schedule is going to beat them.
3. Nevada (4-1). Wolf Pack are still only one point from a perfect season, and probably will be until Boise comes to Reno on Dec. 1.
4. Boise State (3-1). Broncos are winning, for now, but almost on par with Wisconsin and Arkansas for how far they've declined in one year.
5. Louisiana-Monroe (2-2). Just to dispel any rumors about a Sun Belt letdown, the Warhawks transitioned from "Giant Killer" with a 56-3 beatdown of Tulane.
6. Utah State (4-1). Aggies are going to spend all season ruing that missed field goal at Wisconsin.
7. BYU (3-2). Transition at quarterback off to a promising start hitting crucial midseason stretch. 8. Western Kentucky (4-1). When Willie Taggart took over as head coach in 2010, it looked like it would take the Hilltoppers a decade to win four games.
9. Middle Tennessee (3-1). Blue Raiders were just another nondescript, bad team before Saturday. Am I overrating a win over imploding Georgia Tech?
10. Tulsa (4-1). There has to be a Conference USA team in here somewhere, right?
- - -
Honorable Mention: Central Florida, Fresno State, Louisiana-Lafayette, San Jose State, Toledo.

- - -
Next Week: Utah State and BYU take the Friday night spotlight. … UAB gets its best hope for a win against Southeastern Louisiana and soon-to-be former WAC-mates Idaho and New Mexico State meet in the first annual Homeless Bowl.