Oregon 43, Arizona State 21: All the carnage, half the time

The Ducks spent 20 minutes laying the Sun Devils to waste, and the rest of the night chilling until the merciful end

Share All sharing options for: Oregon 43, Arizona State 21: All the carnage, half the time

Oregon 43, Arizona State 21
- - -
1. In most Oregon games, everything that happens after a certain point – sometimes halftime, sometimes a little later – should be wiped from the record, subtracted from the official statistics and never spoken of again. Tonight, though, even that wouldn't convey the reality of this debacle. Not only does the vast majority of this game deserve to be thrown down the memory hole: By all rights, it should have been stopped on humanitarian grounds.

Thank god Oregon had the basic decency to police itself. For Christ's sake, the Ducks led 43-7 with 11:33 to play in the second quarter. They scored six touchdowns in the span of 18 minutes, two of them coming on runs longer than 70 yards. The last four of those came in a span of a little over five minutes. They spent more than two-thirds of the game deliberately throttling down. Twenty minutes in, Oregon had done everything it came to do. The rest was just politely killing time. 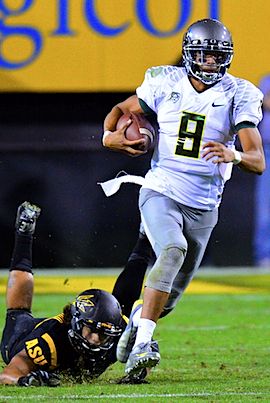 (For the record, in those 20 minutes, the Ducks amassed 325 yards with 15 first downs on 8.6 yards per play. For the rest of the game, they had 129 yards and three first downs, almost all of it on the ground, and didn't score again. Their season averages for yards and points will actually fall, as will their numbers on defense, which is a completely inaccurate reflection of what happened here.)

2. At any rate, at least the final margin makes no difference to the BCS computers, which (as always) are barred from taking the scoreboard into account – it's all the same to the machines if it ended 3 to 2, as long as they know which side is which. That's one of the reasons Oregon was snubbed by the computer polls in the initial rankings, coming in sixth despite being ranked No. 2 in all the mainstream human polls. At this point, though, the pecking order is irrelevant, because it can change so rapidly: After a sure-to-be-grisly scrimmage with Colorado next week, three of the Ducks' final four opponents (USC, Stanford and Oregon State) are ranked in the current polls, and then there's the Pac-12 title game against (presumably) USC coming on the first weekend of December.

There is no doubt that a recognizable team that runs the table against that stretch is bound for the BCS Championship Game, and every week there's a little less doubt Oregon is good enough – and just as importantly, consistent enough – to be that team.

3. Including tonight, Marcus Mariota has only started seven games, but already he seems indistinguishable from any of the other quarterbacks we've seen at the controls of Chip Kelly's offense – athletic, versatile and seemingly in firm command of the vagaries of the read option scheme. If there's a concern in his game, it's either ball security (he fumbled on the second snap of the game, setting ASU's only relevant touchdown just a few seconds in, and put it on the ground again later in the first quarter) or his ability to challenge defenses deep (he averaged just 3.8 yards per pass and 5.1 per completion, with a long of 11), which to be fair may have been muted in this case because it was so unnecessary. In his first road start, against the best statistical defense in the Pac-12 by a wide margin, Mariota looked the part and then some.

The really frightening thought for the rest of the conference is that he's only a redshirt freshman, with plenty of time and room to grow into an obviously live arm. Prolific quarterbacks seem to emerge in Kelly's system looking more or less fully formed, putting up the requisite numbers and making the right decisions right out of the chute. If Mariota is the guy who finally adds a viable downfield passing element to the equation, the nightmare scenario for defensive coordinators will finally be upon them.

4. Oh by the way Kenjon Barner is now a Jedi who wields the Force to stiff-arm would-be tacklers to the ground without actually touching them.

So that's just one more thing defensive coordinators might want to know.

5. Even in a horrific blowout, one of the pleasures of watching Oregon is knowing that, in any given game, you're likely to see at least a half-dozen things you've never seen before (only about half of which are fashion-related). A lot of the creativity is not even intentional. Earlier this year, we saw Bryan Bennett and Colt Lyerla accidentally combine for what may have been college football's first Siamese touchdown against Arizona. Tonight, we saw:

• A crazy swinging gate thing for a two-point conversion, run in by the kicker after being tipped by an ASU defender;
• An apparent Oregon touchdown nullified because officials wanted to review the previous play, but were too slow to signal dead ball before the Ducks had lined up and snapped it again. Upon review, the ruling on the first play (that Barner was down short of the goal line) was upheld, thereby costing the Ducks two touchdowns on a single review. According to beat writer Rob Moseley, that was the second time that exact scenario has unfolded this season.
• Two plays later, backup quarterback Bryan Bennett was credited with a 1-yard touchdown pass to starting quarterback Marcus Mariota, the recipient of a wild, last-second option pitch as Bennett was being buried by a handful of Devils near the goal line. Because of course Oregon is running the option with both quarterbacks in the game at the same time.

That was all in the first quarter alone. After that, best just to move along. Nothing to see here.