Kansas State at West Virginia: Bringing it all back home

While the Mountaineers resolve to recharge their season in Morgantown, K-State aims for the next level

Share All sharing options for: Kansas State at West Virginia: Bringing it all back home

1. In a little over three hours last weekend, the consensus view of West Virginia shifted from a high-flying contender on an inevitable ascent in the national polls to an inconsistent, possibly dysfunctional pretender that, frankly, was never going anywhere with that defense. Were they even that great in the first place? The Mountaineers themselves stomped at Texas Tech, 49-14, and called out in the process as "cocky and arrogant"; elsewhere, the two teams they'd beaten to earn their reputation, Baylor and Texas, were exposed in lopsided routs at the hands of TCU and Oklahoma. WVU plummeted ten spots in both polls and showed up only as a distant speck in the initial BCS standings.

That's how quickly a season can turn with one loss. A second, at home, pushes Big 12 and BCS ambitions out of reach and threatens to send a season brimming with opportunity into a spiral that ends in the league's unofficial, barbecue-stained embodiment of disappointment, the Buffalo Wild Wings Bowl. Every goal in West Virginia's sights when it set off for Lubbock, it can still save on Saturday.

2. There's a certain tortoise-and-hare aspect to this matchup, reputation-wise, which for once happens to be entirely accurate. In terms of the standard measures of total offense (yards per game) and scoring offense (points per game), K-State can barely begin to compete with West Virginia, which still ranks in the top ten nationally on both counts despite last week's setback. The Wildcats aren't even in the top half of the Big 12 on either count. But that's mainly because they're just not interested in competing on those terms. 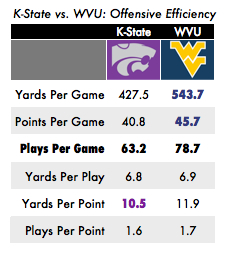 Based on personnel, the idea of Collin Klein attempting to run an up-tempo spread package that calls on him to put the ball in the air 43 times per game, as Geno Smith does, is a non-starter. (Klein is averaging just shy of 20 passes through the first six games, and has only attempted more than 30 once in his career; if he ever gets to 40, Bill Snyder may require medical attention.) But for what Kansas State wants to do most of the time – methodically move the chains while bludgeoning the clock – Klein is the perfect combination of manager and workhorse. Adjusted for tempo, he's every bit as productive within that context as Smith is in the "Air Raid": Though Kansas State is averaging fewer plays per game than all but four other teams nationally, the average K-State snap goes for 6.8 yards to West Virginia's 6.9, and the Wildcats requite slightly fewer yards or plays for every point they score.

When you add it up, that comes out to about two extra possessions (i.e. scoring opportunities) per game for West Virginia's offense over Kansas State's, which results in five more points per game on the scoreboard. But it also means two extra possessions per game that the wretched West Virginia defense has to be on the field that Kansas State's defense does not. Not coincidentally, the Wildcats' average margin of victory (+24.3) is almost three times as high as the Mountaineers' (+8.3) against comparable schedules.

3. If Klein is going to deliver a big, head-turning box score that lifts him out of the "tough/gritty/winner" category and into the All-American/Heisman conversation still dominated by Geno Smith, this is the game to do it: The last four quarterbacks who have faced the Mountaineer defense have combined to complete nearly 70 percent of their passes for 1,663 yards, 15 touchdowns and an obscene pass efficiency rating of 192.8. Two of them, Baylor's Nick Florence and Texas Tech's Seth Doege last week, have gone over 500 yards and five touchdown passes apiece on 12.1 yards per attempt. The only defense in the Big 12 that's given up more yards or points is Baylor's; the only defense in the nation that's been worse against the pass is Army's. 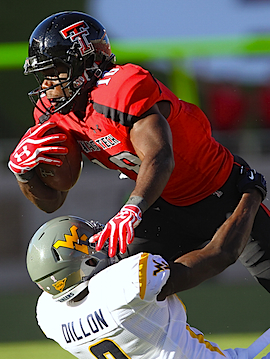 There's no available data on how well the Mountaineers defend a running quarterback, although they are significantly better against the run, in general. Much more so than the past few weeks, that will have a lot to do with how good they are Saturday against the pass, too, which in K-State's case is still largely a play-action affair. But it's not conservative: Klein is among the top ten nationally in yards per attempt (9.1) and completion (13.7) – again, better than Smith on both counts – and his top four receivers all average north of 13.5 per catch. Again, just because they don't do it often doesn't mean they don't do it well, although a K-State offense that's forced to put the ball in the air more often than it would like is vastly preferable from the defense's perspective than one that gets to pick its spots.

4. The Wildcats can make the Big 12 race very, very simple with a win, thereby a) Further entrenching them at the top of the standings, b) Giving them the best pair of road scalps anywhere in Oklahoma and West Virginia, and c) Forcing the rest of the country to deal with them as national contenders. They never made that leap last year, despite the 7-0 start, mostly because of the backloaded schedule – the only ranked team K-State beat en route to 7-0 was Baylor, and even then, no one really believed in Baylor until much later in the season. The first time the 2011 Wildcats saw a real contender was against Oklahoma on the last week of October, and they were subsequently trounced by 41 points at home; the following week they came up short at No. 3 Oklahoma State, and that was that for plucky Kansas State in the national conversation. For the current team, the early upset in Norman created the opening to get back into that conversation, and West Virginia gives them the opportunity to walk through it.

A West Virginia win, on the other hand, would create a four-way knot at the top of the standings between the Mountaineers, Sooners, Wildcats and the winner of TCU/Texas Tech that I don't even want to begin to contemplate how to untangle. Suffice to say, WVU can make the next month very interesting.

5. Predictions…
• Participants in the Collin Klein "Tough/Gritty/Winner" drinking game black out in the third quarter.
• Geno Smith is picked off for the first time this season, probably by K-State's All-Big 12 corner, Nigel Malone.
• Despite the early struggles, Smith finishes with at least 350 yards passing and multiple touchdowns, the majority of it going (as usual) to a slightly hobbled Stedman Bailey.
• The Mountaineer defense holds K-State below four yards per carry, forcing the Wildcats into obvious passing downs, thwarting play-action and stalling potentially long, clock-killing drives.
• West Virginia wins, 31-26.