New Ags on the block still have something to prove, but after back-to-back slugfests against Florida and South Carolina – and with Alabama just a bye week away – banged-up Tigers will settle for survival

1. LSU and Texas A&M played on a near-annual basis for most of the second half of the last century, from roughly World War II through the first round of conference expansion in the mid-nineties, and they've traditionally gone head-to-head over a lot of the same recruits, especially in Houston. The Tigers' trip into College Station Saturday is their first since 1995, when most of the current rosters were just graduating from grammar school. but it's not exactly a collision of Venus and Mars.

After devouring a sampler of some of the SECs milder dishes over the last month, though, it is A&M's next big chance to claim a seat at the league's adult table, where the conversation this time of year begins turning to national championships, BCS bowls, secret rituals overseen by Johnny Majors involving the psychic channeling of Shug Jordan, and other exotic spoils. (All catered by Golden Flake, of course.) The Aggies looked the part in their only other encounter with one of the conference's heavy hitters, Florida, which only escaped Kyle Field with perfect record intact after clawing out of a 17-3 deficit in A&M's season opener last month. 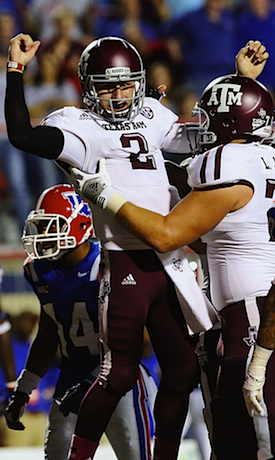 At that point, they were uncertain about how they stacked up against the upper crust in terms of overall talent or depth, and they certainly didn't know yet what they had on their hands in Johnny Manziel, the redshirt freshman quarterback best known for his shirtless mugshot over the summer. They do now, and with three consecutive road trips on the horizon, they know that a banged-up, battle-weary outfit facing its third ranked opponent in as many weeks may be their last, best shot at bringing down big game.

2. Where LSU is concerned, this game falls into two relevant categories, a) Road Games and b) SEC Games, and the Tiger offense has been an undeniable drag in both. In two road games, they've reached the end zone once, scored 18 points and converted a grand total of seven third downs. In three conference games, they've generated twice as many turnovers (6) as touchdowns (3). In fact, Auburn, Florida and South Carolina scored as many touchdowns off those turnovers as LSU scored in those games, period.

On paper, if there is a difference between the team LSU fans have seen through the first seven games and the team they thought they were going to see – i.e., the team that ran roughshod over the rest of the conference last year like a Cajun Genghis Khan, eradicating all non-Crimson elements of the schedule by an average of 30 points per game – it is the turnover margin. Through seven games, the 2012 Tigers are actually averaging more yards (395.7) and allowing fewer (219.6) right now than the 2011 Tigers were after their first seven games, at which point the latter were ranked No. 1 and had not been challenged. But the 2012 Tigers have also turned the ball over 12 times, four more giveaways than the 2011 edition committed in the entire regular season.

At the height of last year's run, from mid-September through the end of October, LSU went five consecutive games without a single turnover on offense, while also generating 11 takeaways on defense, and outscored opponents in those five games by 150 points. Its last three wins in 2012 have come by a grand total of 20 points, and that's counting a 38-22 triumph over Towson.

3. At this point, it's impossible not to shackle that boulder to quarterback Zach Mettenberger, who has served up potentially killer interceptions each of the last two weeks against Florida and South Carolina after fumbling the ball away twice at Auburn and once more against Towson. The first half interception he served up last week to South Carolina's Jimmy Legree –

– was the biggest jolt for Carolina while its offense spent the night attempting to play its way out of a burlap sack bound for an especially dark, swampy stretch of I-10. The good news for the offense out of that effort was the sudden reemergence of a viable ground game behind a patchwork line missing three regular starters, and a potential spark in the backfield in freshman tailback Jeremy Hill. The Tigers patiently wore down the Gamecocks' athletic, blue-chip front, which failed to record a sack for the first time this season and eventually broke and Hill's icing, 50-yard touchdown run in the fourth quarter.

But if there is a reliable playmaker among the receivers, he may as well be in witness protection, because he has yet to be identified. If LSU gets its way, there won't be any reason to blow his cover against A&M. 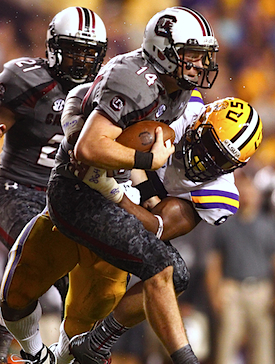 4. Which brings us to the main question: Can A&M draw the Tigers into its kind of fight? The Aggies have been outrageously good on offense over the last five games, most notably in the process of nuking Arkansas for 716 yards on more than nine yards per play three weeks ago, in the game that saw Johnny Manziel set a new SEC record for total offense in his second SEC start. Last week, they dropped 678 yards (283 rushing, 395 passing) and 59 points on Louisiana Tech. In between, they rallied from 10 points down in the fourth quarter to beat Ole Miss on a pair of late touchdowns. Manziel is the most productive all-purpose quarterback in the conference, his top five receivers average nearly 15 yards per catch with a dozen touchdowns and the offensive line is anchored by a pair of future first-rounders on either end.

So… yeah,totally awesome, but is any of that remotely relevant when it comes to LSU's defense? As prolific as Texas A&M has been offensively, the Tigers have been equally stingy, as usual, setting up shop right behind Alabama (again) in terms of total defense. The only quarterback in the last two years to manage an above-average pass efficiency rating (i.e. north of 130.0) against LSU was Arkansas' Tyler Wilson last November, when the Razorbacks finished with a single offensive touchdown in a 41-17 rout. The only defense A&M (or Manziel) has seen that remotely resembles LSU's athletically or on paper is Florida's, which took a couple quarters to figure the Aggies out in the opener but shut them down completely in the second half once it did, allowing the Gator offense to rally out of the halftime hole for the win.

On the other hand, LSU hasn't faced an offense that can (or is willing to) spread the field, push the tempo and potentially force the Tiger offense out of its punting-is-winning bubble. The closest they've seen the last two years was on a visit to West Virginia last September, when the Mountaineers managed to rack up 533 yards of total offense but needed 87 plays to get there and committed four costly turnovers in the process; LSU turned all four into points in a 47-21 cruise. Manziel is a very different quarterback than Geno Smith, and these Tigers have not been nearly efficient in the giveaway-takeaway game, on either side of the ball. But if I had to guess, a big stat line by the Aggies undermined by a couple of critical mistakes by their redshirt freshman QB sounds like a script both sides can follow.

5. Predictions…
• After showing up in a long-sleeved windbreaker in nearly 90-degree temperatures at Florida, Les Miles stalks the sideline authoritatively in the Gore-Tex jacket worn by Georgia Constanza in the 1994 Seinfeld episode, "The Dinner Party.".
• A&M connects on a couple of big plays early and takes a lead into the half, but is gradually worn down in the fourth quarter.
• LSU goes over 200 yards rushing for the second week in a row, though no individual back hits the century mark.
• With the game on the line, LSU's defense forces Manziel into a decisive turnover that sets up the offense to deliver the dagger.
• LSU wins, 26-17.